Tess Felber of Cumberland and Greg Bohenko of Westford, Massachusestts are set to wed in the Ballroom at the Providence G on Saturday, November 2, 2019. 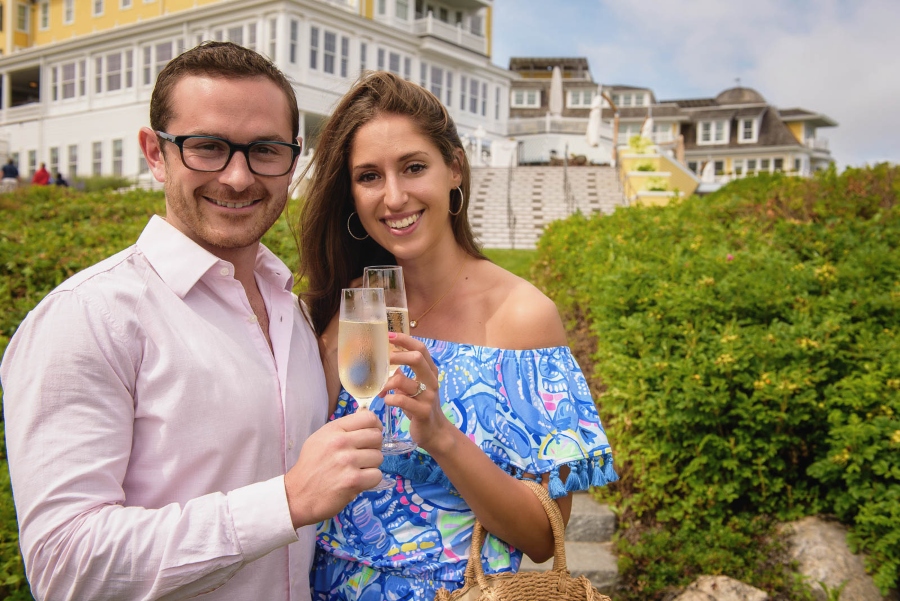 Greg and I met at the Providence G roof deck through mutual friends in August 2014 and have been together for 3.5 years. We both lived in Boston but a group of us had a trip to Block Island planned for the next day and decided to meet in Providence the night before. We spent the next 3 days together but our romantic relationship didn’t start until that December. When we started getting serious I knew we had to get married where it all began, the Ballroom at Providence G… How many people can say they got married exactly where they met? 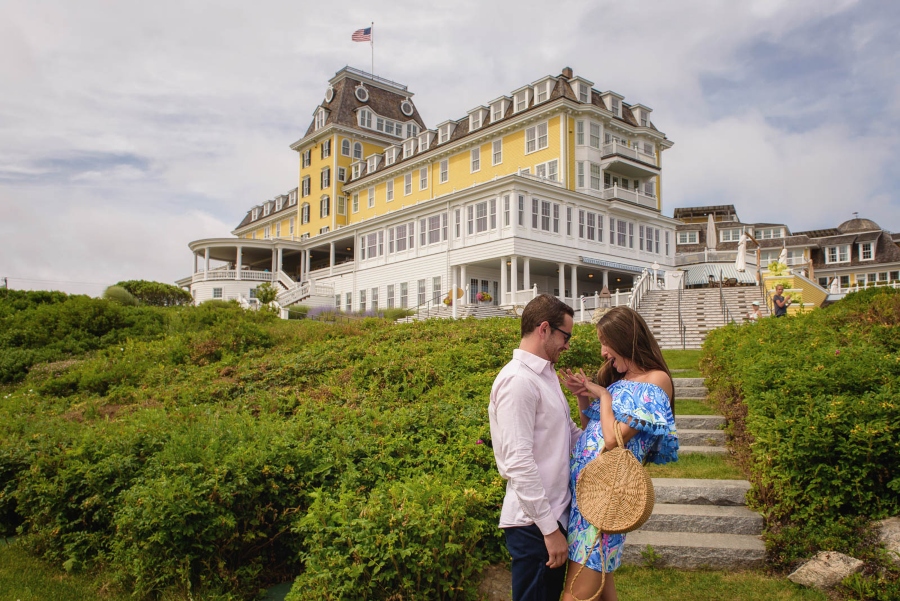 Since our love story began in Rhode Island it only made sense for Greg to propose there as well. After being busy all summer away on bachelorette weekends, bridal showers and Cape trips, Greg snagged the only free weekend in July and suggested that we take a weekend trip just the two of us. I suggested Watch Hill, so we booked a hotel and he invited my parents down from Cumberland for dinner since we hadn’t seen them in weeks.

On July 21st, we drove down to Westerly for a day at Misquamicut beach (during the ride Greg was in the passenger seat reading blog posts on how to get down on one knee) before we were supposed to “meet his friend who got us the dinner reservations” for a drink at the Ocean House at 3 p.m.

After the beach, we got back to the hotel around 2 p.m. to get ready, and while I was in the shower, Greg said he had to “run to the car to grab something.” That was the first time I thought something was up. Come to find out, he got a call from the planner at the Ocean House telling him he could no longer propose at the hotel at 3 p.m. due to a “high profile guest” visiting so he could no longer use the photographer he hired to take secret photos either. 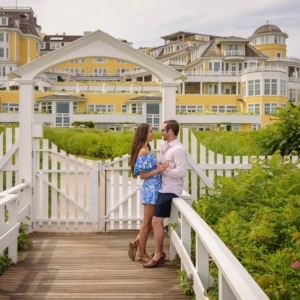 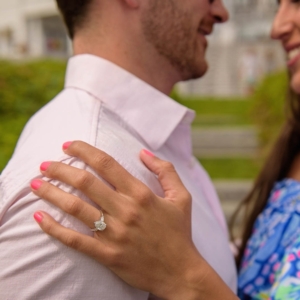 We still left the hotel around 2:45 for the night, but before we did anything I needed to eat since we hadn’t had a meal all day and I get extremely hangry. I dragged him to a sandwich shop on our way to the Ocean House and ordered a salad. While I was ordering, Greg was behind me extremely distracted and texting the planner and photographer to try and still pull off the plan to propose at 3 p.m. After he noticed I ordered a salad, he ran up to the cook’s window and asked how long it would take. They said 15 minutes and he asked if it could be done now…This was so out of character for him. My salad came out a few minutes later (let’s say 2:52), and after taking 7 gigantic bites and eating as fast as I ever have, he picked up the plate and threw it in the trash! I looked at him and said “WHAT IS YOUR PROBLEM!”. He insisted we could not be a minute late to “meet his friend at 3”.

We left the sandwich shop and as we were walking up the street to the Ocean House, he grabbed my hand and started talking about the day we met, when he first fell in love with me and all these other sweet things all while trying to cover the ring box in his other pocket. I was still so clueless at this point. He led me to the hotel’s lawn in the back facing the ocean which was confusing since there is nothing back there. We walked down a set of stairs that led to a few benches where he pointed out his friend (a.k.a. a stranger). At the bottom of the stairs, he got down on one knee, pulled out my DREAM pear-shaped ring and asked me to marry him! I had always expected him to have this elaborate speech but with the pressure of the photographer and the strict timeline, he used that time on the walk up for that. 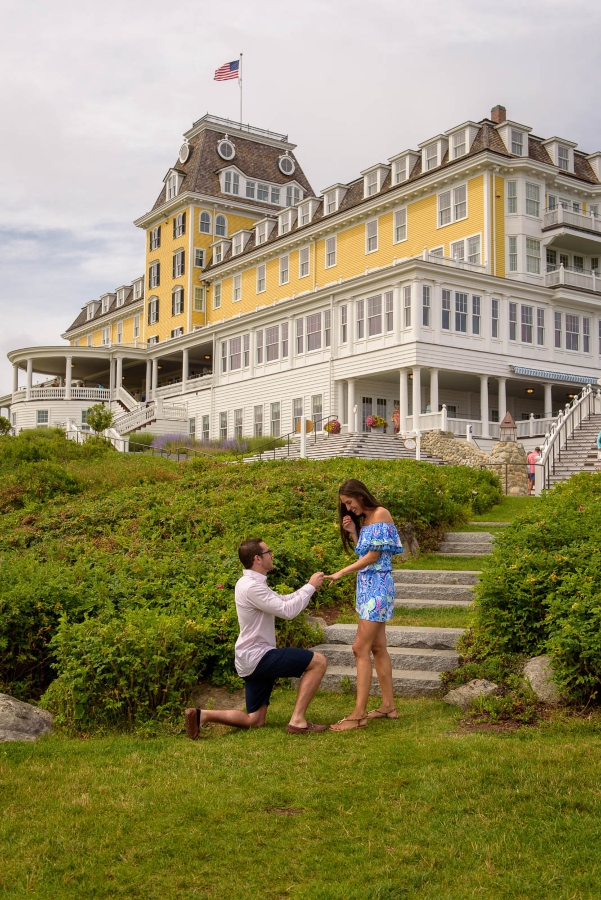 Immediately after, out came a photographer who was taking photos of the entire thing (which I always wanted!) accompanied by the hotel planner with a tray of champagne. We did a full engagement shoot taking photos around the Ocean House’s grounds!

I knew my parents were meeting us for dinner at 7 p.m. but Greg also surprised me with having his brother and mom meet us, too! July 21st, 2018 was truly the best day of my life. I’ve never felt more loved, and now November 2019 can’t come soon enough! 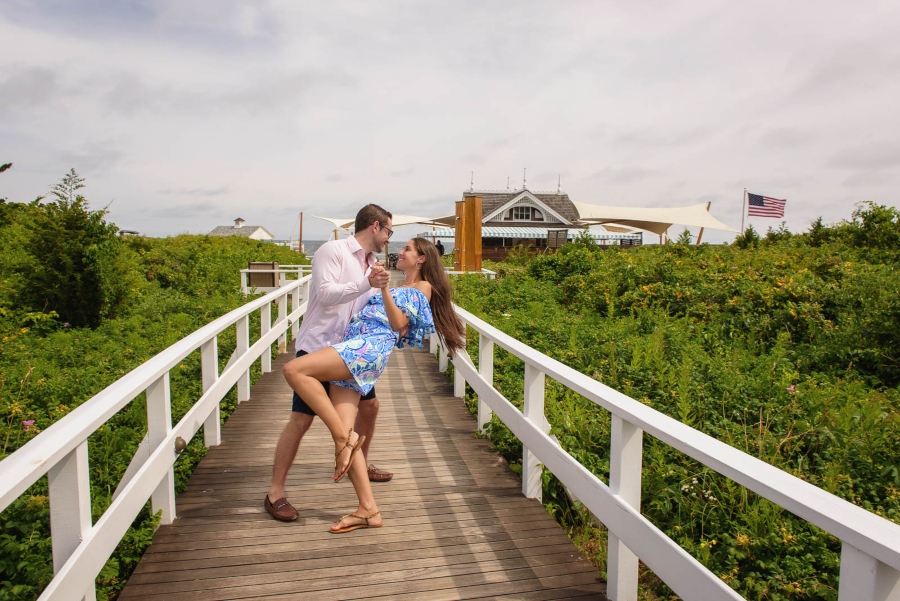