He likes to say it was a blind date, but it really was more complicated than that!

My co-worker called me one Sunday morning and said she had gone to a bar the night before; her neighbor happened to be there and she ended up hanging out with him and his friends. She said I should meet her neighbor’s friend, Mark, and that  we’d really hit it off. I thought this sounded like a terrible idea! I don’t like to meet men in bars and with one more degree of separation, my co-worker meeting someone in a bar… that seemed odd. She didn’t even know this guy!

But I agreed to go to a group dinner with my co-worker, a third lady we worked with, her neighbor and this mystery guy. We went to Grille on Maine in East Greenwich and it went well, a little awkward considering. After dinner (on a Wednesday night) we went to the original Fat Belly’s in Warwick. I don’t really drink so this seemed like it could go downhill real fast. But Mark noticed I didn’t order a drink, so he asked, “What do you like to drink?”

I responded with, “Um, I don’t know, I don’t drink much.” He asked if I liked sweet things, I hesitantly said yes, assuming the next thing out of his mouth was going to be a really awful pick-up line, or he was about to order me some sugary “girly” drink. But instead he said nothing and disappeared into the kitchen of the restaurant. Later, I found out he used to live in the apartment above the restaurant, so his wandering into the kitchen was less strange than it seemed at first impression. He came out of the kitchen with a huge smile on his face and a plate in his hand. He said, “Here! Do you like pears?” At first I just stared at it. Had he really just asked someone in the kitchen to slice up a pear… for me… for us? This guy was different, he was special.

So I spent the rest of the night snacking on a pear, drink-less, and talking about who knows what. When we left he shook my hand and did not ask for my number. I though that was a bad sign, but looking back, it’s Mark, he probably just forgot. Two days later he called me and we talked for an hour. We had our first date a week after that, and saw each other every weekend, then almost every-day, until we moved in together two and a half years later. Then five years after that he proposed! 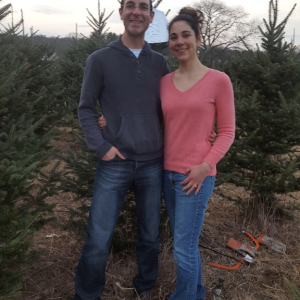 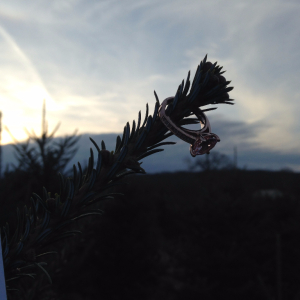 We were at the Farmer’s Daughter Tree Farm in South Kingstown looking for our ‘cut your own’ Christmas tree. I’m a little Christmas obsessed, so we went trudging through the woods in search of the perfect tree. When we started down the path I said, “Oh! You forgot the saw in the trunk, lets go back and get it before we get too far into the trees.” But he said, “No, we’ll get it later.” Of course this made me a little annoyed. Sighing, I said, “What? No! That’s silly, lets just get it now while we’re here!” He told me he really didn’t want to carry it around, so on we went.

Then, maybe five minutes later, he said he needed to go back to the car to get tissues because his allergies (he is allergic to… everything) were acting up. As he walked away I yelled, “Don’t forget the saw!” When he came back, saw-less, he looked like he had just seen a ghost. I asked what was wrong, if he had seen someone get hurt in the tree wrapper machine?! He said no, and that he was fine, nothing was up. Then, in a split second, I knew he was going to propose. I instantly regretted not having washed my hair; it was still in a knot on top of my head from teaching at my studio, Pilates Stance, that morning. Yup, that’s the first thing I thought of.

We walked around for what seemed like forever, taking pictures of the beautiful day. When we found the tree, yours truly got sent back to the car to get the saw. I was so nervous, I had wished and hoped for years that this would happen — was I just reading too much into it? He only looked this terrified one other time: when he bought our house! At least ten to fifteen minutes later, I returned to the tree with the saw. He had a cardboard cut-out shaped like a gift-box tag tied with red ribbon to the top of the tree. The tag had my name on it. Below that, on the edge of a branch he hung the engagement ring. An absolutely stunning rose gold ring with morganite and white sapphires! I looked at it, then looked at him, he took the ring off the tree, got down on one knee, and simply said, “I love you, will you marry me?” I wasn’t crying, or talking. I started to hyperventilate, so I got down on the ground with him, started to cry and said yes!

Then we found some fellow tree searchers to take our picture. We cut down the tree and then I took about a million pictures of the ring as we drank hot cider by the fire pit. It was a gorgeous setting and wicked romantic! Hard to believe that the first thing I did after putting the most expensive thing I own on my finger, is help carry a tree! With my right hand of course 😉
Then, on the drive home we said, “Do you smell that?” Yup, apparently in all the hub-ub I had knelt in some deer poop.

And so our love story continues… 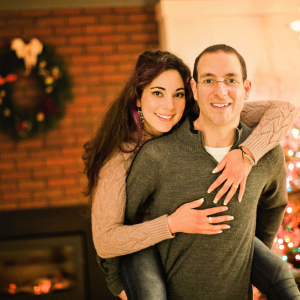 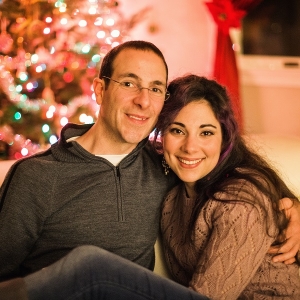