Kristen and Mike
Prev Next
Search

A bit of rain on your wedding day is supposed to be a good omen, right? So, clearly, major nearby flooding must mean these two are destined for a lifetime full of nothing but love and happiness (we already knew that after talking to the lovebirds, though).

We met each other for the first time on New Year’s Eve senior year of high school and coincidently ran into each other again just a few weeks later at a high school basketball game. We went to rival high schools so it made things very interesting. We then went on to different college and stayed together for the four years, moved into an apartment together, bought a house and got married (with lots of awesome times in between). 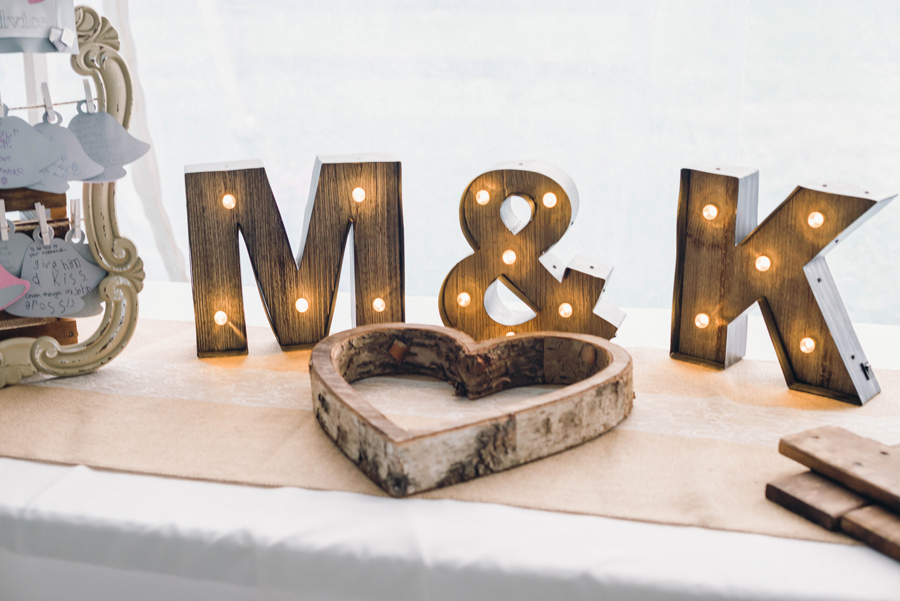 How did you get engaged?

We were together eleven years before we got engaged. We went away to Portsmouth, New Hampshire for the weekend. After an evening out, wandering through Portsmouth, we ended up sitting on a bench at the base of the Memorial Bridge. After an awkwardly led conversation, Mike finally mustered the courage to pop the question. And all he did was kneel down, open the ring box and froze. It wasn’t until I knew what he was doing that I said, “Well, are you going to ask?!” 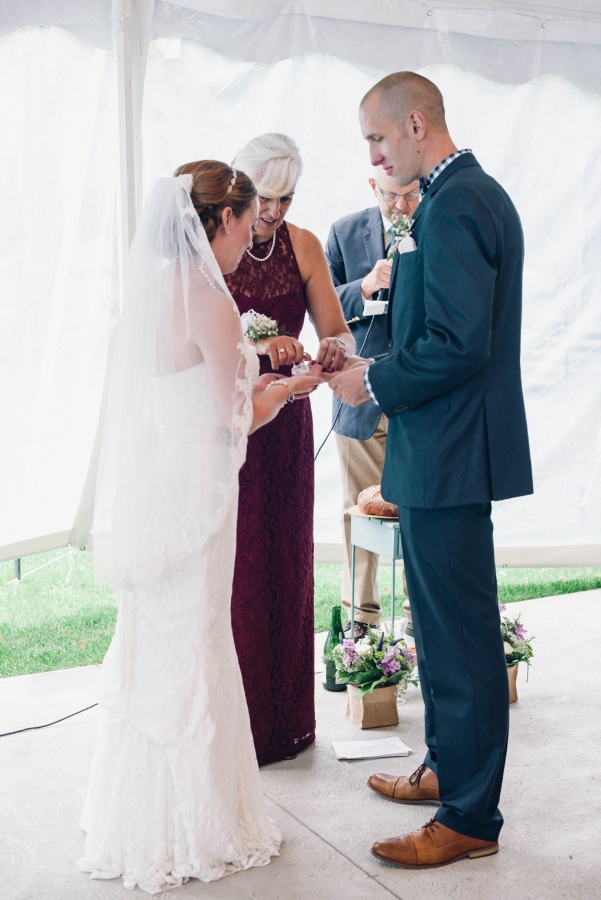 What were you favorite and least favorite parts of planning?

At the beginning stages of planning, I gave Mike the option of helping or being surprised the day of. He chose to be surprised but wanted a say in the food and he got his wish. I enjoyed doing all the decorations and trying to recreate different ideas I had seen on Pinterest. There were many weekends spent with family and friends creating signs, painting, and crafting in general. I would say the part that was difficult (not so much the least favorite part) for me was answering phone calls and emails. Since I am a teacher, I was unable to contact anyone during the day. And would spend nights planning for school and answering emails. Thank goodness for emailing though! 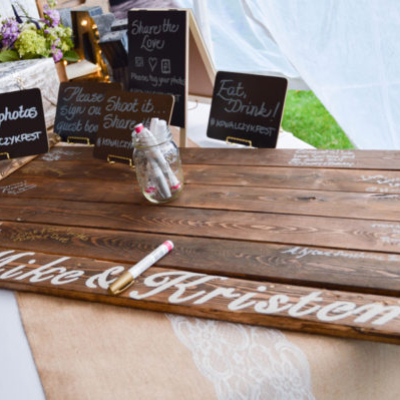 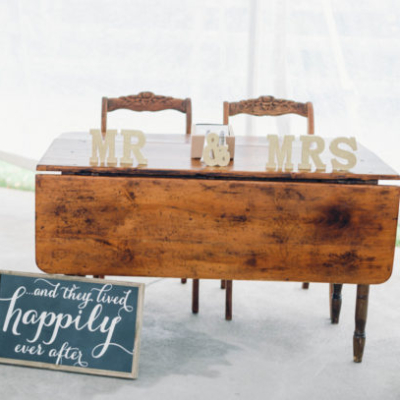 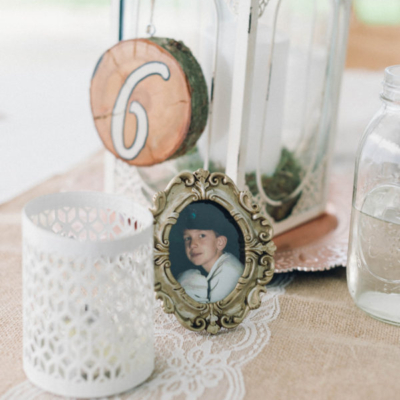 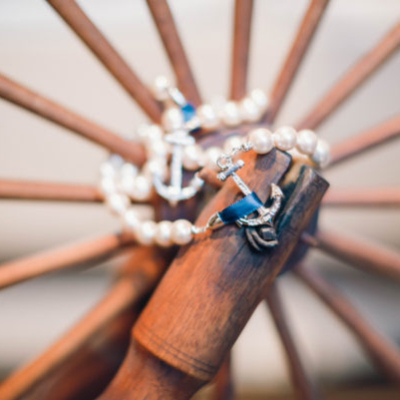 Your dog is so cute! What is his/her name?

He is our 10 year old boy, named Bruschi. He was part of the ring bearer crew and wore a Go Pro for the wedding. He had the best night ever going from table to table greeting everyone. He even got snacks from the caterers. While I was getting ready, in the bridal suite above the barn, Mike sent Bruschi up on secret missions to see me so he could sneak a peek of my dress. 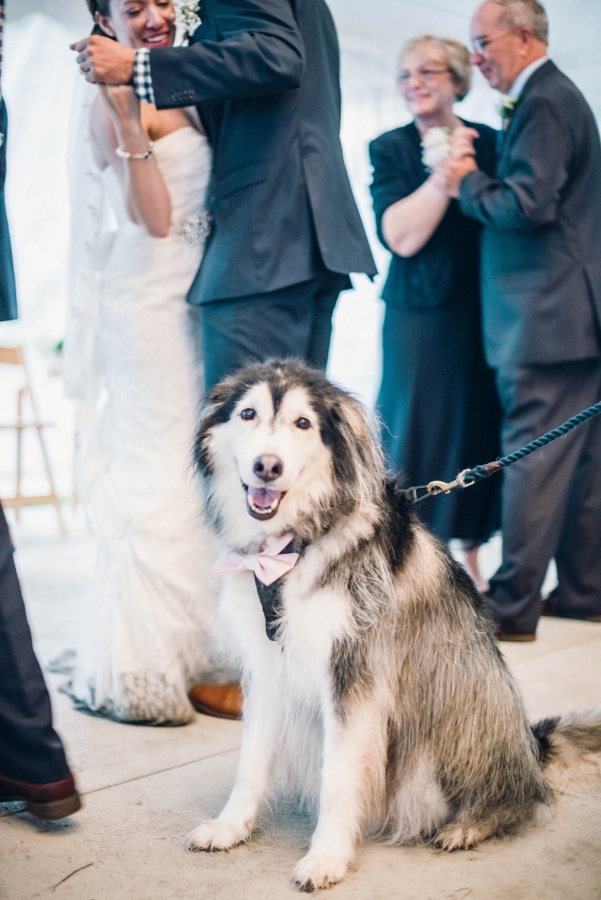 What drew you to Terrydiddle Farm?

My sister (who helped with planning) had gone to a cookout at Terrydiddle and she showed me pictures and it was gorgeous. I looked it up online and loved the small farm feeling. The grounds were beautiful, and I envisioned putting lawn games out and having the fire pit going. I loved the “backyard” wedding meets farm feel that I got from there. After we chose it for our venue, I decided to go with a rustic chic theme to fit the setting. The simple and laid back feeling really fit us as a couple. Since it rained, we didn’t get to put the lawn games out or use the fire pit, but the scenery was still beautiful. Terrydiddle Farm was also welcoming to our dog, Bruschi. He is such a big part of our lives and we couldn’t imagine getting married and him not being a part of it. 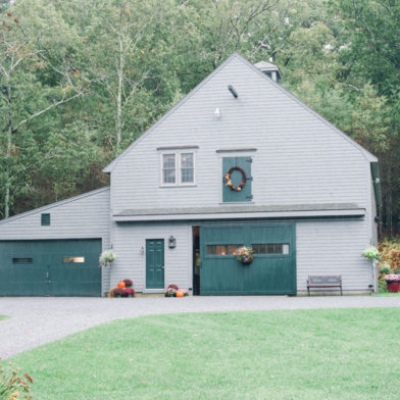 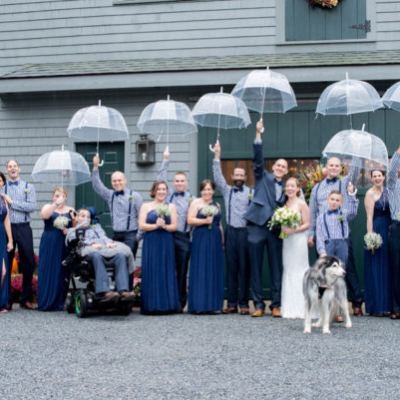 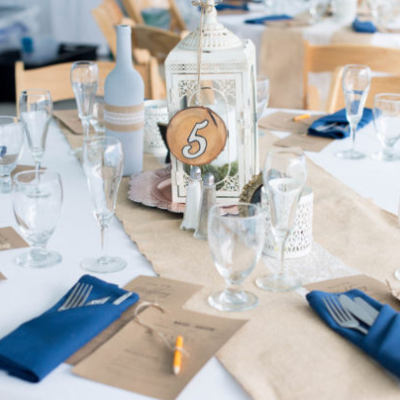 Did you find the rain stressful that day or was it more something that you rolled with?

We totally just rolled with it. And it wasn’t just a little bit of rain, there was major flooding! My dress was a dirt colored ombre by the end of the evening. My dad ran around that morning getting umbrellas and the venue provided the clear umbrellas for the pictures…thankfully! It’s not easy to find clear umbrella’s so last minute.

Who are the little girls that spoke at your ceremony?

My nieces, Mimi and Payton. They read “An Uncommon Love” by Terah Cox.

What was your first dance song?

“No One” by Alicia Keys — a memorable song from when we first started dating. 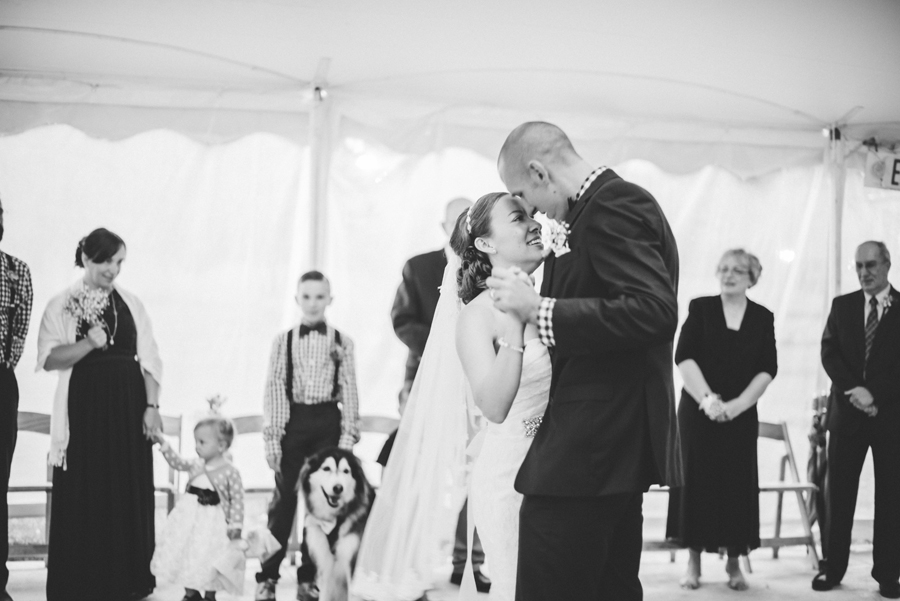 Judging by the “First Grade Wedding Advice” that was on display, I’m assuming one of you is a first grade teacher?

I was at the time (now teaching 4th grade.) They threw a shower for me a week of my wedding and surprised me with all of the advice. It was so cute, so I knew it needed a place at my wedding for everyone to read. One of our favorite pieces of advice was a message that one of the little boys in my class wrote: “To be nice to my husband and to give him a kiss (even though it’s gross!)” 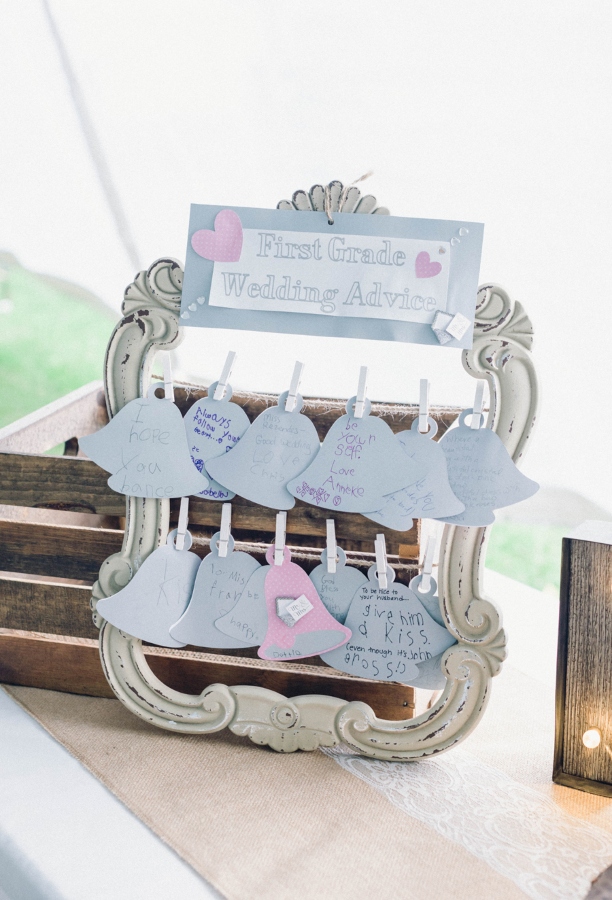 Was there a vendor that you were particularly impressed with that day?

Sierra Rudkowski of East Passage Photography. She has just recently gotten married, so she had a lot of tips and advice that was very helpful. At the last minute, my ceremony musician was unable to play. So, at a week out, I asked Sierra if she knew anyone and she offered up her husband to play. He did a great job and we were so thankful! 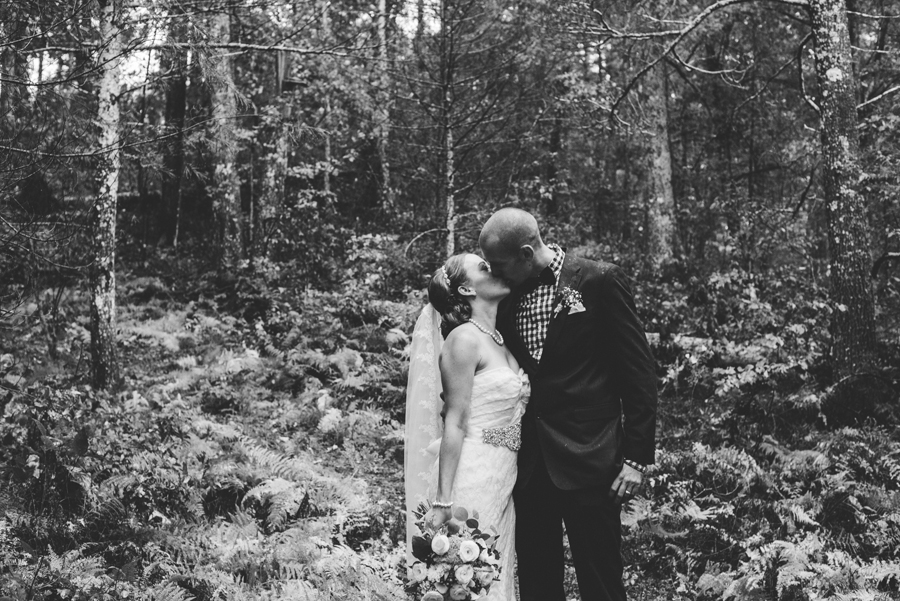 If you had to narrow it down, what would you say were each of your favorite moments from that day?

Kristen: I would have to say it would be re-entering the tent as husband & wife to “Flight of Valkyries” and seeing all of our family and friends chanting “Yes! Yes! Yes”.

Mike: I loved that my brother-in-law brewed up a craft beer just for our wedding day. It helped keep our guests from remembering that it was rainy outside.

Do you have any advice for recently engaged couples?

If it rains, enjoy it! There is nothing that you can do about it! Don’t sweat the small details and have fun during this process! 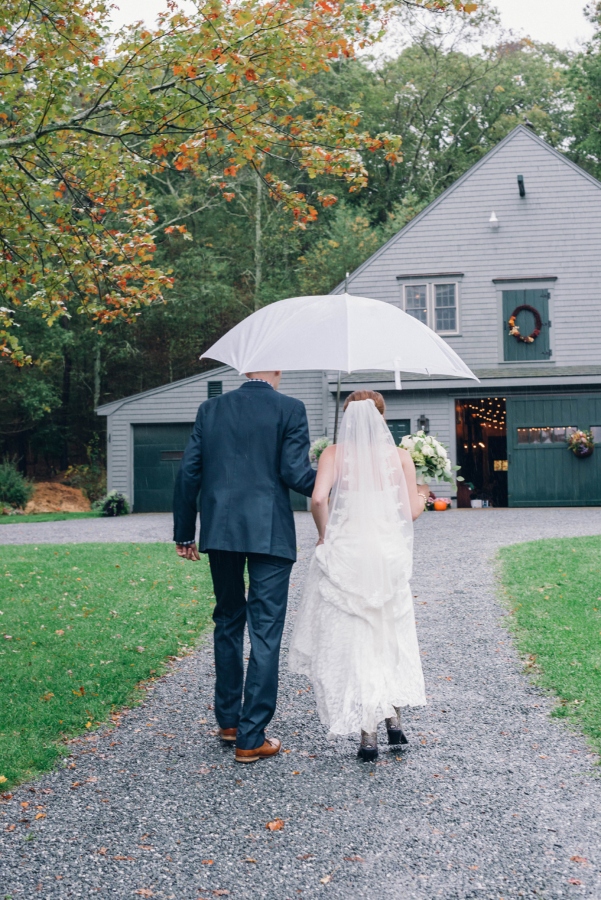