Band versus DJ. DJ versus band. This is always a hard decision when it comes to the wedding planning. 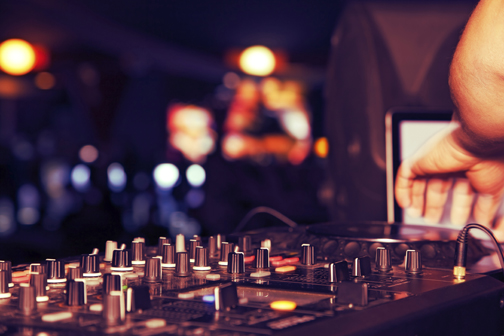 Some people like to hear the original songs while others like the vibe of a live band. We’ve been to many weddings and have heard everything. Adam and I are old school so we opted for the band…back to the online inquiry forms!

We researched when and where some of the bands we were interested in were playing, and off we went for some listening and cocktails. (This had to be my favorite part so far — cocktails and dancing all while doing wedding research? Yes please!) Too old, too loud, no female singer, no horns….It was tougher than we thought. My dad, the pro researcher, called one of the bands that we were interested in (our top choice, actually, but they were already booked) and asked them who they recommended. The leader of the band told us about GQ and The Lady, who played at his anniversary party (good enough for me!) so I called and booked them without even hearing them first. Linda, the lead singer, told me about an upcoming wedding they were playing at Fort Adams in Newport. She okay’d it with the bride (that we could come and listen after dinner) so we headed down to Newport. Adam was away on business so Adam’s parents were in one car and me, my parents and Lauren (one of my trusty maid of honors) took the long trip from Cranston to Newport to listen to the band.

We arrived at Fort Adams around 9 p.m. and there was a sign with an arrow at the entrance: Mr. and Mrs. So-and-so’s Wedding. We entered the park (now this is a LARGE park), and started driving around. That first sign was the last sign we saw. We drove around the park for about an hour with no luck, as there are several locations within the park that can accommodate a wedding. We found houses in the park that we didn’t know existed, asked random people sitting on porches where the wedding was, saw a little family of raccoons cross the road, all while sticking my head out the car window trying to listen for music. We decided to call it quits.

Just as we were about to leave the park we heard a sound: the sound of a band. We followed the sound and ended up next door at Hammersmith Farm — the childhood summer home of my idol, Jackie O. We drove in, passed a few ‘no trespassing’ signs (nothing was stopping us now) and finally came upon a tent and a wedding with a band. We walked right up to the tent and started looking. “Is that them? I don’t know. It has to be.” I got a waitress’s attention and asked her who the band was. She wasn’t sure. I told her we were looking for GQ and the Lady. She tells us that wasn’t them, but she knows of them and could not stop raving. That was comforting, but I still wanted to hear them.

By then it was after 10 p.m. and time to give up the search. We all headed to Castle Hill Inn for a drink. That’s where my father and my future father-in-law started blaming me for having wrong date, the wrong time, etc.

Now, I’ve been known to get things wrong before, but I knew I was right. And right I was: I emailed

Linda that night and asked her where the heck the band was playing. Sure enough it was at Fort Adams.

Very well hidden with no signage. I hope the actual guests made it to the wedding.

P.S. Since that night we have seen GQ and the Lady many times. They are a great band and a perfect choice. Everyone better bring their dancing shoes August 30!

Sarah: The Bridesmaids and Groomsmen