Suit Up with Marc Allen Fine Clothiers
Prev Next
Search 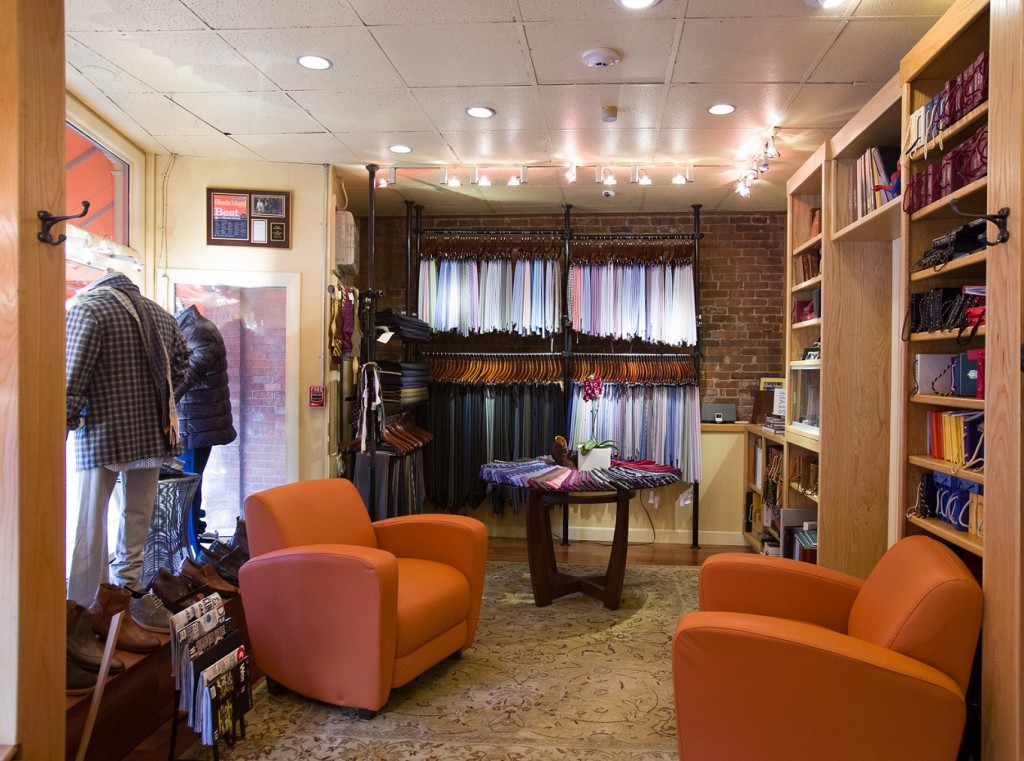 For all those Rhode Island grooms who want to look good on their wedding day but have no idea where to begin, Marc Allen has your back.

“Everyone who’s ever married always says, ‘It’s her day,’” Marc Streisand, owner of Marc Allen Fine Clothiers, points out. “But I like to think of it as their day.”

Many grooms become consumed by the idea of making sure that their wife-to-be is happy and satisfied on their wedding day. As such, the guys sometimes forget that that they’re actually getting married, too. The team at Marc Allen Fine Clothiers likes to serve as a reminder.

“A groom should feel just as confident and strong about the way that they’re dressed,” says Will Arvanites, a personal clothier at Marc Allen. “And that’s what we try to convey to them.”

But the truth is, before popping the question, most men don’t put much thought into what they will wear at the altar. The bride already found her dream dress on Pinterest and lined up several fitting appointments while the groom is a bit slower going.

“What’s interesting is that this generation is much more interested in dressing well than mine was at that age,” Streisand says. And yet, “it’s actually amazing how insecure, or unsure, guys are.”

Millennials are at the age where getting married is not only acceptable, but expected. For many, this is their first venture into purchasing a really well-made garment. Streisand and his team are invested in making sure that their experience is not only pleasant, but fun. This sentiment is clear from the first moment you step into their shop (I only had the pleasure of visiting their Providence location, but I’m sure the same can be said for their showrooms in Newport, Boston and New York as well). Not only will you be greeted as though you were an old friend by Streisand, Arvanites or another team member, but you’ll immediately be given a seat in a comfy orange lounge chair and a drink of your choosing. Guests can pick their poison: water, coffee, scotch, they have it all. From there, the meeting is just like going on a first date (and, luckily, you’ve already found your soulmate, so there’s absolutely no need for nerves).

“We’re interested in getting to know a person,” says Arvanites. “What they do, where they get their clothing, what they do for fun, where they live and so on. That helps us kind of feel out what their taste level is, and figure out where to start.”

Then, of course, you’ll talk about your impending nuptials — everything from when they’re taking place to your partner to the overall theme. These little details help the designers plan a lot more than you’d think.

“For example, if we find out it’s a destination wedding, somewhere in the islands, we’ll automatically know to use a different kind of fabric,” Streisand explains. “He’ll already be nervous, sweating under the collar, so let’s make his fabric light enough that he can be comfortable.”

They also like to know if you’re planning to wear the piece again. Unlike a wedding dress, suits, in particular, can be quite versatile, whether you’re planning to use it for work functions, date nights, special occasions, etc. This men’s formal wear company wants to make sure that clients get their money’s worth by making something that can serve as your go-to piece from there on out.

And you’ll never feel pressured. Arvanites points out that shopping is typically less of an enjoyable experience for most men, mainly because they don’t feel comfortable.

“We never want people to have that ‘buyer’s remorse’ kind of feeling,” says Arvanites. “When you go into boutiques like Bergdorf Goodman or Saks, it’s an intimidating environment. The workers there are posh and daunting – that’s not what we are at all.” The quality of Marc Allen’s clothing is the same as, if not higher than some of the more well-known, stuffier shops, and the Rhode Island based-business provides a different level of service, one that genuinely cares about the patron.

“We have all sorts of clients. Really super wealthy ones, and ones that are just on meager terms but who want one or two really great pieces a year. They come to us to get them because they know we’re going to make them feel good about it,” says Streisand. “It’s not about selling them anything. It’s about them having an enjoyable experience.”

“We take your measurements and work with you to pick out the fabrics. Then the fabric gets sent away to Amsterdam where they make the clothing in a workshop. Then it’s sent back for us to do all the finishing,” says Streisand. “The whole process takes about four to seven weeks.” His newest made to measure line includes a full package deal: A tuxedo or a suit, suspenders, socks, shoes and a shirt all for approximately $2,500.

Streisand explains,“These we make from scratch right upstairs. It can take ten to twelve weeks, sometimes longer depending on the groom’s schedule.”

That being said, grooms should consider beginning their search about four months prior to their wedding, just to be safe. The first meeting can be as quick as ten minutes or as long as one hour. The length usually depends on how many questions the groom has, whether or not he already has a look in mind, etc. “There are certain guys who know exactly what they want and we’re just order takers, at that point,” says Streisand. “But more frequently it’s more consultative for them, so we give them our knowledge and expertise.” 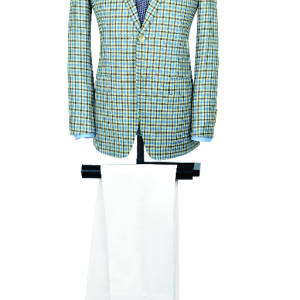 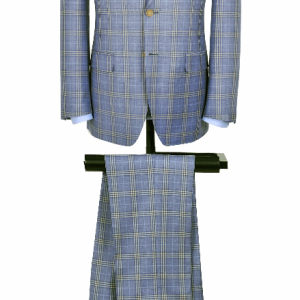 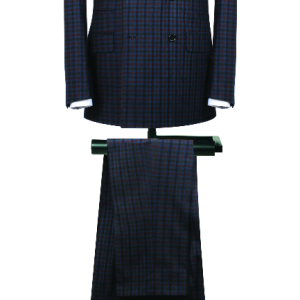 Streisand: I’ve always had a certain idea in my head that when a guy gets married, he should be in a tuxedo. With those, we’re seeing a lot of a single breasted shawl collars, but there’s actually a lot more options nowadays. We’re also seeing a dramatic change in that guys are wearing suits — probably seven suits to every three tuxedos. Suits in all colors, from blue and gray to tan and black.

Arvanites: He wants this kind of gray twill, which has texture to it with a black lapel. He saw one from a high designer but they were out of stock. So that’s where we come in; we can do those kind of wild designs.

Streisand: We’ll do funky linings. We do orange, reds, purples – you name it. I have one groom who just picked out a design with little hearts running throughout.

Streisand: But, if a guy wants a blue suit, we’ll show him a blue suit that has a subtle patterning in there. Maybe a herringbone or something to make it a little dressier than a regular blue suit. It’s just a weave in the cloth that gives it a little more texture, so it looks dressy but still can be worn as a regular suit.

Streisand: We’ve recently remodeled the second floor of the shop to look more like a speakeasy. It’s essentially a man cave. A guy can come in, sit down, have a glass of wine or scotch and just hang out during the fitting. He doesn’t have to worry about anyone else coming in and seeing what he’s doing. People still want privacy, and when you go to a big department store, there’s none of that. You’re out for everyone to see what’s going on. 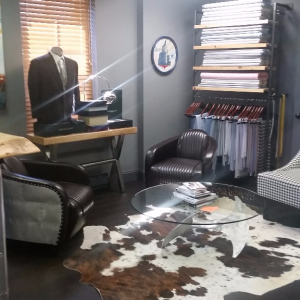 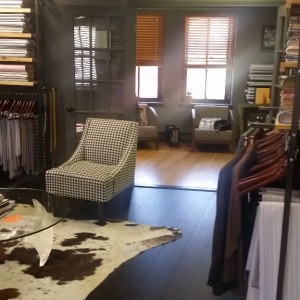 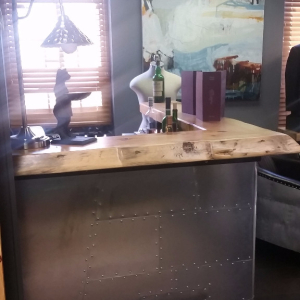 We’ll also do parties up there for groomsmen. The guys will come in and we’ll sit down, have some wine, make sure everyone gets relaxed and then we’ll say, “Okay, this is what Steve wants you guys to do, here are some options.” And then we’ll measure them out and make the whole party’s clothing. It makes it easier for the groom because he doesn’t have to think about it anymore. It’s all done. Everyone has that one friend like “Joe, please we need you to get there,” and it’s a week before the wedding and he’s like ,“Oh, yea, I haven’t done that yet.” But I will take down all of their names and phone numbers and I’ll coordinate them. I know what it’s like to get married and what it’s like to wrangle everybody together. The groom already has so much going on, so I take it off his plate. 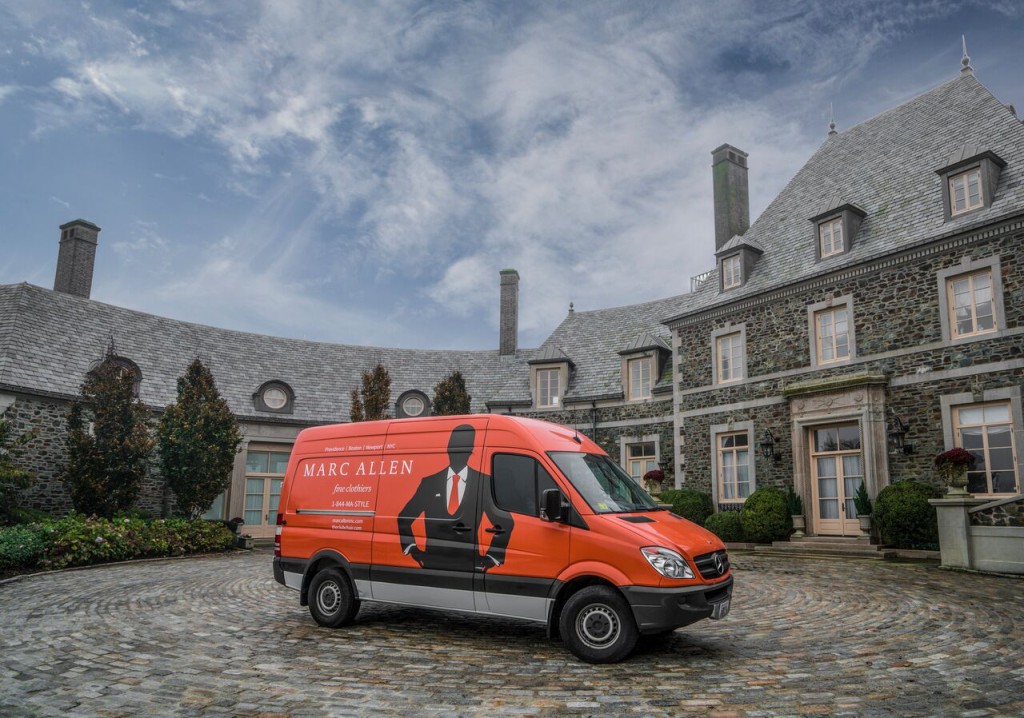 Streisand: There are lots of men who just don’t have time to get over here. So, about a year ago now, I bought a Mercedes Sprinter Van and I wrapped it in a look that goes with our store. Then I completely redid the inside and turned it into a show room complete with work space, a bar, air conditioning, music and all of my fabrics. It’s very Mad Men-esque. And it’s great because I will pull up to a guy’s house, he walks out to the van and we get to work right there.

Guys are busy. By making the process more convenient, it makes the overall process better for them. It’s all about the experience: Was it easy? Did I get what I wanted? Did I have fun doing it? If all those things happen, then they’re clients for life and that’s typically what happens here. Clients will stay forever. 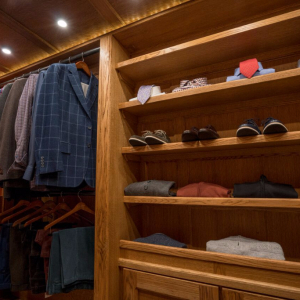 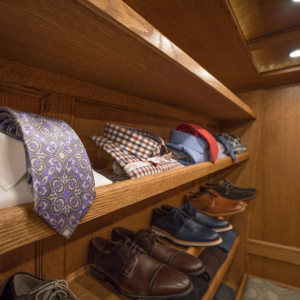 Always wear suspenders with a tuxedo.

“Pants will lay better on a man with suspenders as they keep them smooth and at the right height. With a suit you can get away without wearing them, a belt is fine.”

A man should never wear a clip-on bow tie.

“You should be able to open it up if you want to because that’s a cool look. When the night’s winding down and you loosen it and let it hang there — it’s stylish, sleek.”

The design process usually depends on your build.

“If he’s really, really broad, I’ll probably want to minimize him, I’ll put a wider lapel on there. If he’s a bit narrower on top, I like lapels that give a little more breadth on the top.”

You need a pocket square.

“That’s what that breast pocket is for. It’s an adornment. The look really isn’t complete without one.”

“It doesn’t matter if the suit is fuchsia– if it fits your body really well you’re going to look good and you’re going to feel comfortable. If a guy can own the clothing, he’ll walk taller and surer and he’ll love wearing it. We always say that we give you the fit that you need and the look you want.”

EG Is The Place to Be