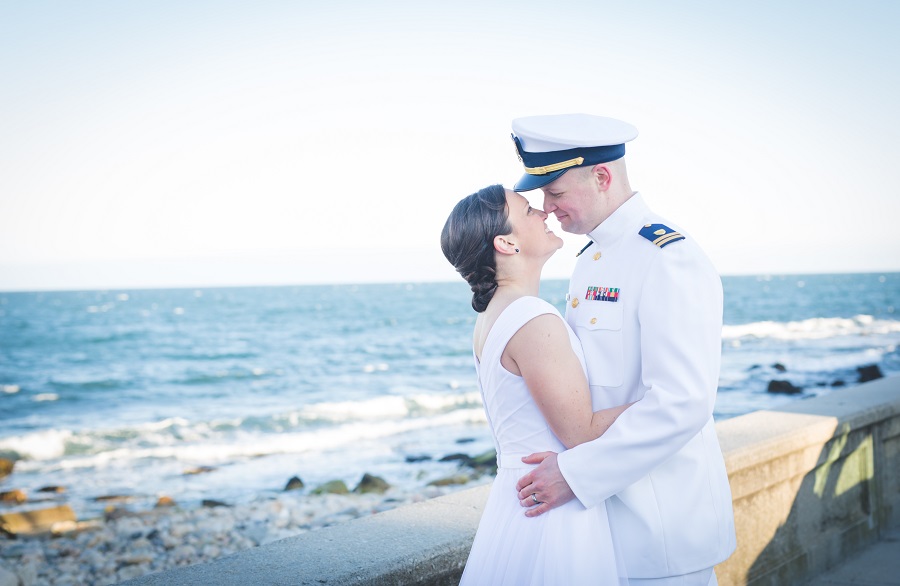 After surviving (although “tolerating” may be a better word) last week’s Nor’easter Stella, most may think that a wedding in March would be a bit… chilly, at best. But that wasn’t the case for these lovebirds; in fact, we’d say it was one of the warmest affairs we’ve ever had the pleasure of sharing.

*Editor’s Note: This is the first in a series of expanded interviews with the couples from our Real Weddings section of Engaged 2017 which we will be posting throughout the year. To see these two and more local couples in print, pick up a copy from your neighborhood convenience store or check out our digital edition!

First things first, are you both from Rhode Island?

Chris: I am. I grew up here and went to Chariho High School.

Chris: I was driving down the side of the road, she was thumbing it … no. I’m kidding. Really, I was a teacher at the Coast Guard Academy down in New London, Connecticut and Ruth got a head coaching job there for the women’s lacrosse team. So we both were there and we just kind of met through coworkers and friends and we hit it off. Well, okay, I asked her out a couple times and she said no, but she eventually said yes. Then I moved cross country here [in Portland] and she stayed there for a year, but we made it work. 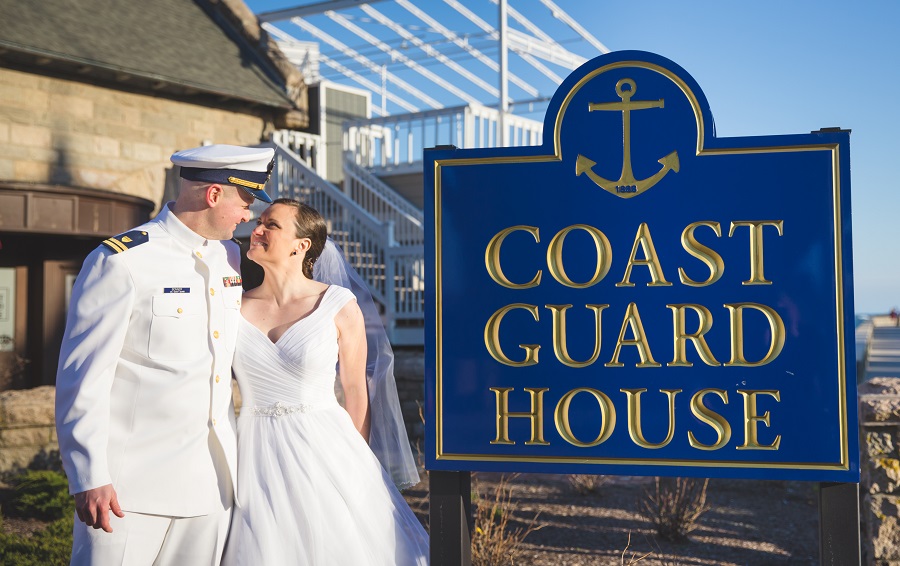 How did you get engaged?

Ruth: We had been talking about getting married, but on the day that it actually happened it was a complete surprise. We got engaged last December and the summer before that is when Chris moved out to Oregon. So he commuted here for Thanksgiving and we actually went and looked at engagement rings. Then I came out to him for Christmas. The day after I flew in we ran some errands and then Chris said he really wanted to check out the waves at a beach in Washington that we had been to before. We were actually standing right where the water was coming up onto the beach when he got down on one knee and proposed, and I just kept saying, “Oh my gosh, oh my gosh!” And he actually said, “Do you mind if I stand up now? My knee is getting wet!” And in that second, literally as he finished saying that sentence, a giant wave knocked into us.

Chris: We got completely soaked.

Kait: But you held onto the ring though right?

Ruth: I was freaking out because my hand is now freezing and I was afraid of it flying off my finger. I hadn’t even had it for a minute! And then he told me later that day that when he flew east for Thanksgiving, he had actually come in a day earlier than I had known about. He’d flown into Manchester, NH to have dinner with my parents and ask for their blessing. Then he drove down to me in Connecticut and we turned around the next day and drove back up to NH to see my family. When my parents saw him they were like, “Hi it’s so good to see you! How was your flight?” I had no idea; he totally pulled it off.

How did you get involved with Sara Desirey?

Ruth: Sara originally worked with Chris’ aunt. When we were looking for a photographer, his aunt suggested Sara. We looked at her stuff and we immediately loved it. And then we really loved the fact that Sara’s husband is a Coast Guardsman as well. We really bonded over that. Plus she’s just an awesome human being.

I feel like I don’t see very many spring weddings — what made you decide to go for a March date?

Chris: It was kind of weird because I had been gone since July 2015 overseas, so we had been apart for five or six months long distance. Ruth’s coaching season starts in January and I’m very busy on the ship, so we were going to actually wait until May. That was our plan all the way until basically the middle of January. We were looking at venues and kind of sticking to a budget and figuring out when I could get off the ship and go away for a little bit which is always a little challenging. Ruth had games during the week which was challenging. We weren’t really liking the venues we were looking at, especially the prices. But then it just kind of lined up that the Towers were available the one free weekend that Ruth had that I had off; that march 26th weekend, and it was 40 percent off the normal price, which was great. So we really didn’t put much thought into the actual date… but the time from when we got engaged to when we got married was almost exactly three months. And that’s with the date change and doing it all long distance. 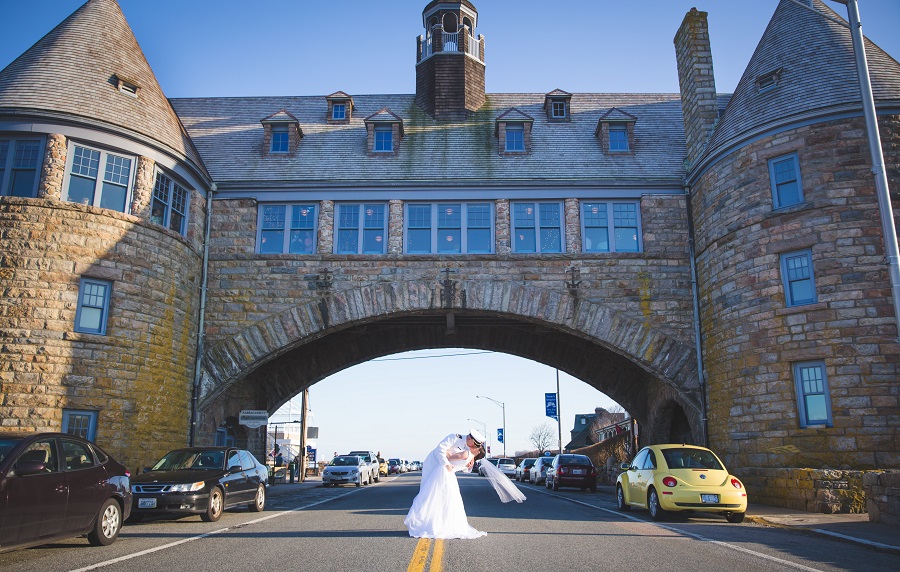 Kait: It must have helped that you only needed one venue.

Ruth: Oh yeah. The wedding part was on the larger, more open side of the arch and it was a really nice setup. There were only about thirty seats so some people had to stand for the actual wedding, but we did a very quick ceremony, maybe ten to fifteen minutes. 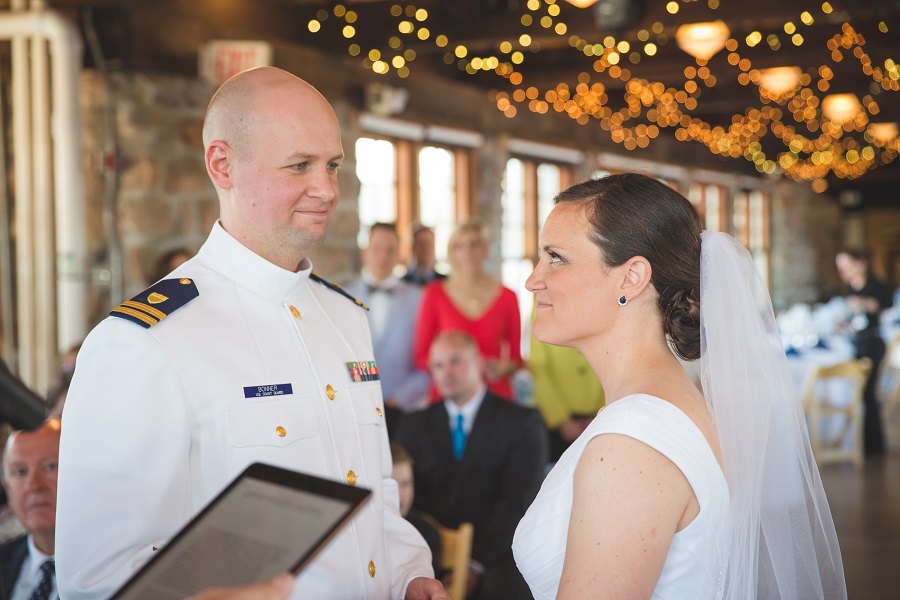 Ruth: The lights were part of the Towers’ setup, and Tom’s Catering provided the linens; we had a bit of a nautical theme so we went with the white and the navy. But really just the decorating on our end was the flowers and my dad did the table numbers. Each table number had a picture of me and a picture of Chris at the same age. So if you’re at table five there were pictures of us at age five. We got the idea from Pinterest, but my dad’s a photographer so he had a great time pulling those together (Bob Ness Images).

I saw that a lot of your family members donated their talents, I’m sure you must have appreciated the help!

Ruth: Definitely! For the flowers, my older sister and I sat down and went through Pinterest and she basically was like, “Yea, I can do that.”  Our flowers were all artificial, so she ordered them and arranged them. And she did our boutonnieres which were rope with a helm on them. She is ridiculously talented. She can look at a photo and say, “Oh yea I can do that, I just need this, this and that.” It was great.

This picture looks like such a nice moment, can you tell me what’s going on here? 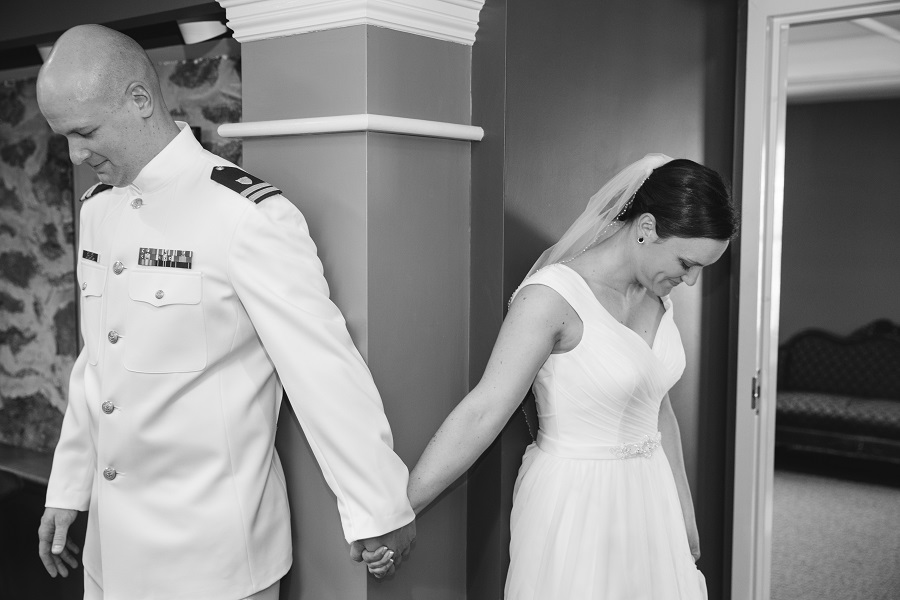 Kait: I’m sure that helped calm any nerves you may have had, too.

Chris: Well, we went ahead with the marriage… so yeah, I’d say so!

What was your first dance song? 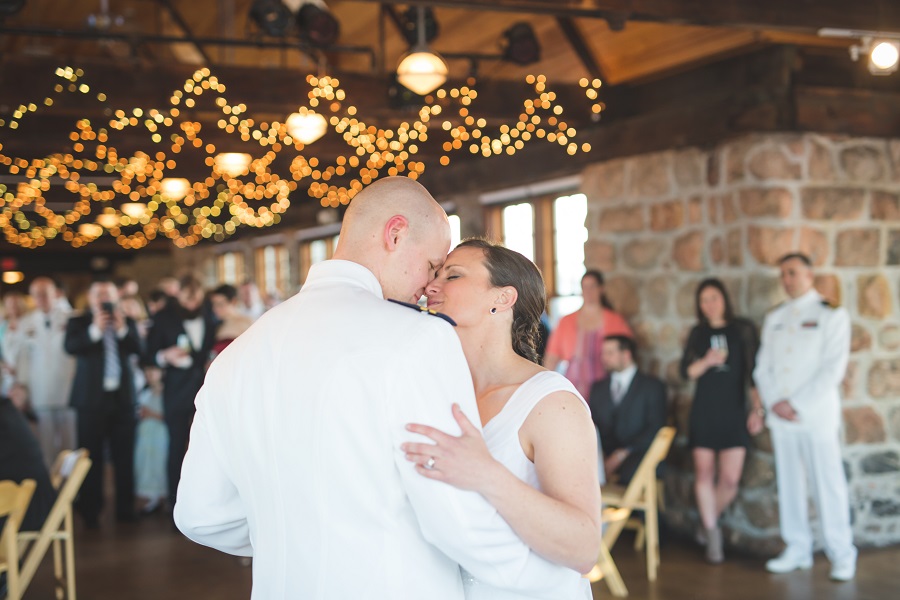 Ruth: “I Can’t Imagine” by Bernard Harris. We liked it!

Chris: It was either that or “Drunk in Love” by Beyoncé. *Laughs*

Tell me more about the awesome sword arch.

Chris: Typically, military men will raise their swords as the bride and groom are leaving the church or leaving for the day, but we didn’t really have that. So we went down and took our pictures outside and then we came back up to the banquet hall and my groomsmen coordinated it. It was kind of just a military tradition that we wanted to partake in. 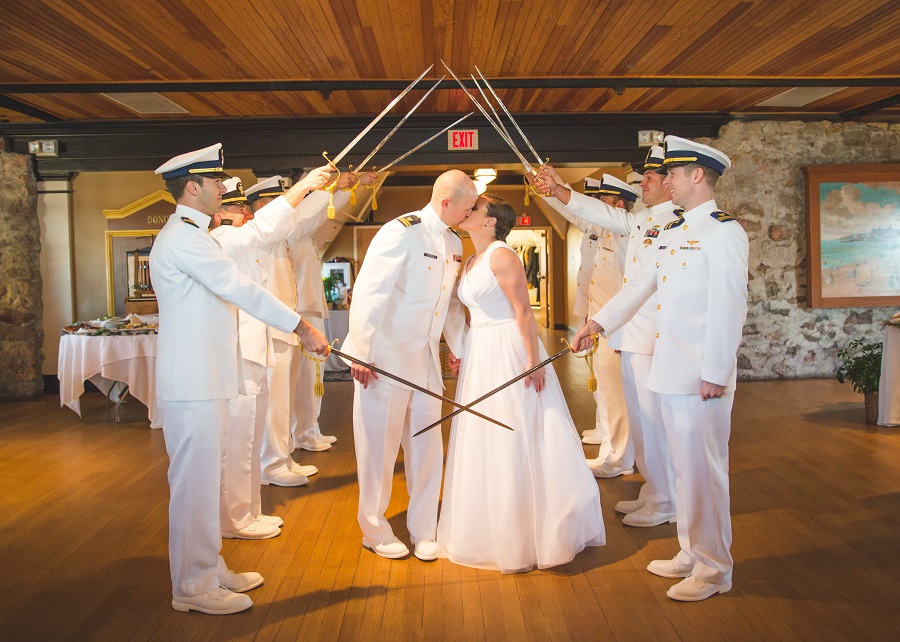 What were your favorite moments from that day?

Chris: For me, it was going to McDonalds afterwards because we didn’t really get to eat during the wedding. But no I really enjoyed dancing with everybody. Most of my friends are from around the country because a lot of them I met in the Coast Guard. So I had one guy from Puerto Rico fly in, one guy from Washington D.C., one guy from California… it can be really tough for them all to take weekends off. So it was just really special to get a lot of friends in one place.

Ruth: Both Chris and I just really enjoyed being able to get out on the dance floor — in fact we’re both really looking forward to being able to just go to a wedding that’s not our own together, so we can dance more.

Chris: We’re a little bit older so most of our friends have already gotten married… we’re waiting for a few stragglers to come in. 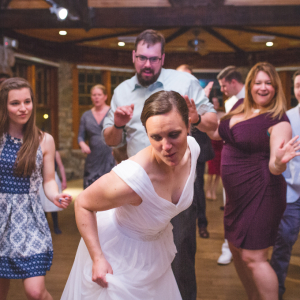 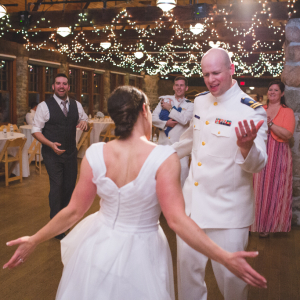 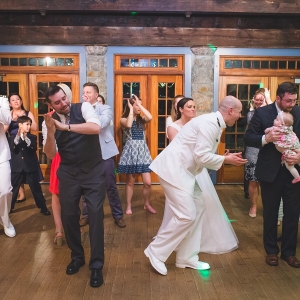 Ruth: But I would say mine was also the fun we had getting to take pictures together. We didn’t do a first look, so the photos taken with just us together were done after the ceremony and after we had taken the traditional family photos. Then we got to go around the Towers with Sara and we just had a lot of fun doing that.

Do you have any advice when it comes to planning?

Chris: I think for us, it was challenging because we were planning it 3,000 miles away. So make sure you communicate well, and cut corners and compromise where you can if you’re on a budget.

Ruth: You asked a lot of, “So who did this and who did that?” and clearly we had a lot of very talented people that stepped up. So I think that being able to have that is awesome, but also I think to a certain extent you need to delegate. With both of my sisters, I just presented a photo of what I liked for hair and makeup and flowers and all that and they ran with it. Trust the people in your lives that you know have expertise and knowledge with these thing. That alleviates a lot of extra stress. I would also say once we had the venue nailed down, everything just fell into place. So just know that everything is really dictated by your venue.

How about some day-of advice?

Chris: The wedding for me was a blur, kind of like snapshots of things, so on the wedding day really think about capturing some of those moments. That probably sounds really corny, but for me it felt like blur. It was a happy, awesome blur, but I have to go back and look at pictures to remember some of it.

Ruth: I would say don’t expect to eat the day of. You will not have time at the reception.

Kait: So maybe schedule a trip to McDonald’s afterwards?

Ruth: Yes, go to McDonald’s when it’s all over.

Chris: They even gave us free apple pies as wedding gifts. That was pretty cool. 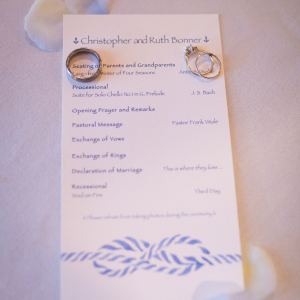 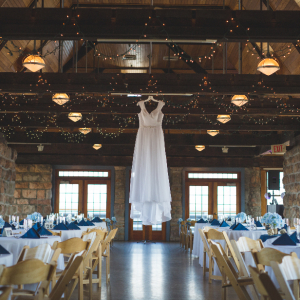 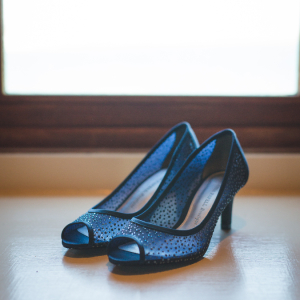 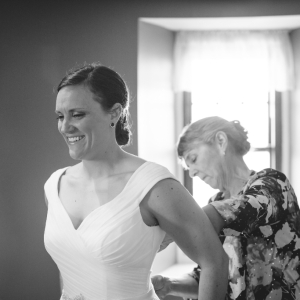 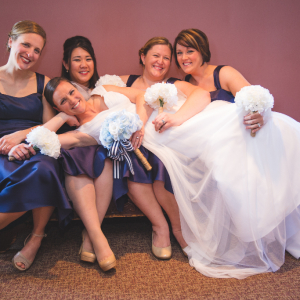 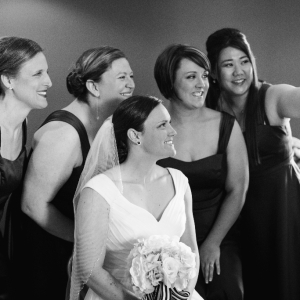 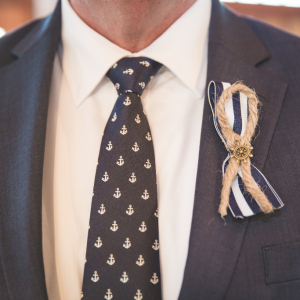 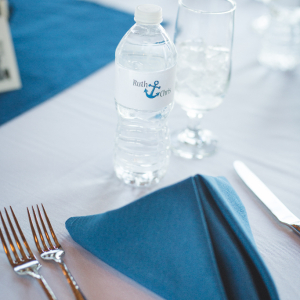 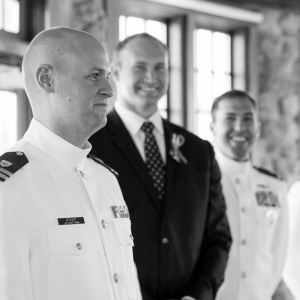 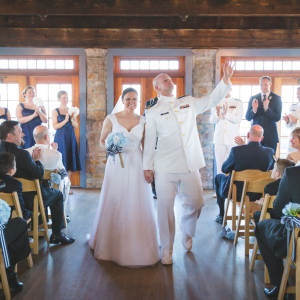 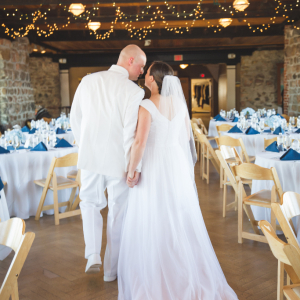 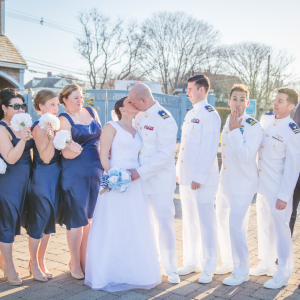 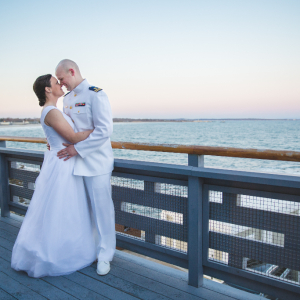 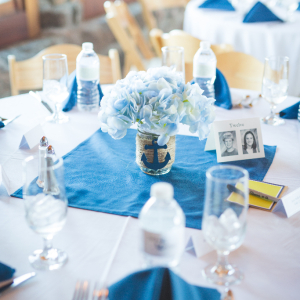 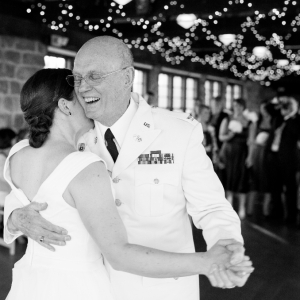 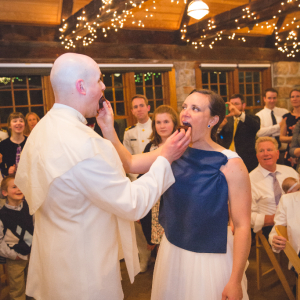 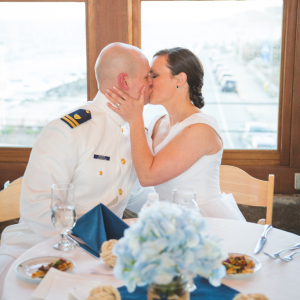 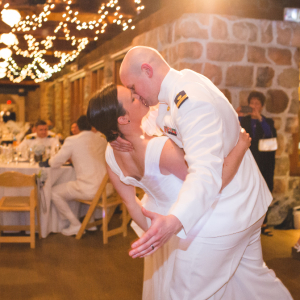 Should You Choreograph Your First Wedding Dance?