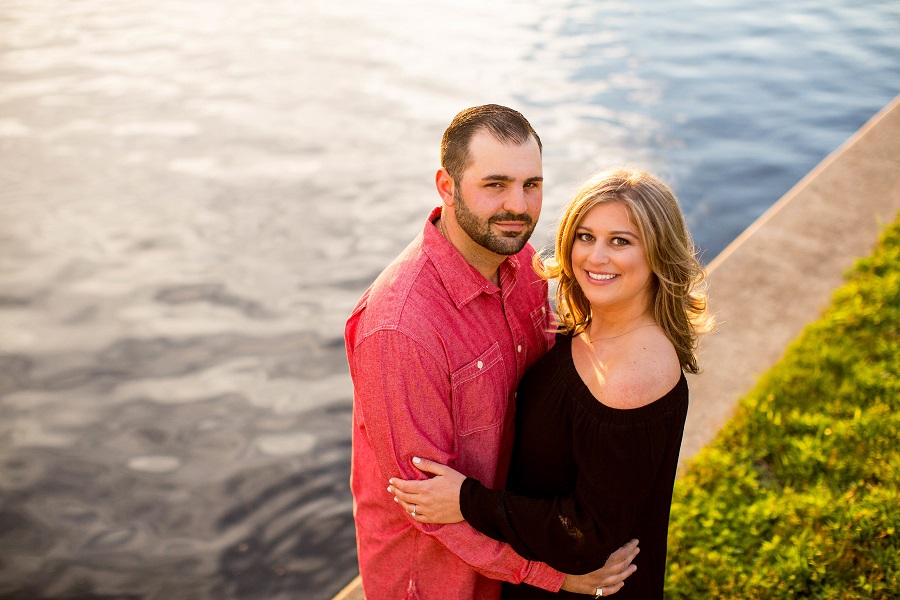 Jenni Olivo and Steven Catanzaro, Jr. of North Providence are set to wed at Skyline at Waterplace in Providence on Saturday, October 14, 2017.

Way back in May 2010, I moved home from Florence, Italy ready to party hearty for the summer before my senior year at RWU. With no desire for a boyfriend or a relationship, I made a very detailed (unattainable) list of characteristics of my “perfect guy”, assuming this “perfect guy” would be impossible to find.

Fast forward to July 10, 2010. I was out with friends at Fish Co. having way too good of a time. We stopped at Firehouse on the way home for some drunk food. While there, my friends begged me to go to Therapy Nightclub (a late night club in Providence) with them for some after hours fun. At first, the answer was “no way.” But then they mentioned that their friend “Steve Cat” would be there (the hot guy that drove us all home from Fish Co. one month prior — he was from North Providence, but I had never seen him before in my life). Once I heard that, I still didn’t reeeeally want to go, but decided to take one for the team and head to the rave (in a sun dress and wedges — not the proper attire for the venue).

Needless to say, as soon as I got to Therapy I knew it was NOT my scene (it was filled with typical rave heads, sweating and dancing all over the place in ripped clothes and dirty sneakers with strobe lights that lit the place up like the 4th of July). Clearly my sheer state of panic could be read right on my face (shocker). Then out of the raging crowd walked “Steve Cat.” THANK GOD, A FAMILIAR FACE! Steven walked right over to me and asked “Why are you standing there all alone, gripping your purse? You look terrified. Come dance with me you’ll be fine.” And BOOM, that was that. We’ve been together ever since.

It was absolutely love at first sight. Trust me, I was NOT the type of girl to trust anyone so easily, especially guys, but there was something about him that felt familiar. We spent hours upon hours dancing and talking and it felt like I had known him my whole entire life. We became “official” on July 14, 2010. In just a few short days I learned that “Steve Cat” was my perfect guy. He checked off every box on my “Perfect Guy Checklist.” It was fate.

Since then we’ve moved four times, traveled to some amazing places, bought a house with a big back yard for our fur-baby Dexter and built the most beautiful life together. Seven years later and it keeps getting better.

‘Twas the day before Thanksgiving 2016 when we drove down to our favorite restaurant, Matunuck Oyster Bar, for dinner before our traditional “Thanksgiving Eve” night out with friends. We drove to the beach around 3 p.m. to “avoid the Thanksgiving traffic in the city.” When we got there, Steven told me it was way too early to eat dinner. He suggested that we make a pit stop at East Matunuck Beach (our favorite beach) so he could check out the “new wind turbines next to Block Island.” So we started walking on the beach, just as the sun was about to set. I was taking non-stop photos of the perfect sunset and he kept walking into my camera’s view. Well, I soon found out that he wasn’t purposely walking in front of my camera. He finally stopped nervously pacing and took out a handwritten love note (which I read with tears in my eyes). As I was reading, he got down on one knee in the sand to pop the question. Without even a breath of hesitation I said YES!!!