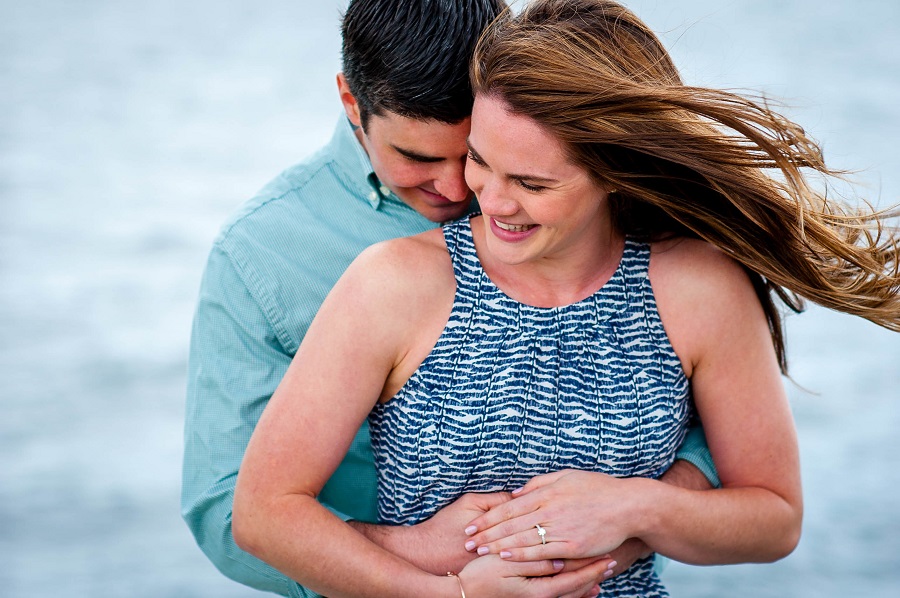 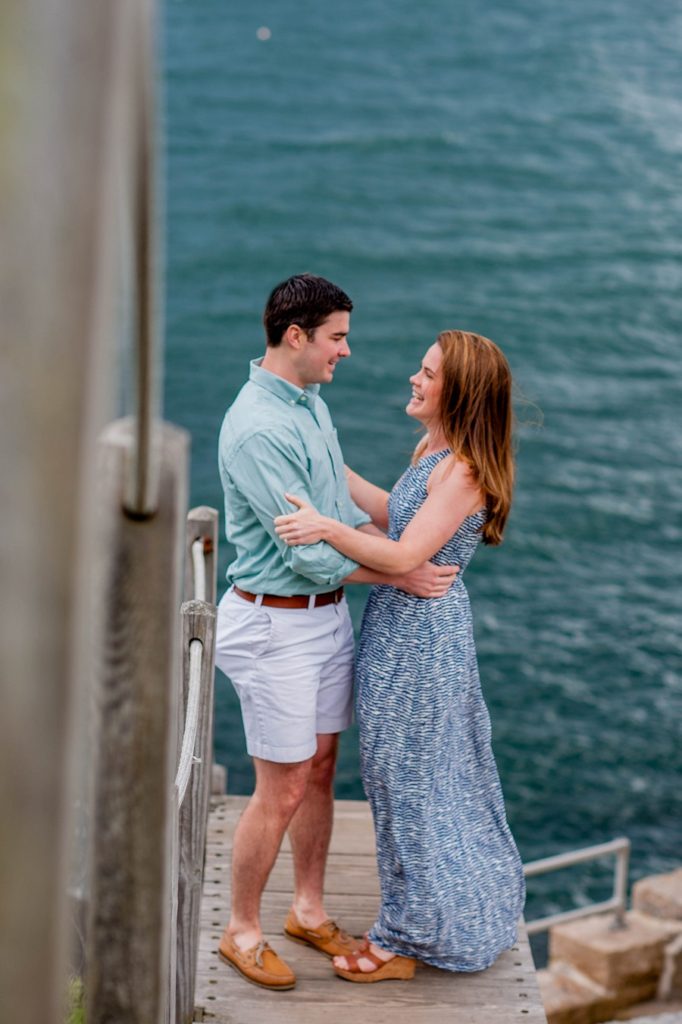 Are you from Rhode Island?

Kate: I went to school in Rhode Island my entire life besides college, so sometimes I feel like I know Rhode Island more than I do Massachusetts, which is where I am from. RI holds a very special place in my heart since I grew up running around the state.

Ben: I was born and raised in Massachusetts, but my parents both grew up in Rhode Island. I played hockey all around the state and went to LaSalle Academy for two years. We really enjoy being down by the water and we can’t get enough of the Rhode Island coast.

Kate:  Yes we both really love the beach, but Rhode Island in general is special to us. My family vacations in Narragansett for two weeks each summer and those two weeks are something we both look forward to every year. 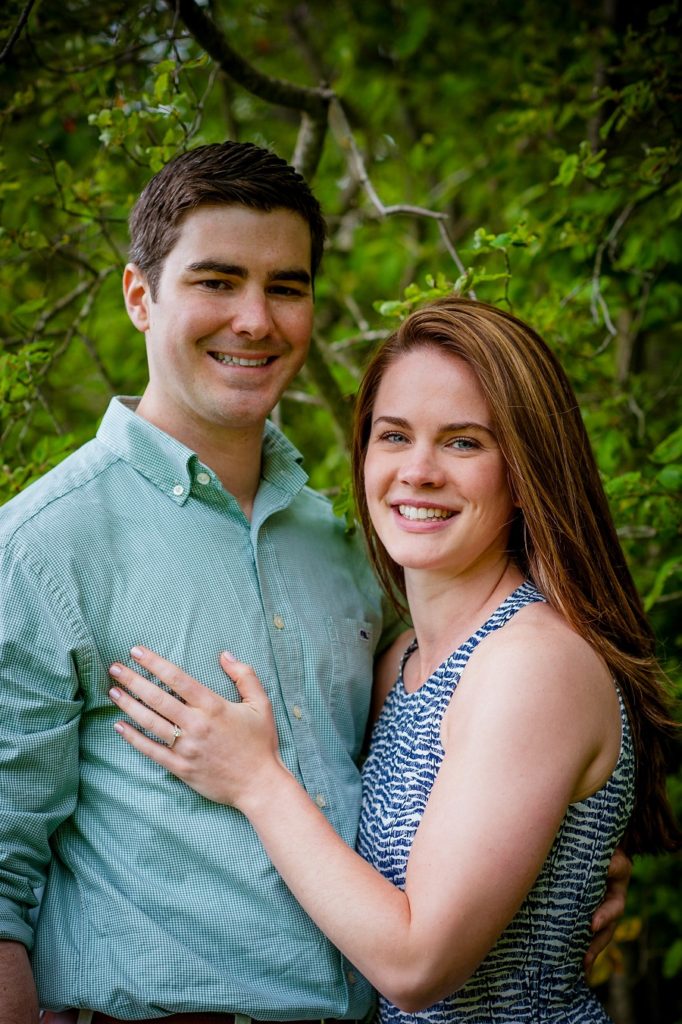 Kate’s POV: We first met our Sophomore year of high school when we attended LaSalle together. Ben transferred out after Sophomore year and we lost touch for more than 5 years. I had made the connection with one of his friends that we both knew Ben, and the friend told me that Ben was coming to visit Quinnipiac University (where I went to college) the following week. So when Ben was visiting we “ran into each other” one night at “Aunchie’s,” a bar all the Seniors always went to. We started talking and then eventually commuting between Quinnipiac and Ben’s school, Villanova. And now here we are!

Ben’s POV: Kate was very pretty in high school and I wasn’t even close to being in her league. We were friendly at LaSalle , but I had a girlfriend at the time and I don’t think I would have had a shot anyways. Fast-forward to 2013 and I decided to go visit one of my good friends at Quinnipiac. He had met Kate a few weeks earlier at the liquor store she worked at and mentioned my name. She remembered me! When I walked into that liquor store, she was still that pretty girl I remembered from high school. We met later that weekend at “Aunchies,” and the rest is history!

Ben, when did you know that you wanted to propose?

Right when we started dating, I knew Kate and I had something special. We kicked off the relationship doing long-distance during our senior year of college; it was a big adjustment for both of us. We both had to live at home for a year after college and then we moved into Boston separately for a year. But once we did move in together, I knew that I wanted to propose. There was one Sunday morning when we first moved in to 157 M that I remember specifically: Kate was sleeping in late and I decided to wake her up… I will never forget her smile right when she woke up to my face. At that moment, I knew she would be my wife one day. 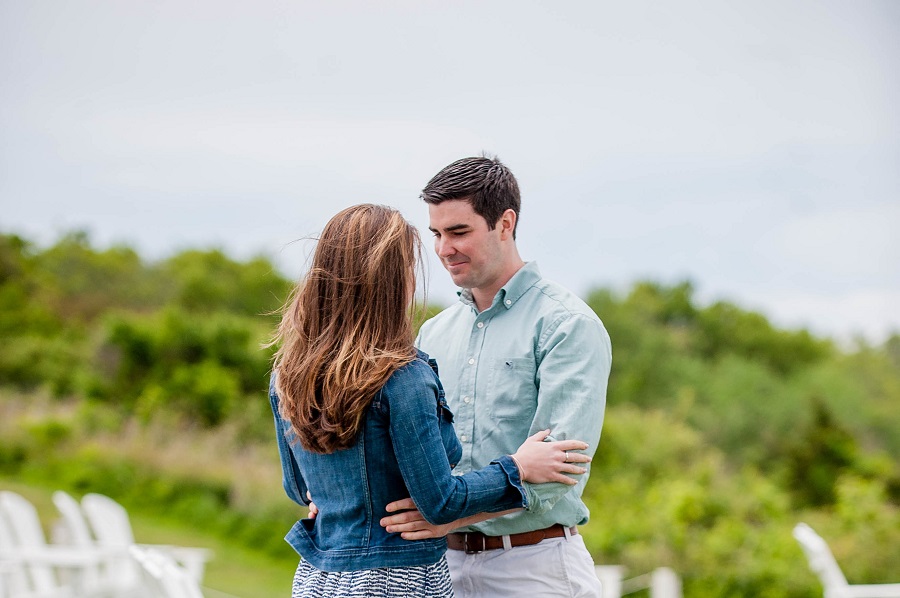 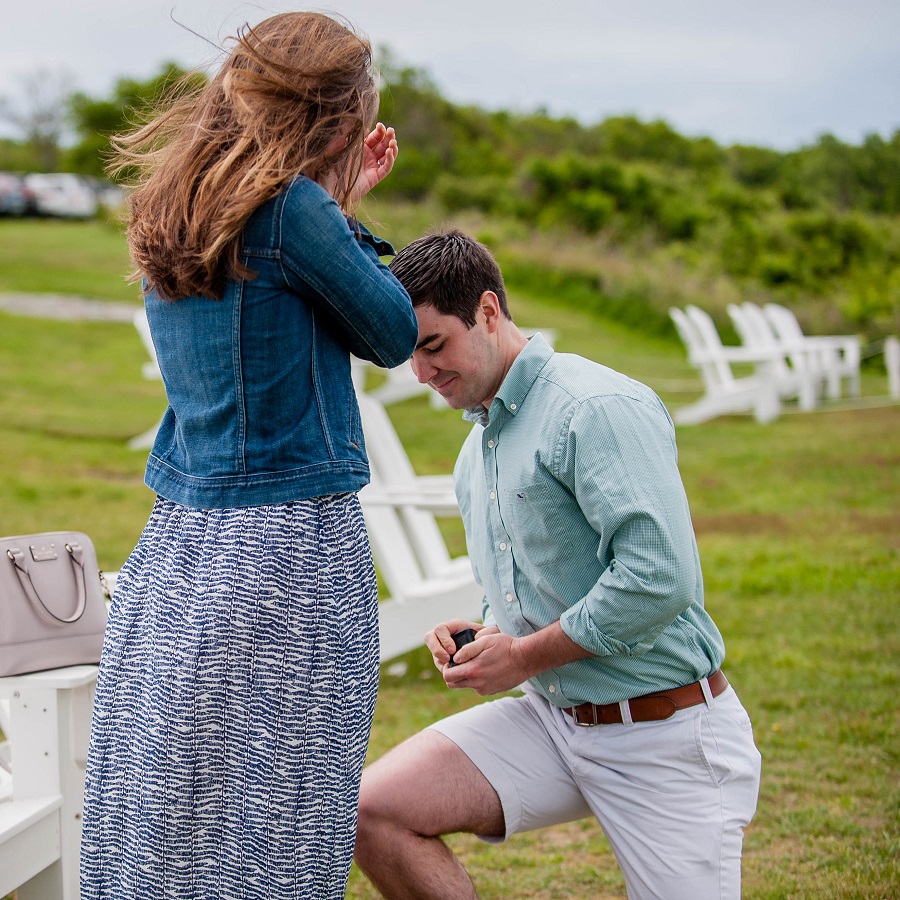 Kate, tell me about the morning of the proposal from your perspective — did you suspect anything was going on?

I was hopeful that it would happen soon just because I was so excited, but I was not expecting it by any means. We had talked about it, like that we both wanted to get engaged but timing wise I had no idea. I honestly thought it was going to be a month or more later than it was. But Ben had both my family and his in on the secret and my mom came up with this elaborate lie that I 100% believed: I thought we were going to Castle Hill for an early Father’s Day lunch because I was going to be away for Father’s Day, and the timing just made sense. 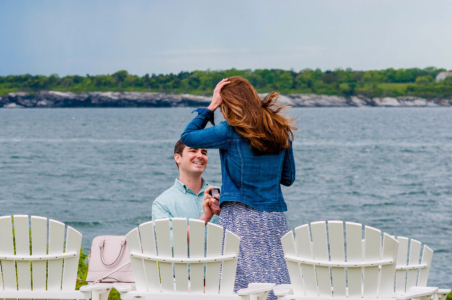 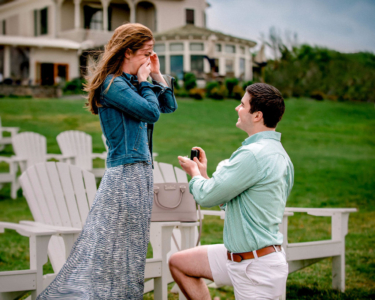 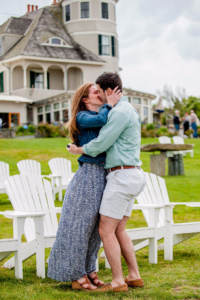 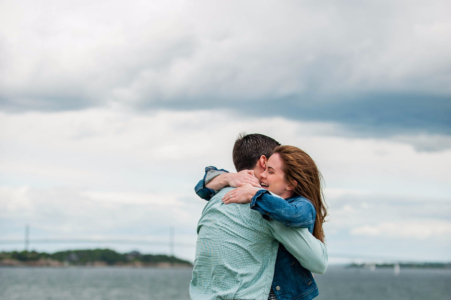 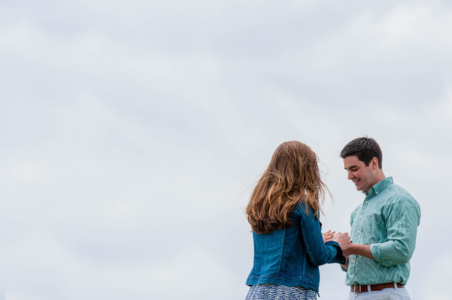 But that morning he was totally normal, which I am still totally impressed with since he is not a very good liar 😊. Later, though, he told me he was freaking out inside. He was so nervous that he actually forgot the ring in the car when we got out at Castle Hill! The only odd comment he made was about the shoes I was wearing — which is not something he would normally think about! Come to find out it was because he knew we would be taking pictures later that day on the rocks. 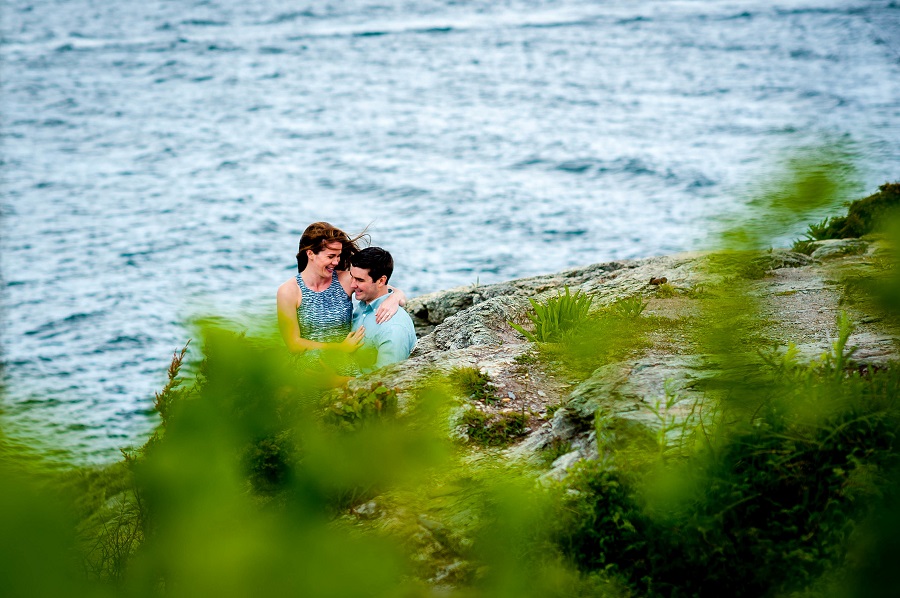 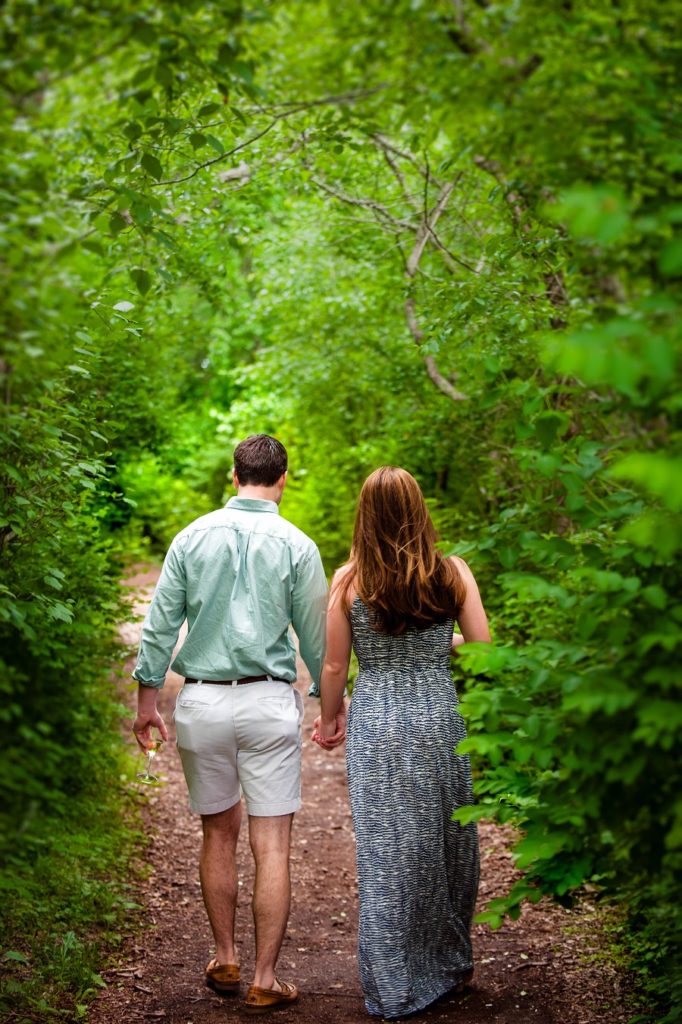 That was really smart to do a full engagement session right after the proposal – Ben, where did you get the idea?

Kate loves watching proposal/wedding videos on Facebook and YouTube, so I knew she would want candid pictures of the proposal and so did I. Meagan’s only available date was that weekend! We talked a few times before the proposal so she knew exactly what I wanted. She was awesome and we are very excited to have her at our wedding!

Who showed up to celebrate with you afterwards?

Kate: Ben had originally told me that after the “Father’s Day lunch” we would stay with his parents in Massachusetts since we had not seen them in a while and we were spending the day with my family. So, after he proposed, he came clean on all the other lies he had told me for the day. My parents and his parents were both coming, which was a surprise, and we were going to have lunch together. We also were not staying at his parents that night but he had booked the most amazing suite I have ever stayed in right at Castle Hill for the night. He had the whole night planned. 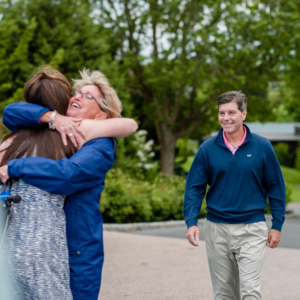 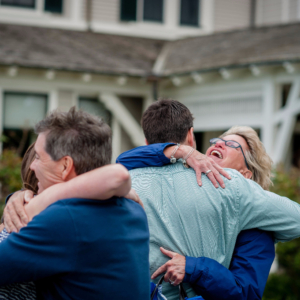 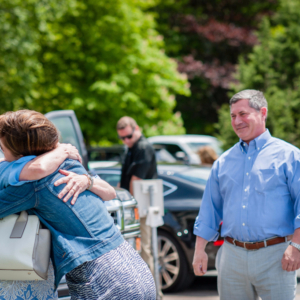 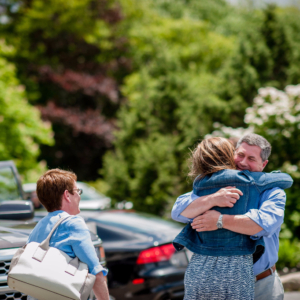 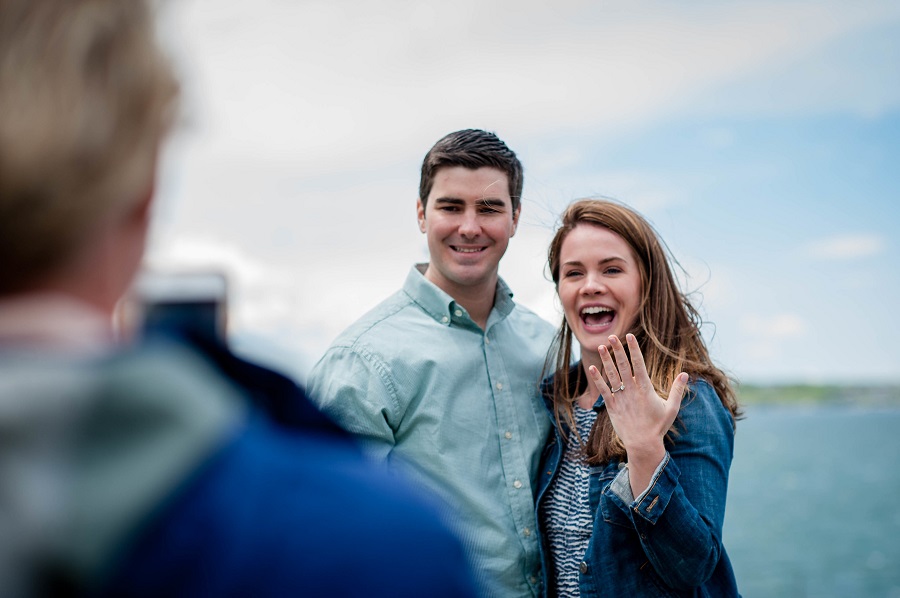 Ben: It was really important to me that both sets of parents were there and it was an awesome lunch. My nightmare was one of them showing up before I proposed – I knew my Mom couldn’t help herself. On the way back from taking the last set of pictures, I saw my Dad’s back and my Mom hiding behind him. They showed up a little early, but they didn’t spoil the surprise. Meagan took some great pictures of us with our parents. 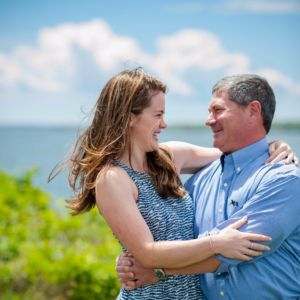 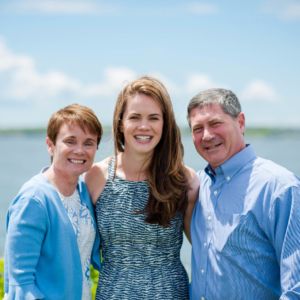 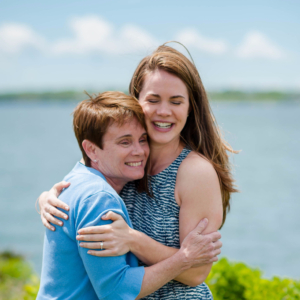 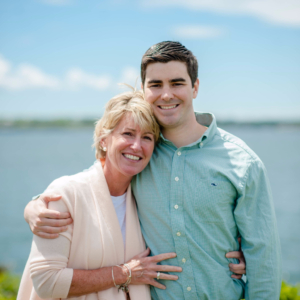 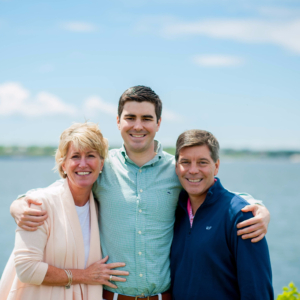 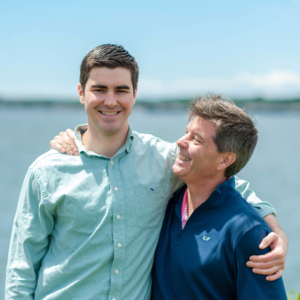 Kate: I was already an emotional wreck but that was the point where I lost it. The entire day was one big surprise, it was just more than I ever could have imagined for such a special day. 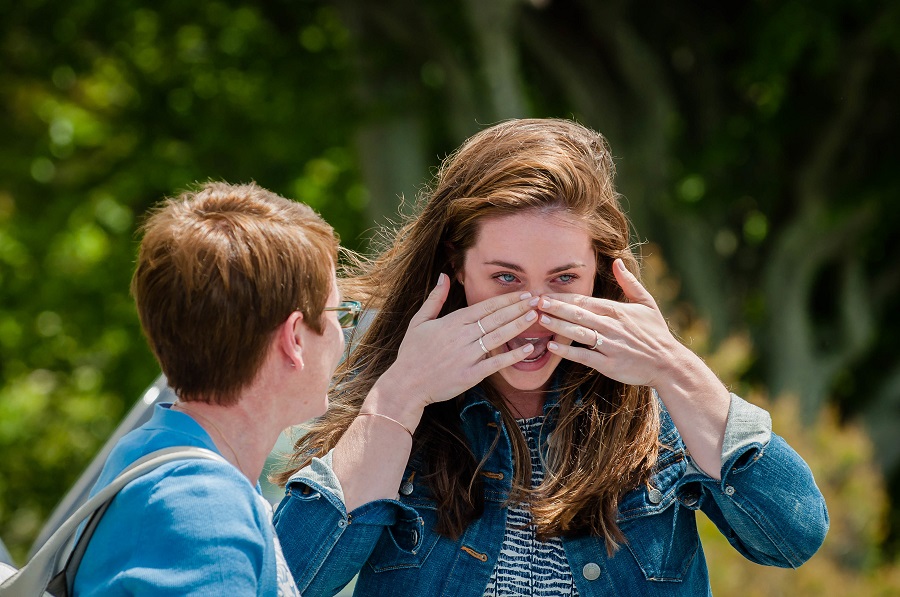 So why Castle Hill Inn? Is it and/or Newport special to you in some way?

Kate: I have no idea how he picked it. I had never been there before but I absolutely love that area. I’m so totally happy that he did!

Ben: We both really enjoy the Rhode Island coast. I really wanted to have a night to ourselves in a nice location when I proposed so I looked around the Newport area and decided on Castle Hill. The Turret Suite was everything I was looking for. We ended the night in the hotel bar watching the Stanley Cup Finals. I will never forget that day. 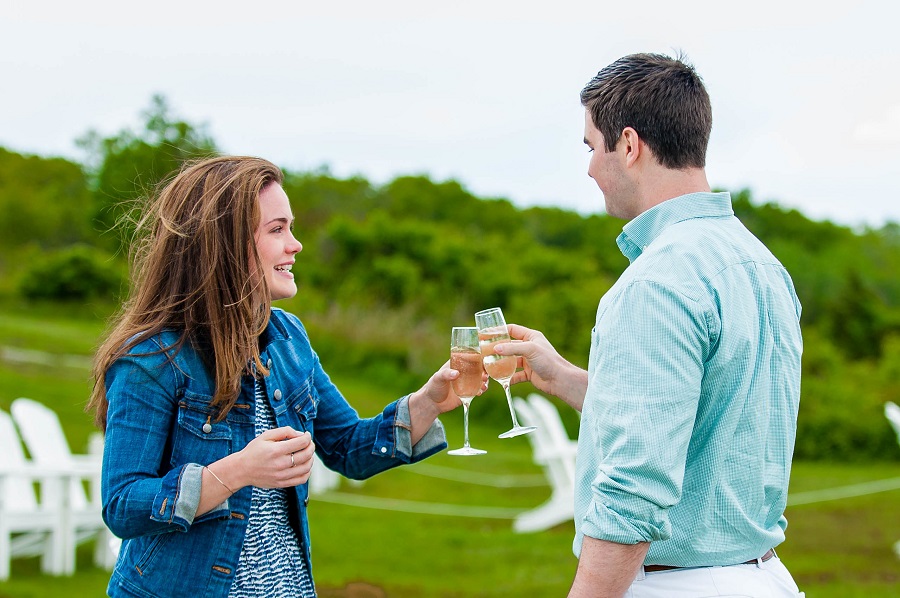 Where is the ring from? Ben, did you design it yourself or did Kate have some input?

The ring is from Tower Square Jewelers in North Attleboro. Kate had showed me a few rings she really liked on Instagram and Pinterest so I took those ideas and ran with them! My Dad also knows the owner well so I felt comfortable during the entire process. 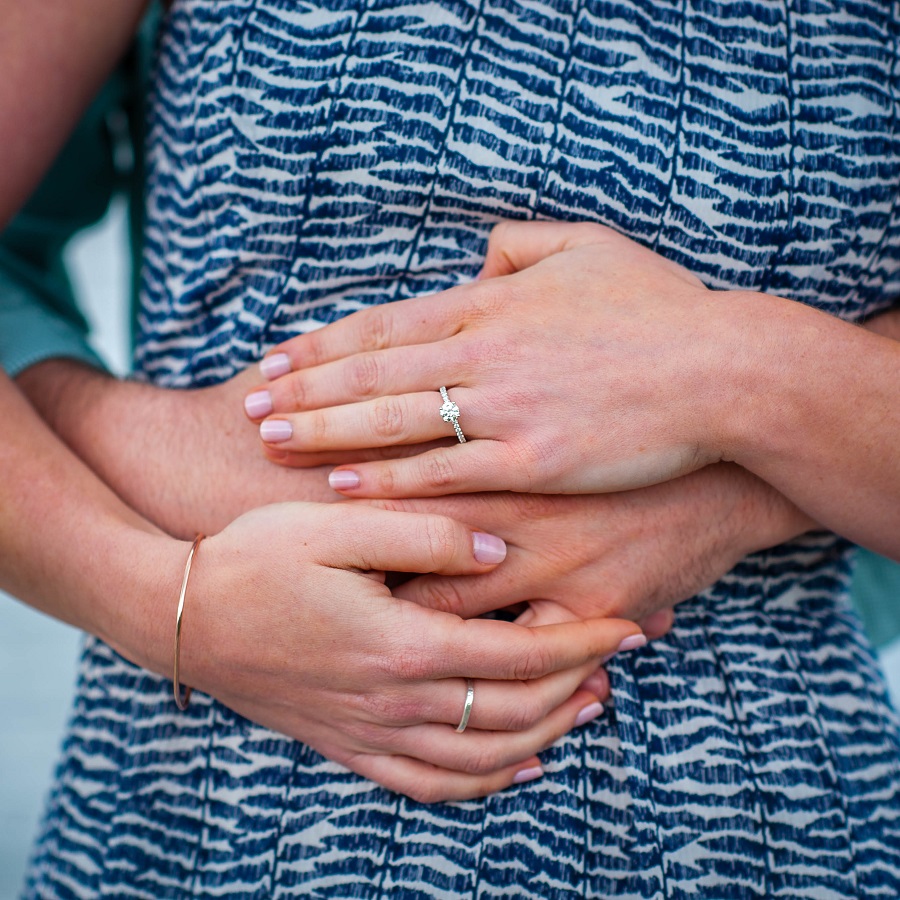 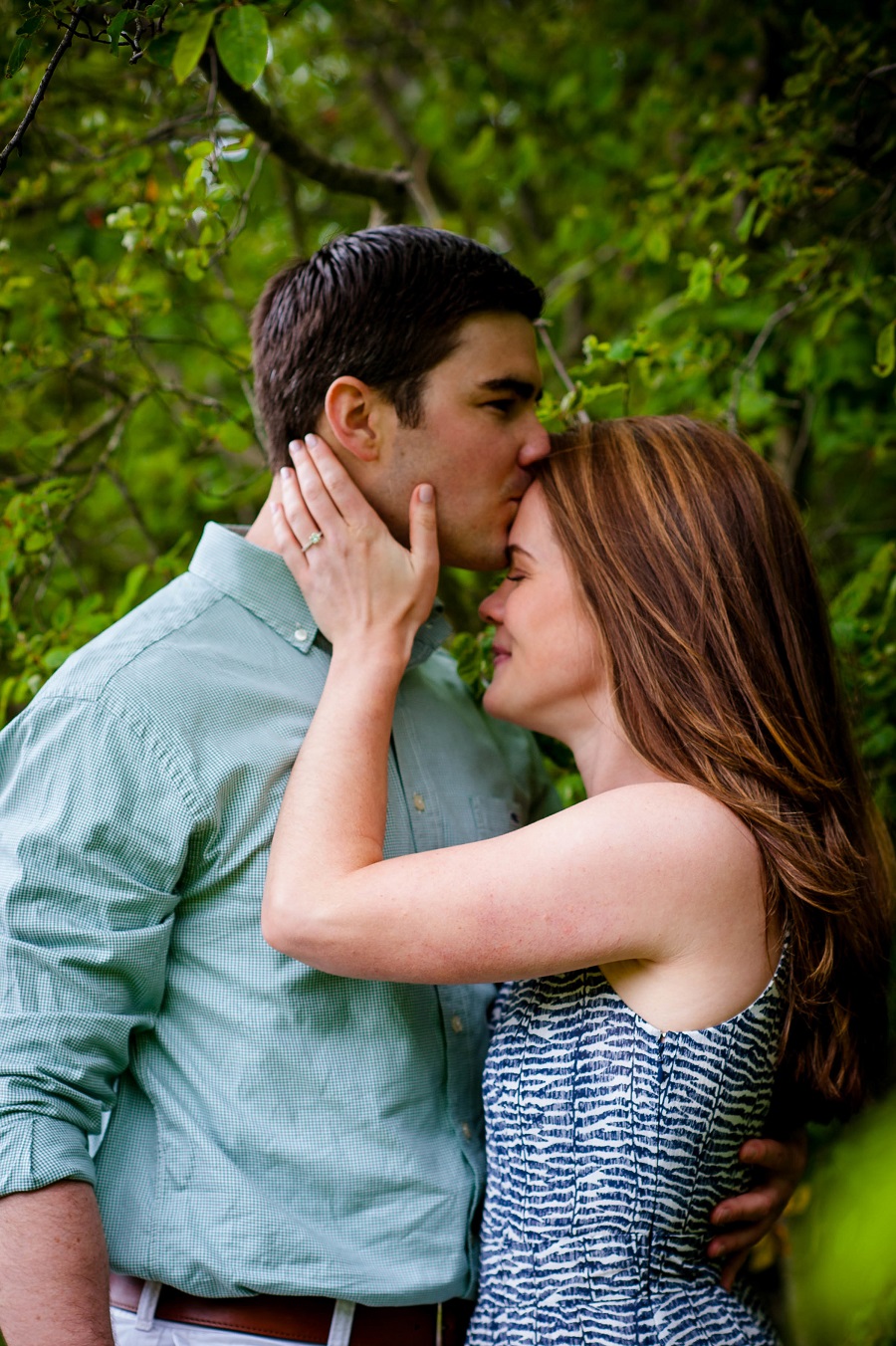 What wedding plans have you made so far?

Kate: Meagan was a no-brainer for our photographer. She and her husband/business partner, Justin, are some of the nicest people ever. They totally put us at ease and the pictures…they are just self-explanatory. Neither of us are the most photogenic of people and they made us feel and look like rock stars.

Ben: Yes, Meagan and Justin are awesome. They were so helpful and made some great suggestions for our proposal.

Kate: As for the rest, luckily we are both planners so we already have a lot figured out. We are getting married next October at the Warwick Country Club. Food and beverage are all right there on site. I have my dress! We have the DJ booked, and florist, cake, and hair and makeup (for Kate 😉) appointments booked. And we have the reverend who will be marrying us on the lawn right on the water. We are getting started on save the dates now.

Ben: Kate and I are definitely planners. As she mentioned, we have a lot planned, but there is definitely more to get done. Kate is really good at staying on task and keeping me focused. I’m really excited for the cake tasting!

Kate: We are going to take a break from planning over the holidays, but once all the vendors are booked then the fun details start so I am really excited for that. And the cake tasting, of course. 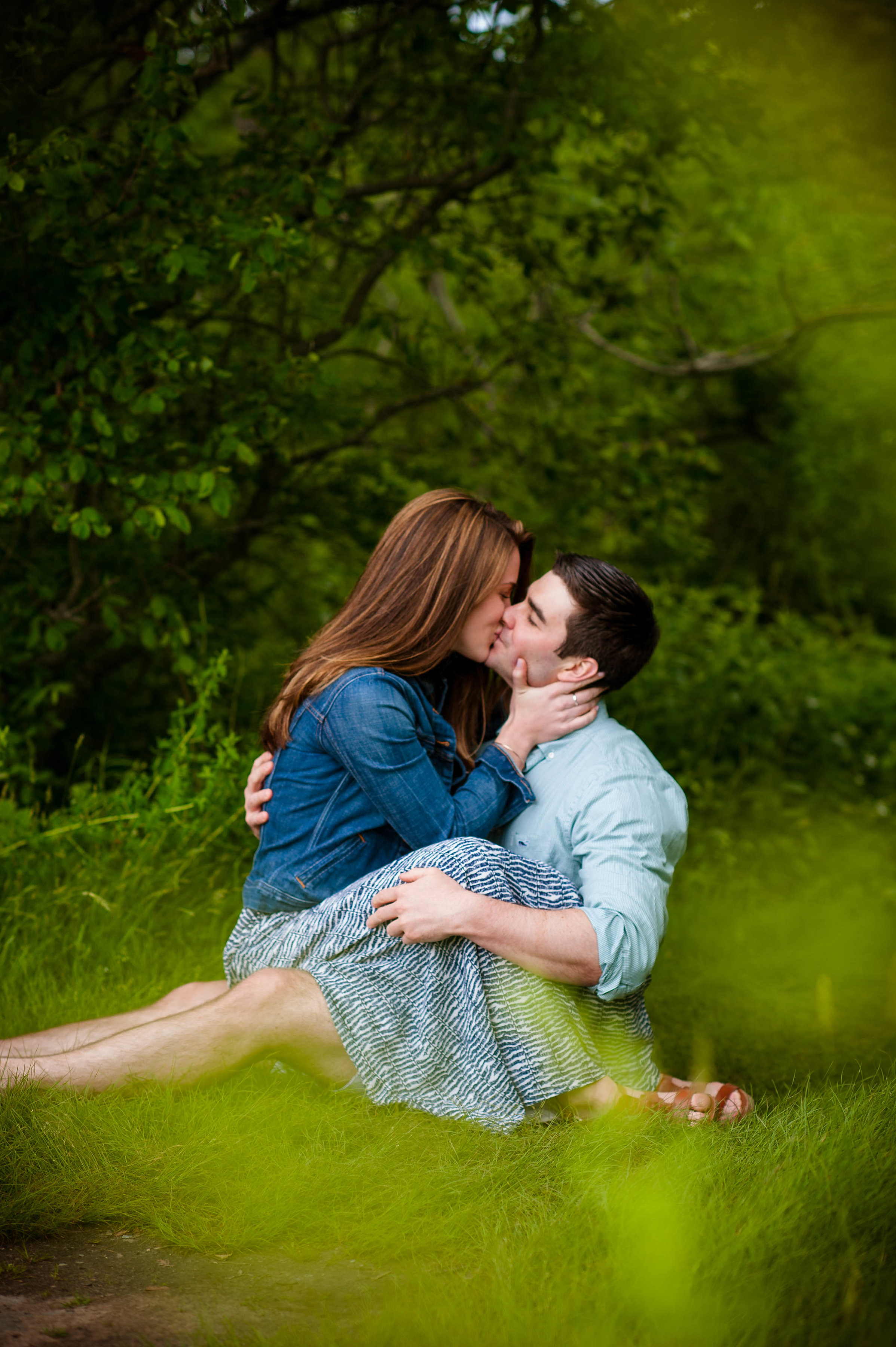 Kate: I am excited to see him for the first time. He looks really good in a suit 😊. I am also just really excited to start our life together. He balances me out and has made me a better person, so I am so excited to start the next chapter with him and see what life has in store!

Another thing is that our families have a lot of history that we didn’t know about until we actually started dating. When I first told my dad “I’m dating Ben Dietz” my dad replied “Dave or Rick’s son?”. So first off I thought how do you know his dad and his uncle, but come to find out they knew each other growing up! My grandmother and his grandfather have known each other since our parents were little. And his mom grew up around some of my dads really good friends from high school. So it turned out to be a really small world, and to me it feels like one of those ‘meant to be’ sort of things. I am really excited to get both our families together and just celebrate. 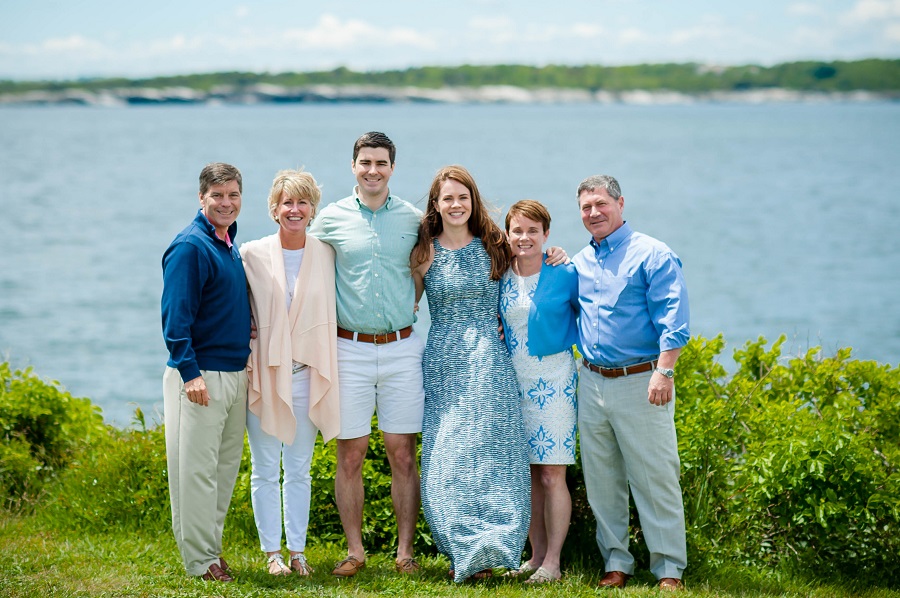 Ben: I’m not sure I am going to be able to handle seeing Kate in a wedding dress. I’m not much of a crier, but I might have something in my eye when I first see her. I think sitting down at our table and seeing all of our friends and family together will be awesome. I’m most excited to be announced as man and wife for the first time. I smile just thinking about it.

In terms of marriage, I’m excited to continue our life together. I love living with Kate and being there for her. She is everything I could have asked for in a girlfriend / fiancé / soon-to-be-wife. I think Kate may be more excited for getting a dog someday. 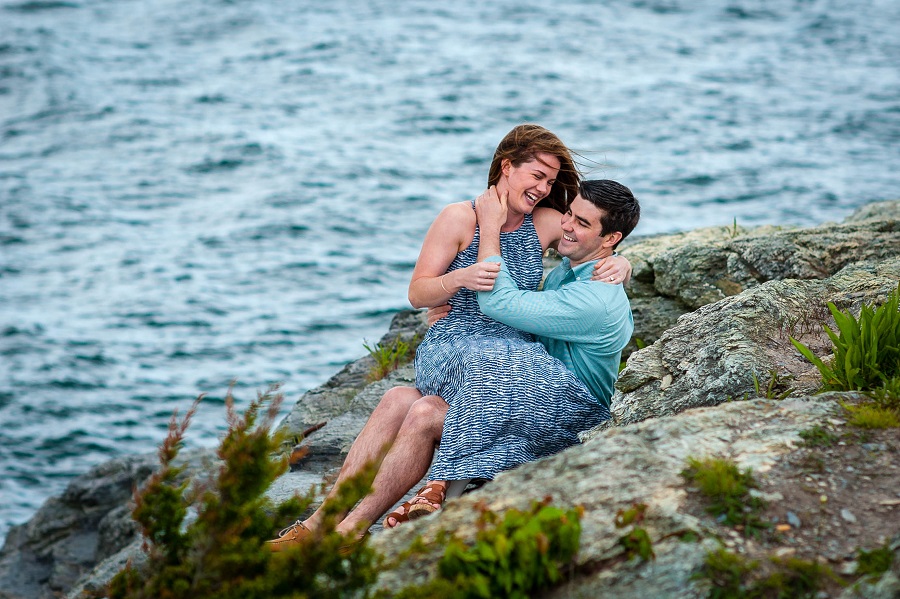