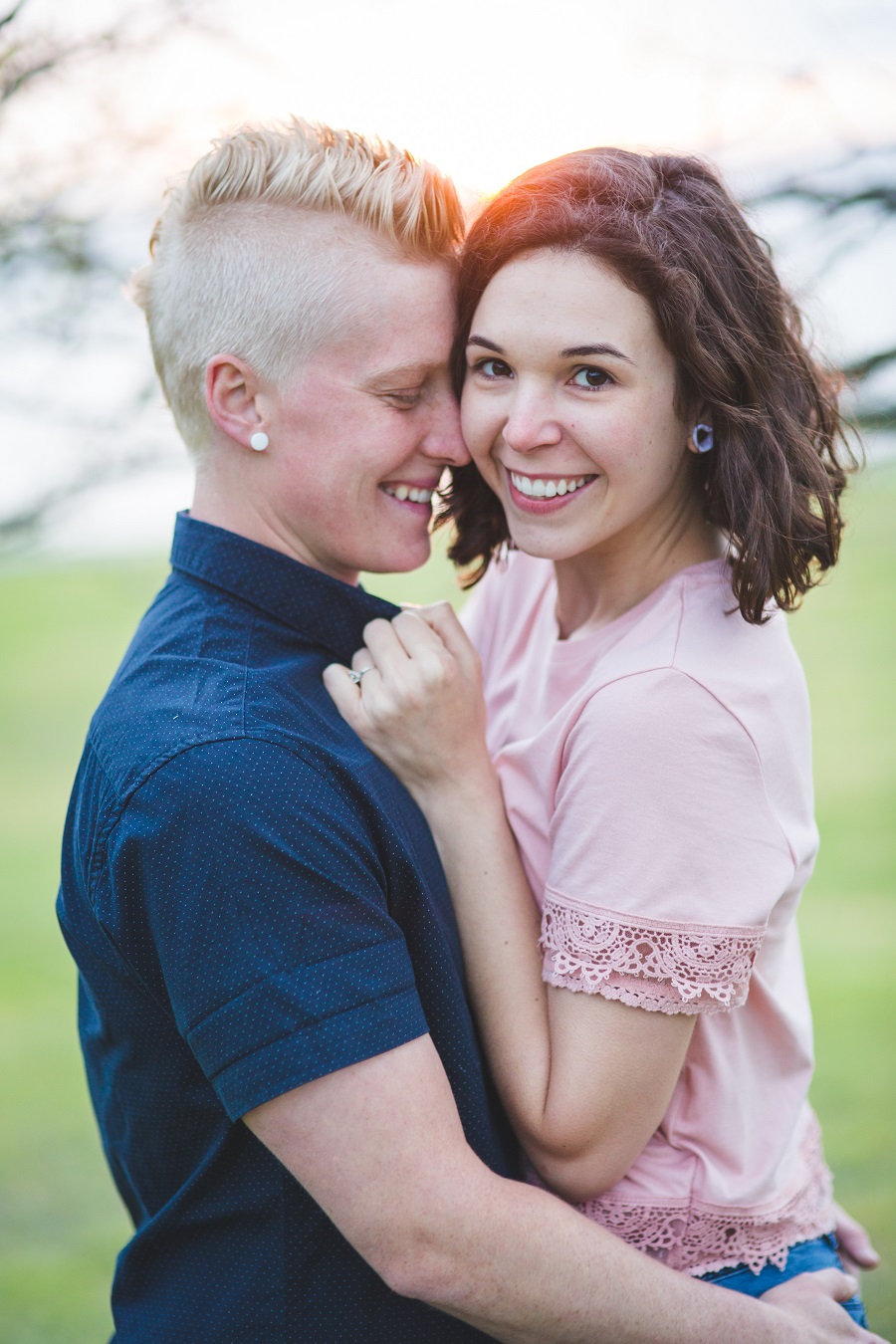 Do these two lovely ladies look familiar? You may recognize Jen and Tara from the “Our Favorite Local Engagements” section of Engaged 2018… And if you adored their story as much as we do, then you’re going to love this extended interview! 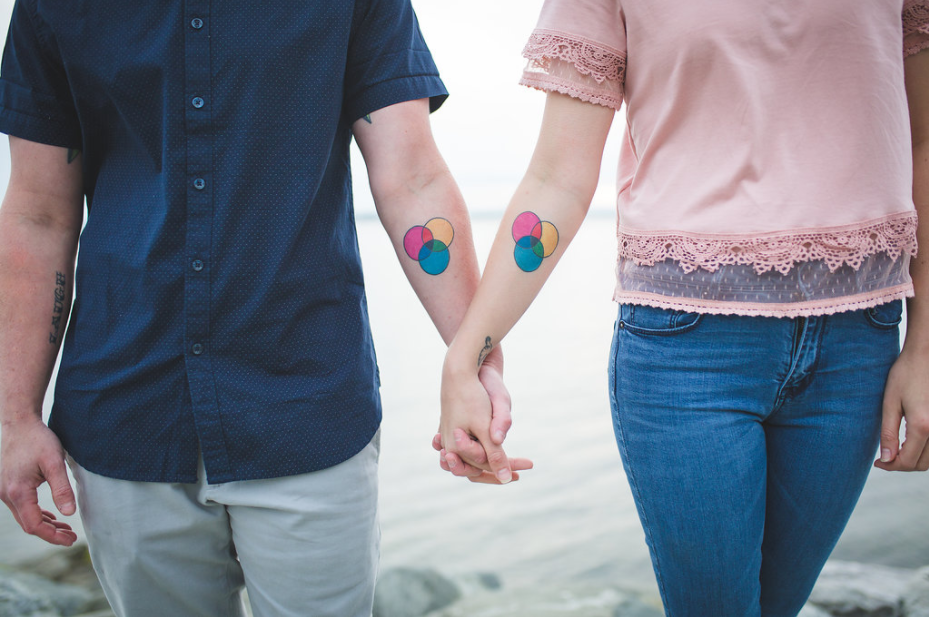 How did you meet?

Jen: Well, technically we’ve known each other since high school. We’re both from Pawtucket but we went to different high schools. We had mutual friends though and we would just always end up in the same places.

Tara: We also played on the same softball team. I was 14 and Jen was 15. She was the best player, obviously, and she even became our coach the next year.

Jen: So yeah, we just knew each other from that.

Tara: Actually, Jen also dated my all-time best friend in high school. Like, senior superlative best friends… Everyone knew we were attached at the hip. So that’s how we ended up hanging out a few times, but we never hung out alone.

Jen: We don’t need to tell people that!

Tara: It’s interesting! Oh, it was just a high school thing. A short relationship, nothing serious. But then you went off to college in New Jersey. 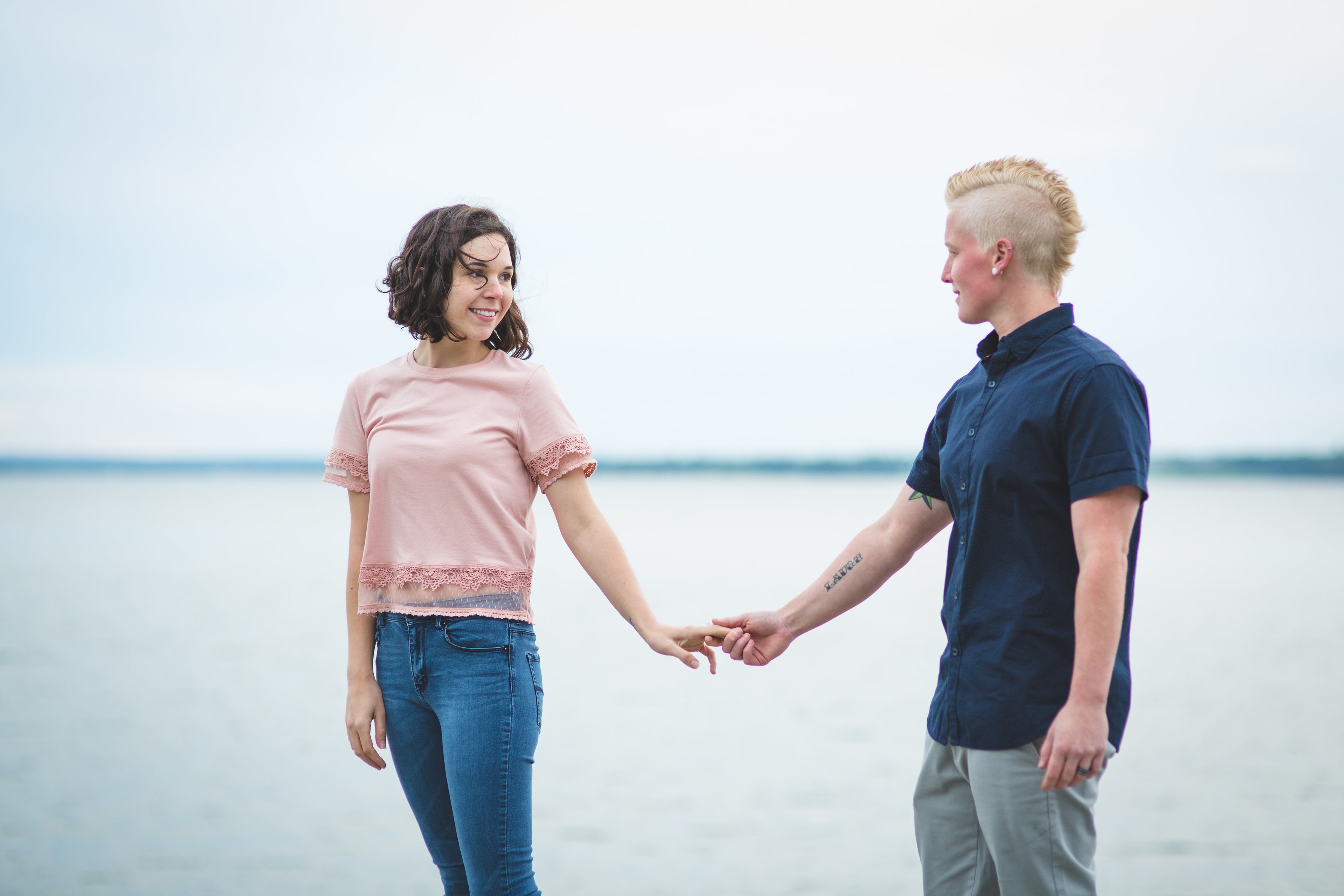 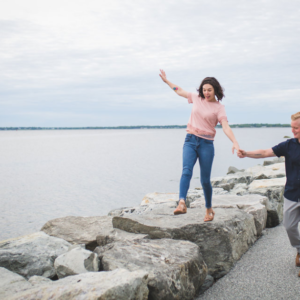 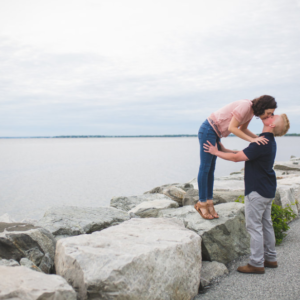 So how did you end up together?

Jen: During the summer I would come back and work for the printing company in Providence that I work for now. One day I happened to be downstairs hanging out with some of my coworkers when I saw this girl walk out and get into her bright red mustang before waving goodbye to my boss. I was like, ‘Wait a second I definitely know her…’ I realized it was Tara but then I second guessed myself so I asked my boss for her name but he didn’t remember.

Tara: A little background: I had gone to New England Tech before I went to RIC and they put my resume into a system and I got a call randomly one day and they asked me to come in for an interview. I knew nothing about the company except that they dealt with manufacturing, but it was an art production job which was what I wanted to do at the time. And then they hired me on the spot! I had been there for two full months when Jen saw me… We worked in the same building but for different companies so we would come in through different entrances every day. But I remember that day waving at Jen’s boss as I was pulling away and then I saw her head popping out from the loading dock. I see her bright yellow hair and she waves and I thought, ‘No way was that Jen.’ And then I saw her Jaguar and I was like, ‘Oh my god it was!’ I immediately texted my friend – the one who Jen had dated — and said, ‘You will not believe who I just saw.’ And then my friend told me I should hang out with her. I don’t know if I ever would have if she hadn’t said that, to be honest.

Jen: So then I messaged her on Facebook and I was like, ‘Was that you?’ and she said, ‘That was you!’ I only had a week before I had to go back to New Jersey for my senior year, but we hung out every night until like 4 a.m. even though we both had work the next day.

Tara: We were actually both dating people at the time, but we ended the relationships right away. So it was a pretty complicated beginning! But then we traveled to see each other a bunch during the school year and then we moved in together and got a devil cat once she graduated. We’ve been together ever since – more than six years! 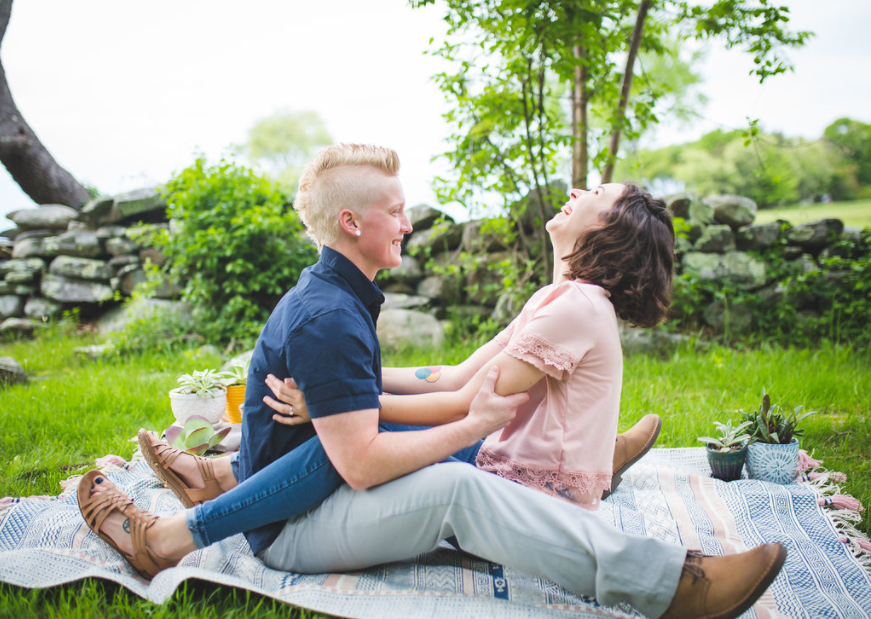 Who proposed to whom? 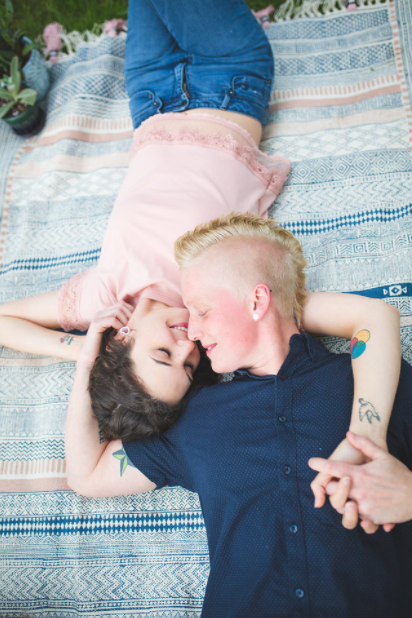 Jen: I proposed to her.

Tara: I knew it was coming all day. I knew when she was buying the ring… We talked about it more than you probably should!

Jen: We were together for five years by then so it was time. I had asked her what kind of ring she wanted because I don’t like to go into those types of things blind. I bought the ring on a Friday and planned to set up this extravagant proposal… But I literally couldn’t wait that long.

Tara: I kept asking her if it was coming all weekend long. I remember we were walking to the car at one point and she was slowing down and smiling at me and I was like, “Eh, eh?’ But we got in the car and it didn’t happen.

Jen: By Sunday I had to ask her because I couldn’t hold onto the ring anymore. I was freaking out. It was very nerve wracking! It’s very hard to surprise her. Like I knew if I got in my car and said, ‘Oh we’re going somewhere…’

Tara: I would know.

Jen: Exactly. So we didn’t really do anything special. We had a lazy day in and then we cooked dinner together that night. But then later we were getting ready for bed…

Tara: It was the last time of day that I was going to leave the room and come back so I just knew. I left and was like, ‘Oh my God, it’s gonna happen.’

Jen: So then she walks in and I close the door… And she immediately starts crying.

Kait: It’s sweet that you were still so emotional even though you knew it was coming.

Tara: We were both super emotional. Oh my God, the wedding pictures with us walking down the aisle and crying are gonna be so ugly.

Jen: And then I, you know, said everything that you need to say and got down on one knee and asked her to marry me.

Kait: [To Tara] And then obviously you said no.

Jen: The funny thing is, she just kept crying. I was like, ‘Can you stop crying for one second and just say yes, please? I need to know before I can get off my knee!’ But she finally said it.

Tara: Right in our bedroom which was cool because that house has belonged to my dad’s side of the family since he was a kid. That bedroom was my aunt’s for twenty years, then it was mine when I turned 18, then it eventually became mine and Jen’s and now my brother just bought it off the family so that house will always be there. It’s kind of cool to think about it that way. 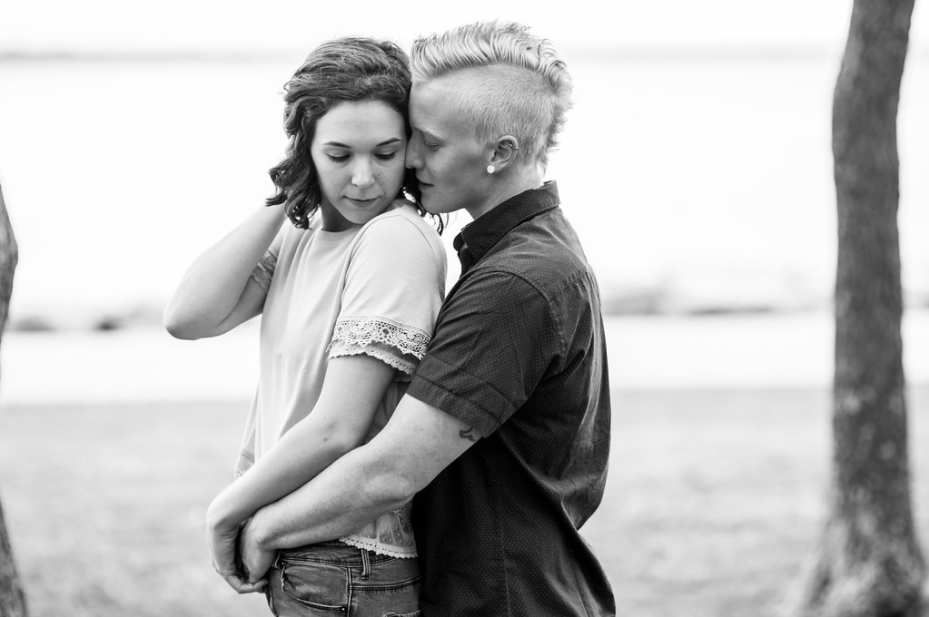 What made you want to do an engagement session?

Jen: Actually, we went into the meeting with Sara [Drew] thinking we weren’t going to do an engagement session originally. We were just going to talk about the wedding day photos. But then we thought about it more and we said, “You know, getting engaged is one of the big things of getting married. You still want a memory of that.”

Tara: I like to pretend that I don’t like being in front of the camera… But we soak it up a little bit. We were so happy with the photos. 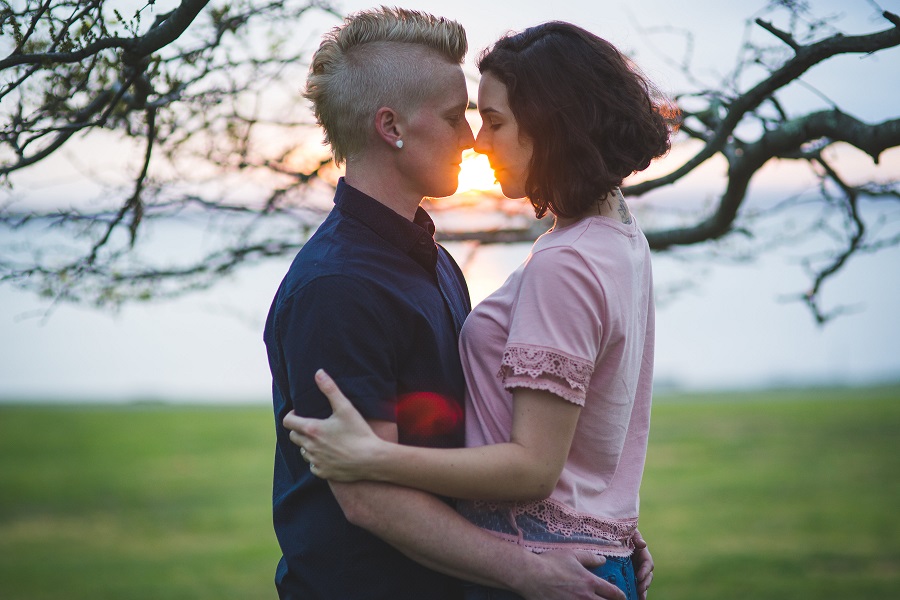 Jen: And then we figured that you can really get a lot out of them. So we used ours for our Save the Dates, and we’re probably going to have one blown up and put on display at our wedding. Plus then they’re also like a whole other set of nice, formal photos. With wedding photos you’re only in what you’re wearing at the wedding, but with these it showcases our style — it’s a snapshot of everyday life,

Tara: And for me, I like to have it as a point in history. Like before we were married and before we had kids; something to always look back on and have. Eventually I want to put together a little mini album. 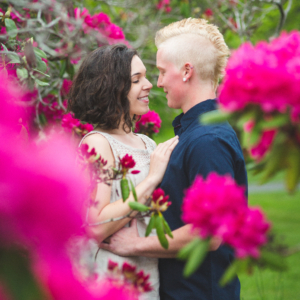 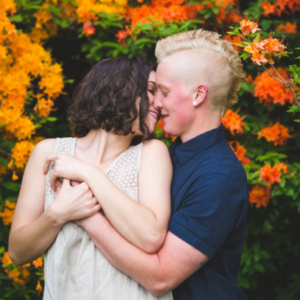 What wedding plans have you sorted out so far?

Tara: Five Bridge was the first place we looked at and we were just like, ‘That’s it!’ We saw it in the wintertime too. So we hadn’t even gotten the full affect before deciding on it.

Jen: Its totally us, too. We love the whole outdoor aesthetic. And then we booked Sara, obviously, and we’re going with Ralph Catering in Cranston. There isn’t really a theme — but Tara’s obsessed with succulents. Obsessed. So that’s going to factor in. 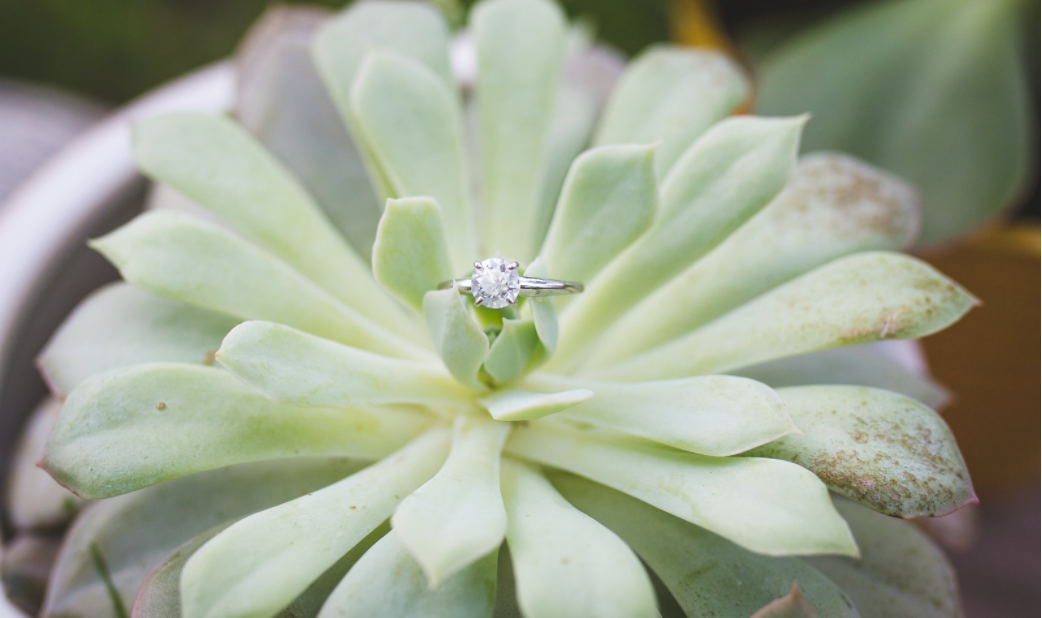 Tara: It started when we got engaged and I started planning everything. As soon as I saw the idea of incorporating succulents on Pinterest I started buying plants and propagating them and I just became obsessed. I always try to be the opposite of anything cliché, especially being a photographer, but I just love them. We’re going to try to do a lot of stuff ourselves, like make a flower crown out of succulents and use them for favors and centerpieces. I’m getting a dress made for me which is totally not what I expected to do at all but it’s a lot cheaper! And I’ve gotten to make all of the decisions and choose all the materials, the length and the style. Then my bridesmaids will wear sage green and light steel blue.

Jen: I’m going to have a navy blue jacket and a gray suit. Everybody else will be gray. My brother is my best man, and then I have two girls – one in a dress and one in a suit. It can be hard to coordinate when you have a mixed party like that….

Tara: Our wedding going to be traditional in like the way that we do the standard walk down the aisle and the first dances with our parents, but some parts will be ‘weird.’

Tara: Like the ceremony is probably going to be literally five minutes.

Jen: We’ll do our own vows though.

Tara: I’ve been thinking about vows and sentences and words that I’d want to say for the past five years.

Jen: I actually think I have some written down in my phone.

Jen: Yeah I do. [She pulls out her phone and scrolls through] It looks like I started them in January 2017… So right after we got engaged in November. 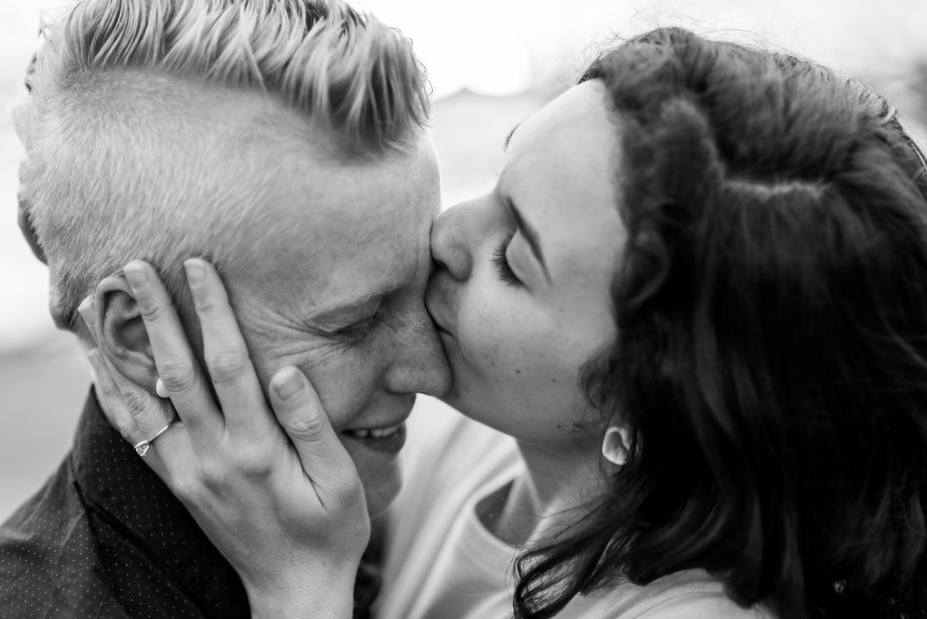