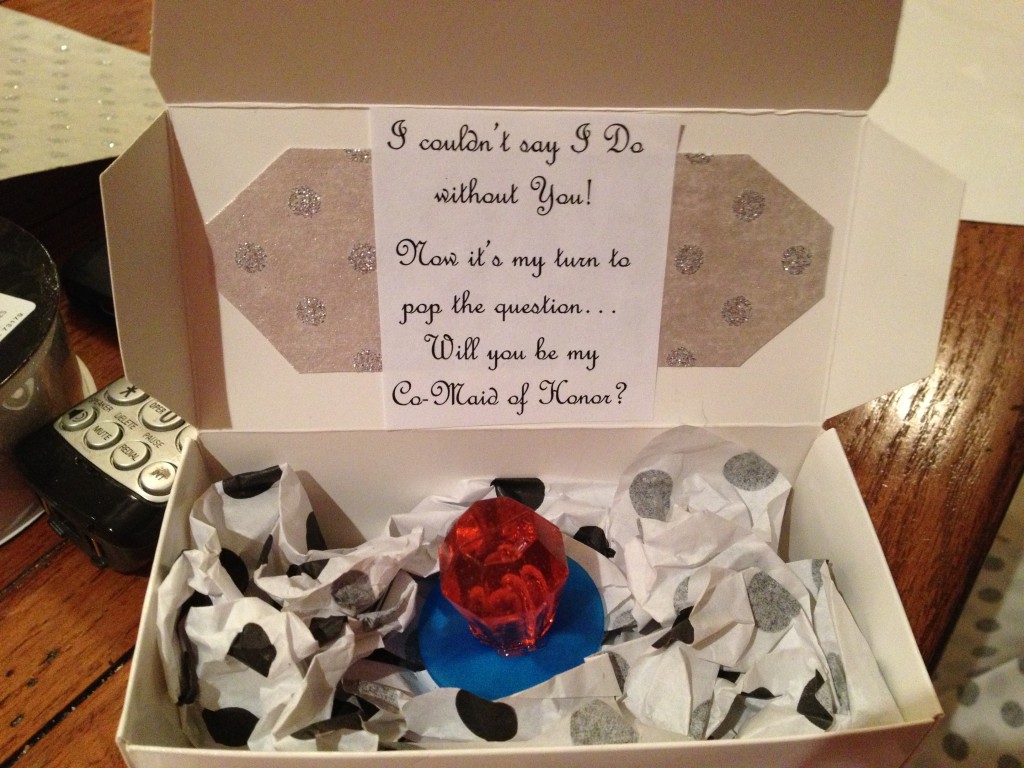 I got the guy and the ring — now what? I need my girls!

A week after Adam proposed we had a trip planned to Saratoga for the horse races with some family and friends. One of my best friends, Lauren (she’s the one mentioned in the first blog that totally put the squash on Adam and I a few years back — it’s okay though, we forgive her) and her family were also coming and I wanted to ask her to be my co-maid of honor with everyone there. However, I’m terrible at secrets and wanted to ask her right away. After much Pinterest searching and a touch of my own creativity, I finally decided on how I would ask. I wanted something fun and cute rather than just saying, “Hey, want to be in my wedding?”

So off to the arts and crafts department I went. Fun paper, pink ring pops, ribbon, and a box — everything I needed. I’m no craft person, but it’s the thought that counts, right?

My mom and I put the boxes together and off I ran to Lauren’s house to ask her (she’s my neighbor). I told her that I had a little something for her since she helped Adam plan the proposal (she’s much better at keeping secrets than I am). She opened the box and tears immediately started flowing from her, my mom, her mom and me (she said yes, of course!).

Up next was Kelly, literally my friend since birth. I took her out to dinner with our moms. She opened the box and said yes as well. So I had my co-maids of honor…four more to go.

Being an only child (Adam too) it wasn’t like we had a sibling to automatically turn to when looking for a maid of honor or best man. We both had two extremely close friends and would never pick between them. Therefore, we decided to have both — there’s no rule saying you can only have one!

Hailee and Ainsley, my twin three-year-old cousins, will be the flower girls. I wanted something fun for them, so I found this great website that has flower girl coloring books (they were a hit!). My cousin Jameson will escort those two lovely ladies down the aisle as the ring bearer. He received a “ring protection agent” certificate signed by the bride and groom.

So six bridesmaids — a nice round number. I wouldn’t be here if it weren’t for them and couldn’t imagine a wedding without them. Two adorable flower girls and one handsome ring bearer who are excited to get dressed up and dance the night away.

Grace K: Can I Put “Wedding Planning” on my Resume?