We set up shop at LoveCraft’s wedding event this past weekend and met a ton of awesome local brides-to-be… and their glorious engagement rings! See 12 of our favorites below: 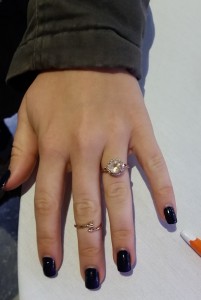 Proposal Story: On February 7th Ethan took me to go “shopping” at Crosswynds Traders in Narragansett. But before we went he took us on a detour to Bonnet point, where we had gone for many walks when I lived in the neighborhood. He walked me out to the point of the Rock and proposed… With the amazing Lauren Halvorson there to capture it all! The proposal was followed by a dinner party with friends at Oceanside at the Pier 🙂 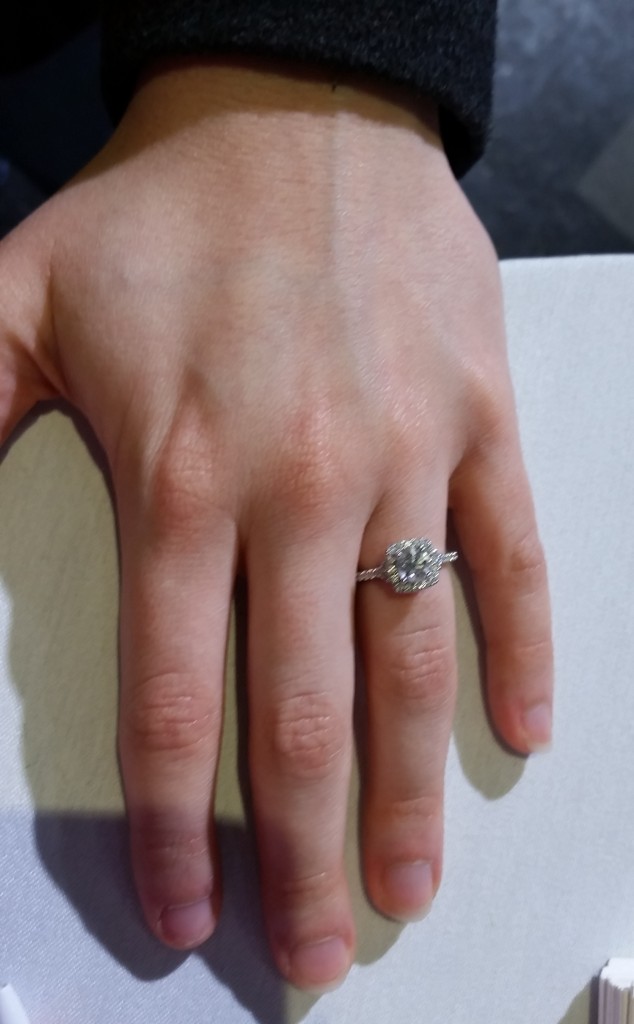 Proposal Story: Dan (my now-fiancé) and I were in Rangeley, Maine this past winter with a group of our closest friends to ski and enjoy the beautiful scenery. This is a place we both love immensely for many reasons but will love even more now that we became engaged there this year.

On the second day of our trip, Dan asked me to join him on a “quick run to the market” to pick up a few things. Unbeknownst to me, we left so that our friends could prepare for Dan’s proposal for when we returned.

As we pulled into the driveway of our rental property, I noticed our friends were holding a sign that read “Will You Marry Me?”.

Dan walked me over to them and as it started to snow, he told me how much he loved me and how he couldn’t be happier than he was at this moment. I said yes, our friends hugged and cheered, and the rest is history! 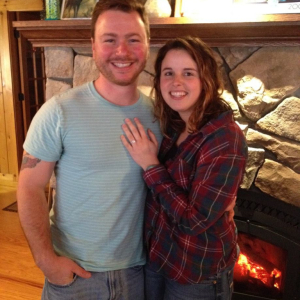 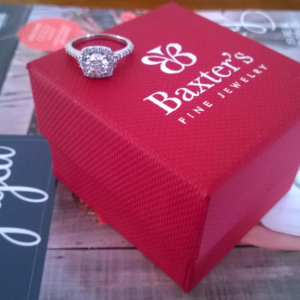 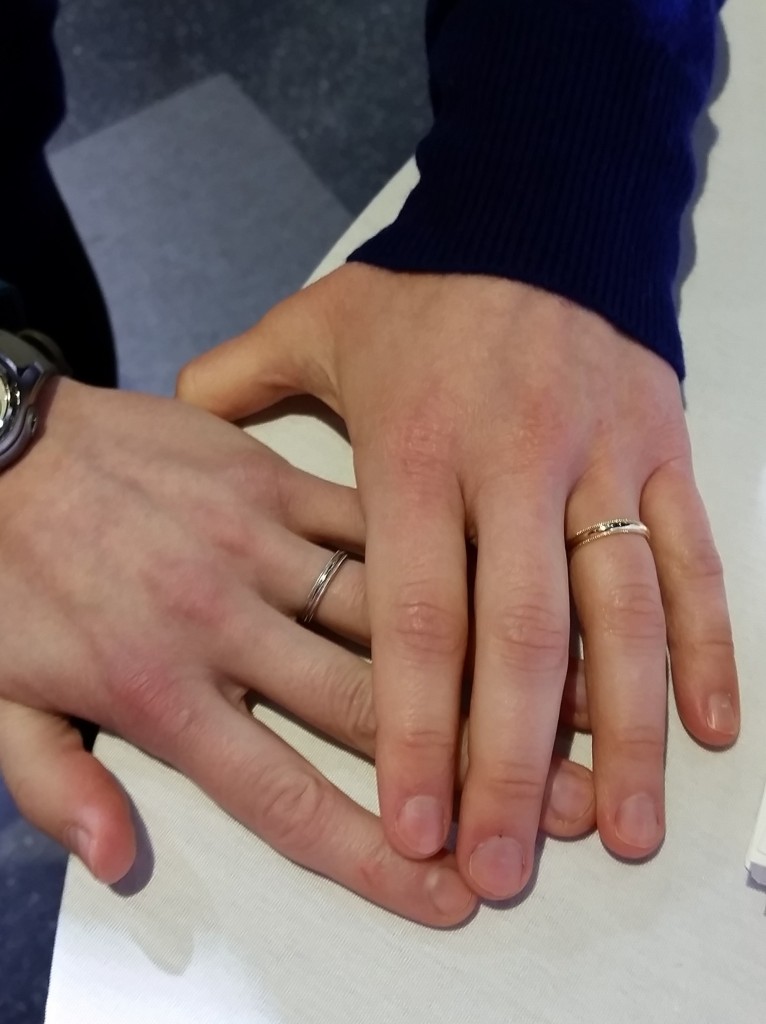 Proposal Story: I’m (Julia) an art historian, but I had never been to any of the Newport mansions, despite living in Rhode Island for six years now. Jen (my fiancée) took me to the Breakers, where I gushed over the period architecture, and then on a drive along the Cliff Walk and up to Brenton Point. We shared a picnic of red wine and Seven Stars olive bread and watched the sun set–I was taking pictures the whole time, completely oblivious! She asked me to marry her right after the sun went behind the horizon, I said yes, and we both started laughing and crying with joy. It was perfect. 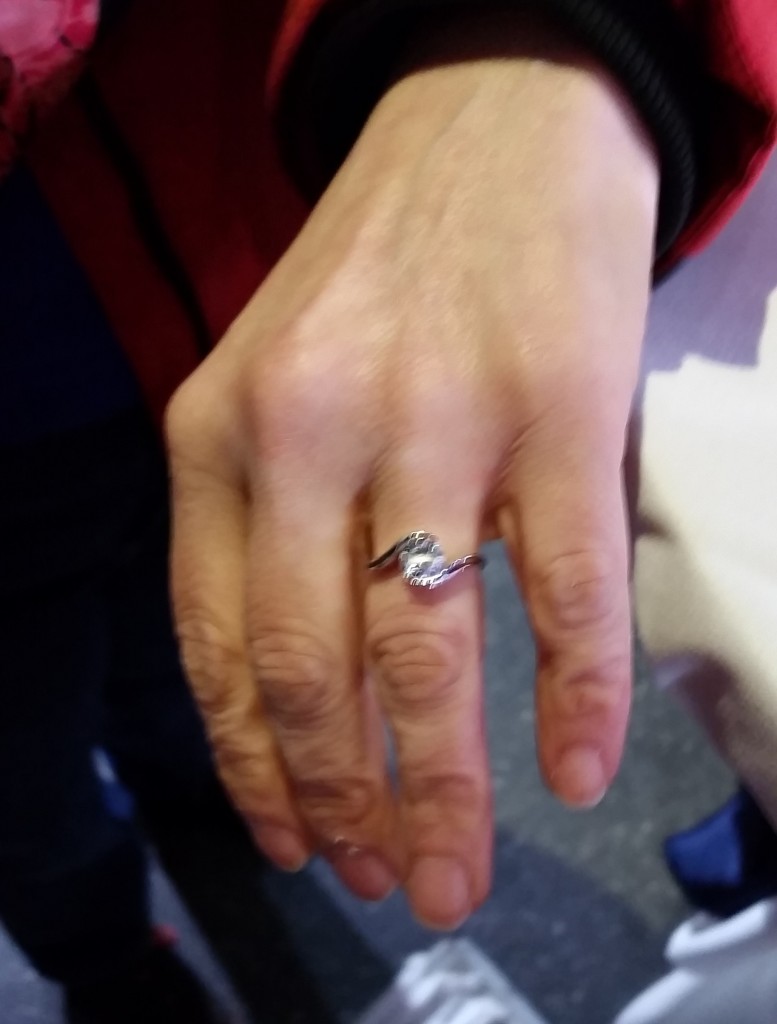 Proposal Story: One Sunday morning, I rolled out of bed later than my boyfriend, as usual. I went downstairs to feed the dog (who rolls out of bed only when I do), picked up the scoop to get her food, and there was a red ribbon with a cheap ring attached. I turned around to ask him what this was, and he was next to me on one knee, proposing! Turns out he had put other rings all over the kitchen, a total of 6, because he wasn’t sure where I’d go first. We then went ring shopping the next week, and I picked out this one! 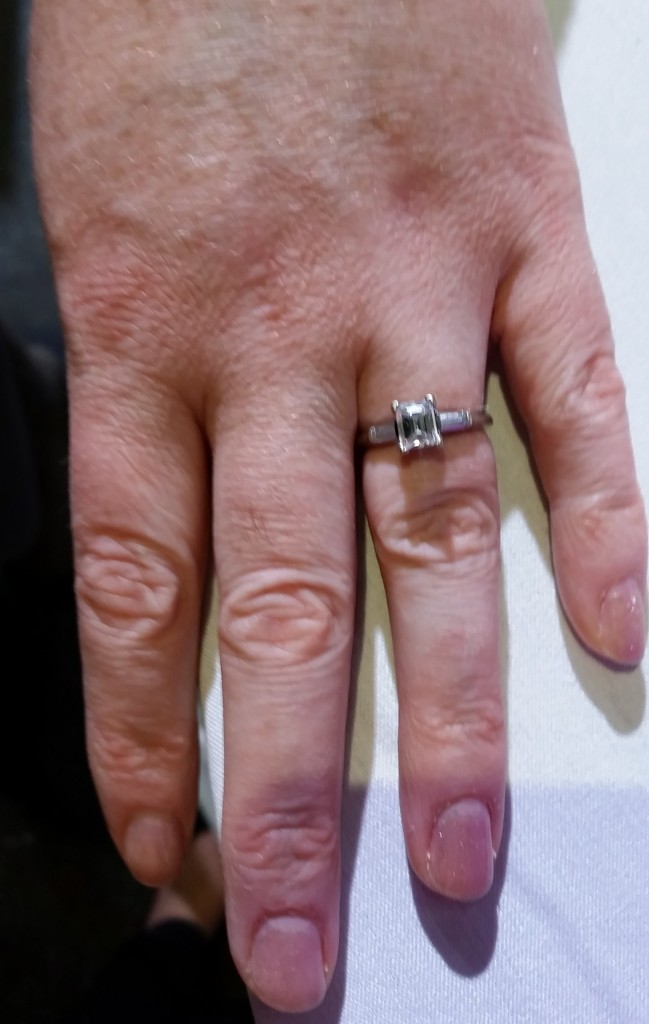 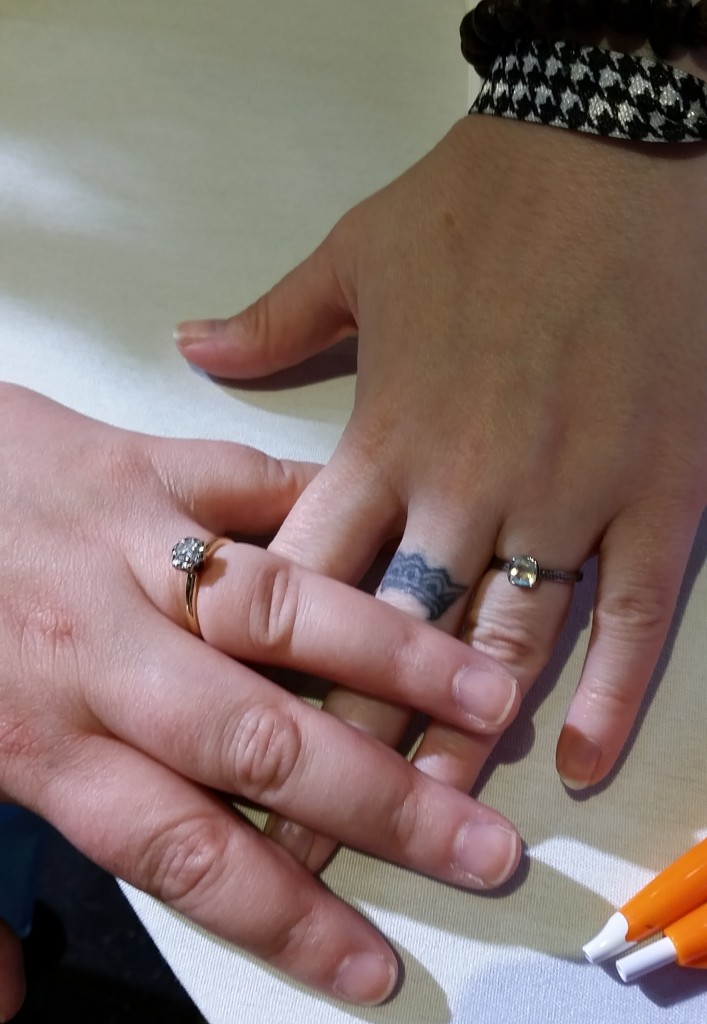 Proposal Story: We each wanted the opportunity to both ask and be asked, so we decided that we would surprise each other by proposing on different days. Lindsey proposed first, using a wooden ring box from End Grain Woodshoppe and incorporating elements of my favorite TV show, Twin Peaks, into her proposal. She proposed at home, where our dogs happily joined in the celebration, before taking me to the restaurant where we had our first date, La Masseria in East Greenwich, for dinner.

I (Melissa) surprised her with an equally geeky proposal about a week later on Sunday morning. Since I am a visual artist, I painted a ceramic ring box using images and quotes from another of our favorite shows, Doctor Who, as that was one the first things we bonded over when we met. I cooked her favorite breakfast while she was getting ready in the morning, and surprised her by setting the table with the ring box as the centerpiece. Of course the dogs once again happily joined in, but I am pretty sure they just wanted the pancakes. 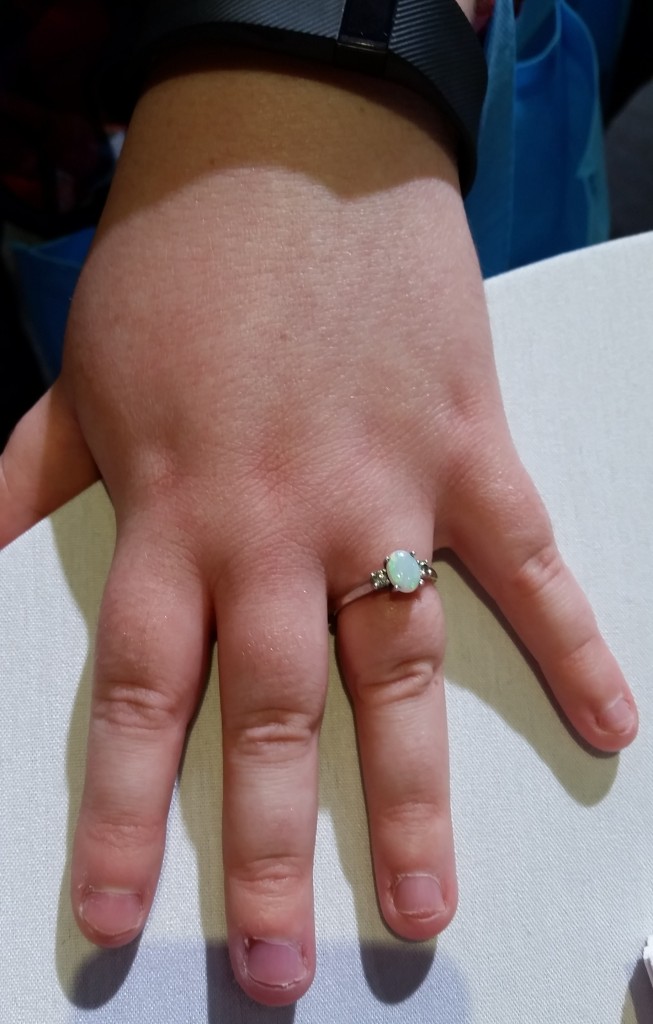 “My fiancé, Justin, took my sister ring shopping to pick it out, which I though was so sweet. We are not a very traditional couple in the wedding sense so the opal really fits who we are. I have always loved gem stones. Truthfully, I can’t defend spending so much money on an engagement ring so I did not want anything over-the-top. I believe the relationship is the important part of the engagement, not a piece of metal (haha probably shouldn’t put that in a wedding blog)! I even said that I didn’t need a ring.  I absolutely love the opal though, it is like the ring was made for us. The stone has some beautiful significance if you read about the properties of opals. I feel like it is a hopeful sign for our future.”

Proposal Story: Justin and I have actually been together for almost ten years – it was our junior prom that ultimately brought us together in the first place, just like a cheesy teen romcom. Last April we had planned a weekend getaway at the Providence Omni Hotel for our anniversary. Justin is a caregiver for his stepfather so we value the time we are able to be alone outside of a stressful situation.  He also had really wanted to see the RV show (this pretty much sums up our quirky relationship).  During the day, he gave me little presents (even though we had agreed no presents), including Post-Its (my favorite!) and a necklace he made that held the stem of his boutonniere from our prom.

We dressed up and had an amazing dinner at Flemings and then went to Dave and Busters at the Providence Place Mall (one of our favorite places to go). Once we got back to the hotel room at 1:30 A.M., he proposed as we overlooked the Providence skyline. It was so funny…I did not even realize that he was nervous because we almost got stuck in the elevator on the way out of the mall. Both of us were a little shaken-up so it hid any nervousness he might have shown. Another funny coincidence: We had redeemed our tickets for candy rings, which I started eating as soon as I got back to the room. Even after 10 years, I was so surprised. Going to the RV show the next day was our first “engaged outing.” I was so thrilled.  I joked with Justin that now I could not complain about going into Every. Single. RV.  Because he proposed on our 9th anniversary, we are hoping to make Dave and Busters our anniversary tradition! 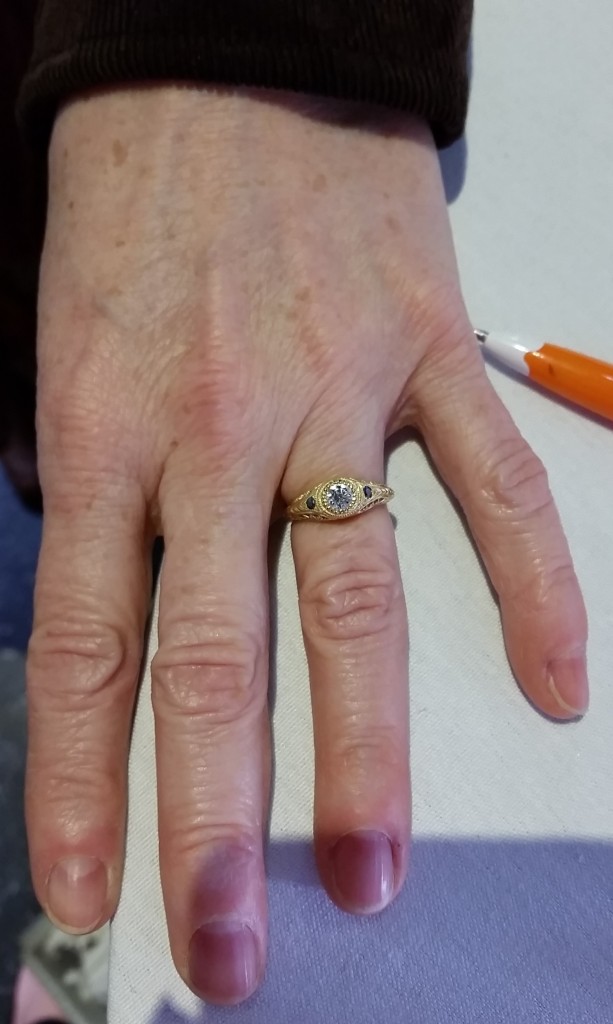 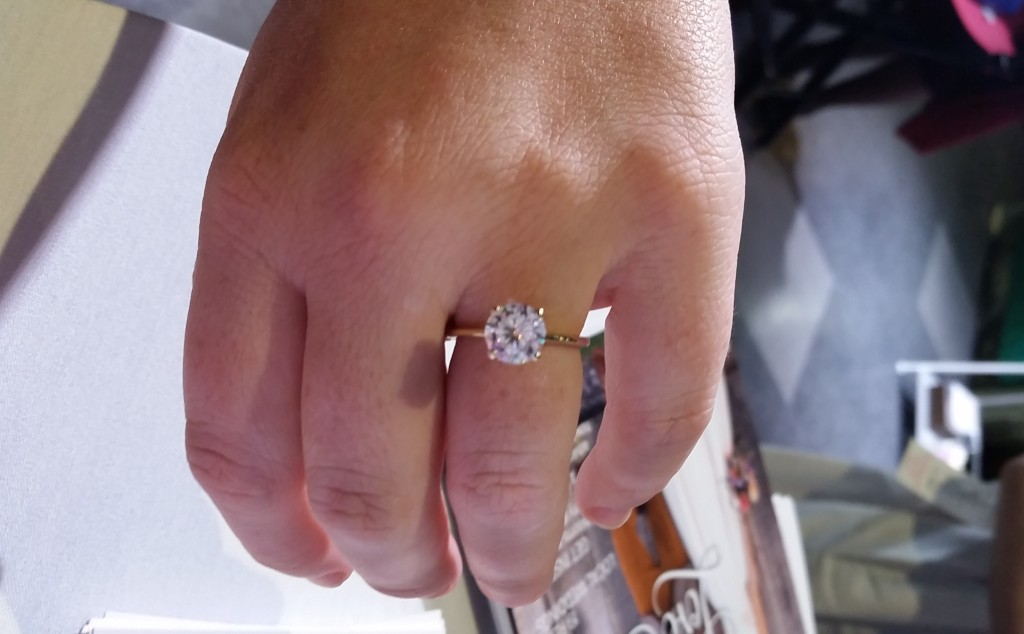 Proposal Story: My fiancé proposed at our home one summer night last July. We were sitting in Adirondack chairs with wine and blankets around our fire pit. It was very laid back, sweet and romantic.

My favorite part is that it happened at my most beloved place: Home. 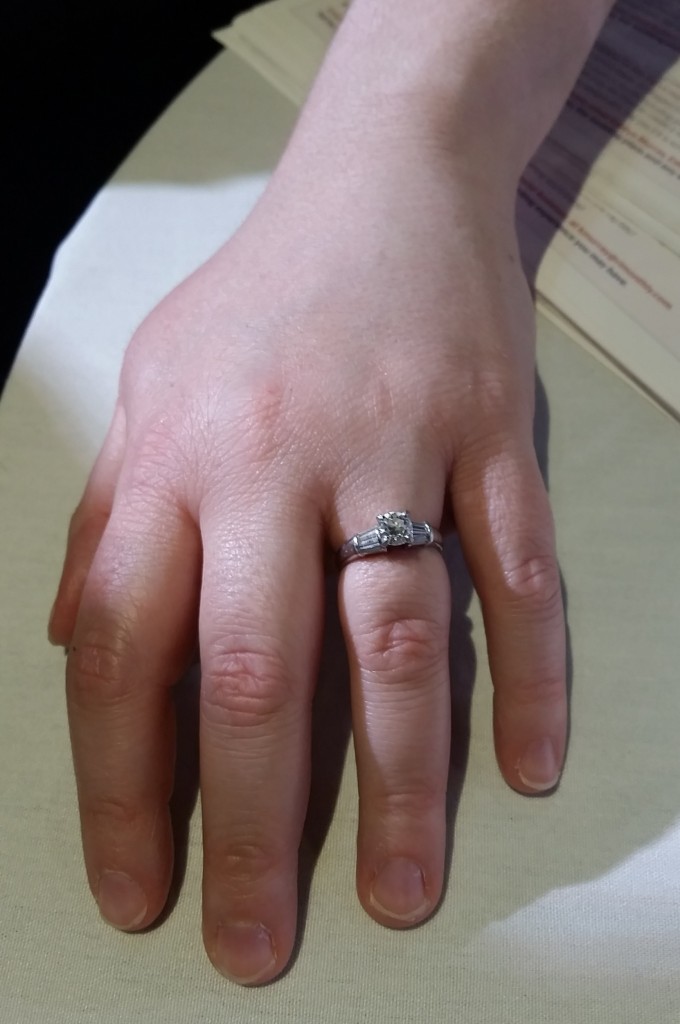 Michael and I had been dating for 5 and a half years. We had plans in Boston with my friends for a weekend in December and, on a whim, we decided to do a little Christmas shopping at Faneuil Hall. It was a beautiful night and all of the trees and lampposts were twinkling with tiny lights and it looked magical.  Michael and I were petting a family’s adorable golden retriever puppy on a sidewalk when I saw across the cobblestones the Neuhaus chocolate shop. The last time I had a Neuhaus chocolate was 10 years ago when I backpacked in Europe, so I was very excited!

Michael didn’t exactly know what I was doing  and didn’t want to leave the dog. By the time  he met me at the store, I had finished my purchase and already had a chocolate in hand. We agreed to eat one at the same time  and as I had eaten mine I said,  “Michael, I can’t be any happier than I am RIGHT NOW.” He then got on one knee and very quickly asked, “Shira, Will you marry me?” He popped right up and I made him repeat himself because I thought he was joking. He did it again, on one knee and with a gorgeous ring. I said yes, the salesgirl cried and now we are happily engaged! 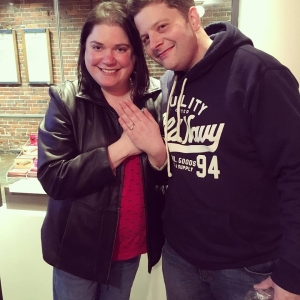 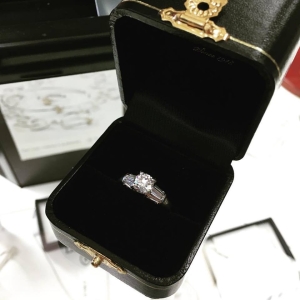 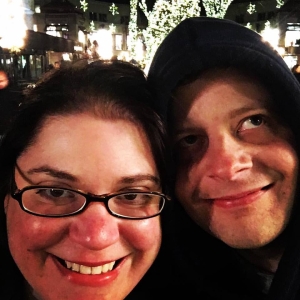 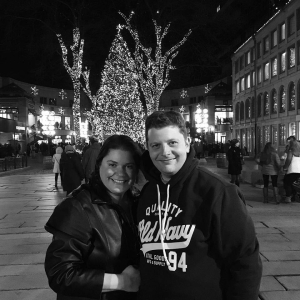 Now we want to see yours, too! To be featured in our next engagement ring round up, send in a picture of your bling and the proposal story that came with it to Kaitlyn at kmurray@rimonthly.com.