The story of how Ryan and I met goes back, technically, to about 2010 when I was at a bar in Newport and one of my friends invited his friend Ryan (and his girlfriend). We probably exchanged “hello’s” at that point, but we don’t count that as our “how we met” story (for obvious reasons). So fast forward to Columbus Day of 2015 – Ryan and I happened to both recently break up with our significant others. Ryan was on a hunting trip that weekend with our mutual friend (the same one from Newport), who then said to him ‘Ya know what? You should re-meet my friend Alana. You guys are both recently single. Actually, now that I think about it, you guys would be great together!”

Meanwhile, that friend had texted me the same day and said “Do you remember my friend Ryan?”…I said “No, why?” (Sorry Ry!!). He told me the same thing he had said to Ryan and next thing you know, on November 16, he invited both of us out to PJ’s in Johnston. RYAN BARELY SPOKE TO ME. We were in a group of 5 people and we kept looking at each other, but we barely spoke. It was like a middle school crush thing. Anyways, that night, our friends planned a “Friendsgiving” for that next Sunday, and it gave Ryan a good “in” to say, “Well I’m not going alone. Alana, you’re single right? I’ll pick you up at 1 and we can go together!” I was shocked and secretly so so excited but tried to play it cool. As I left, he asked for my number, and I expected to get a text come Saturday about Friendsgiving. Instead… I got a string of texts as soon as I left the bar. Pictures of his dog, and his truck; texts saying he is a country boy (Umm I know, you’re from Foster) who likes to hunt and fish…I was laughing so hard that I could barely fall asleep that night. Needless to say…we were inseparable ever since then.

By the way, he would tell the second half of this story completely differently. But I have the texts to prove it.

Ryan and I talked about getting married after like the first week of dating. We’ve been obsessed with each other since day one. But we had recently bought a house that was getting completely remodeled, and the holidays were upon us, so I figured an engagement would come sometime after Christmas.
On October 25, 2016, which started like any other Tuesday, I went to work in a dress, with makeup and hair done, and sat on the ABC6 News anchor desk to “do a satellite interview with Harry Connick, Jr.” I was so excited and had a list of questions, by the way. All mic’ed up and ready to go, I suddenly see my sister Katie and best friend Devyn, along with two people with cameras, walk into the studio. My sister, Katie, was holding a sign reading “Alana” with an envelope underneath labeled “1”. In it was a letter from Ryan saying he’d organized a full day of fun and adventure for me, Katie and Devyn. He told me to enjoy it, and that’s it. (Everything was caught on our ABC6 camera, which was great!!) 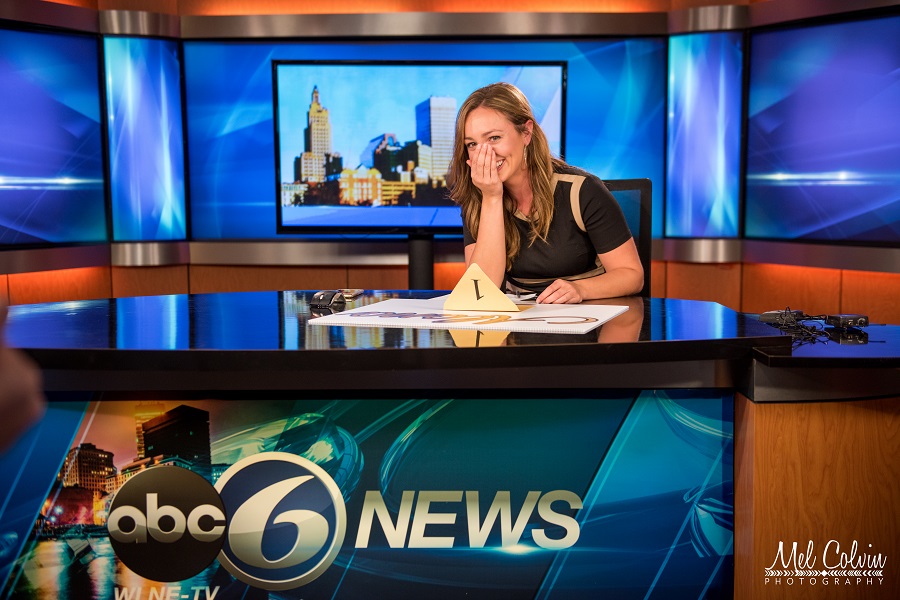 I cried, obviously, and they walked me off set and put me into a limo that took us all around the state to various spots which were meaningful in our relationship. First was the Burrillville home of that mutual friend, Jeff, and his wife Andreia. They hosted the infamous “Friendsgiving” and of course can take credit for introducing us. They met us outside with letter #2, another love note from Ryan. Then it was off to our first apartment together in North Providence, and of course letter #3. From there, our new home together in Warwick, and letter #4. After lunch and a nail appointment, the limo took Katie, Devyn, the photographer and videographer and me to our final destination – Lincoln Woods. This was where Ryan and I had our first official date, the day BEFORE Friendsgiving. We walked our dogs throughout the park and held hands (aww) and it was always really special to us. I knew right away this would be the place that Ryan proposed. But not until I went on a scavenger hunt for 10 more letters. The kid really made me work for it. Each letter talked about different moments in our relationship. He nailed it – he didn’t miss a thing.

Then, right around 4:00, I opened my last letter and looked down the hill – he was standing at the spot where we took our first selfie (this was a big deal). It was right on the water and the sun was about to set and he got down on one knee. It was perfect. 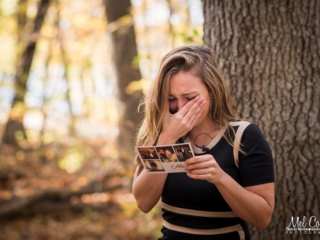 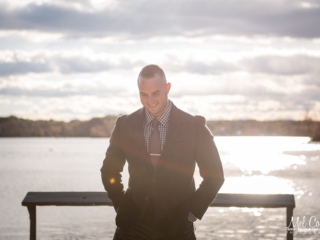 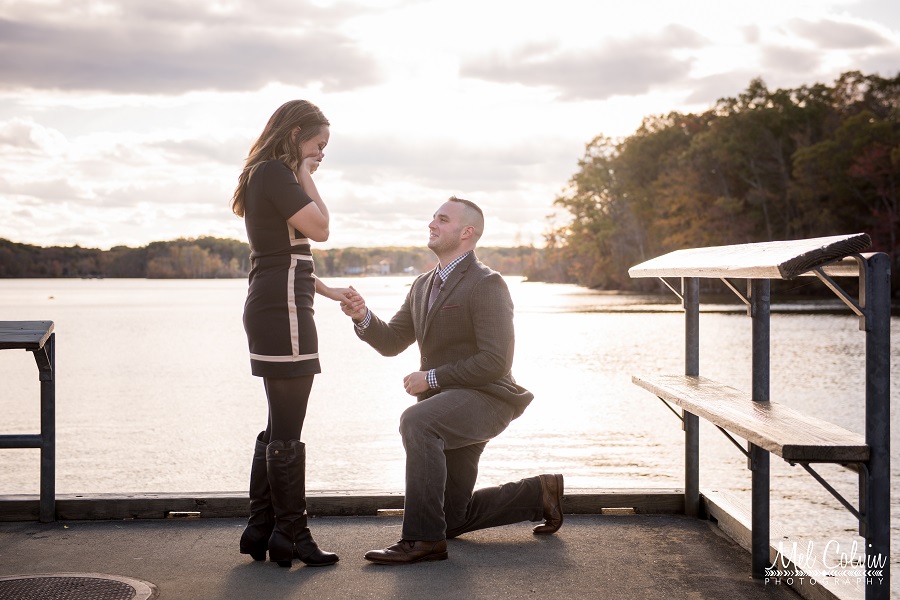 Katie, Devyn, and Jeff were all there and of course the photographer and videographer captured EVERYTHING (Thank God because I can’t remember some of it). We did a photo shoot and just when I thought it was over, another black car showed up. The driver rolled out a red carpet, threw rose petals, and tied balloons. He took us to my favorite restaurant, Los Andes, where Ryan reserved “a table by the fish tank”. After dinner, the two of us got back in the car and I was told we were going for a nightcap at PJ’s, which has been one of our favorite places since we met. I walked in and was surprised with all of our friends and family there to celebrate our big day.

Ryan thought of EVERYTHING for this proposal, and he knew just how to make me feel so special and loved. He even got me the next day off of work! It wasn’t about the ring (I mean…I am obsessed with it, but still), or the dinner, or the champagne, it was about the fact that he knows me better than anyone ever could, and he knew exactly how to blow me away. 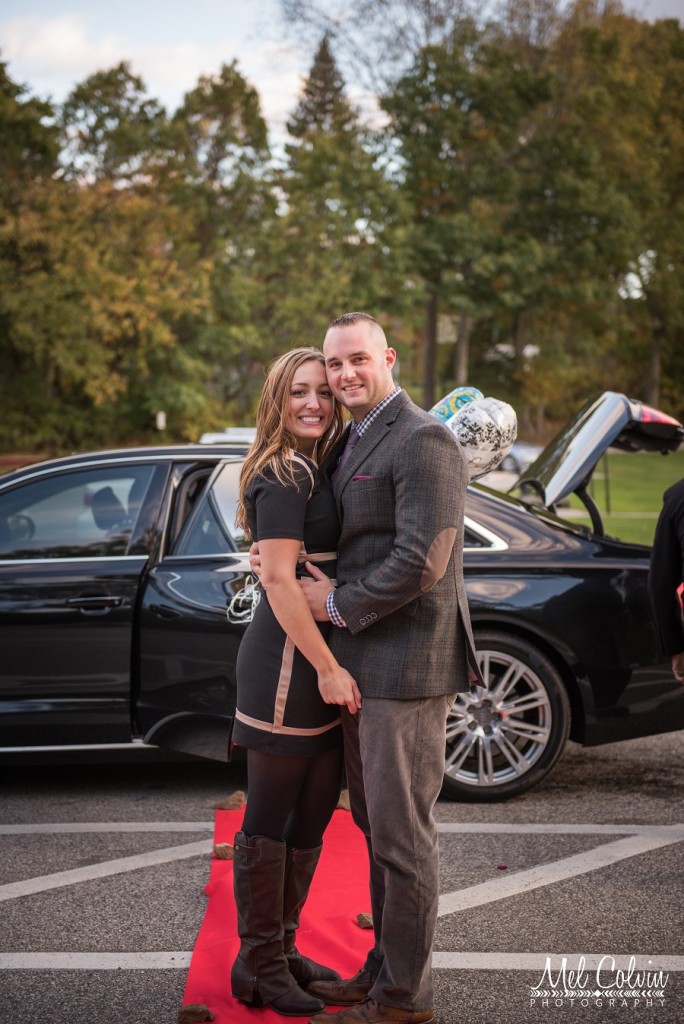