Marissa and Dan
Prev Next
Search 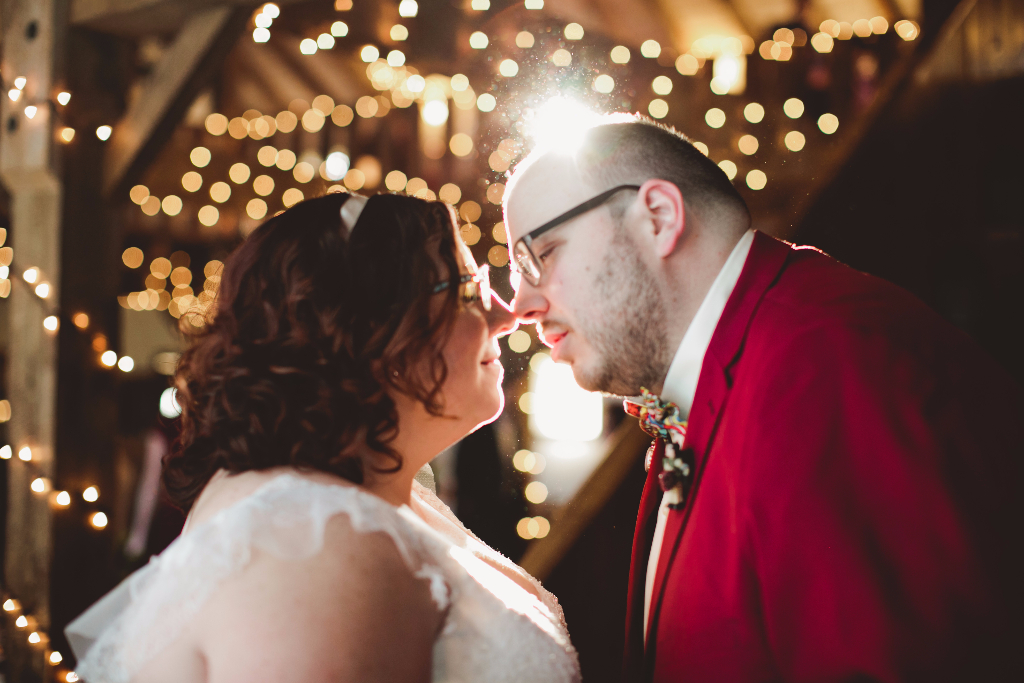 “I had so many good ideas!” says Dan of his and Marissa’s first date plans. Because they had met online (shout out to OKCupid.com), Marissa was a little wary of meeting up in person and so Dan kept suggesting they do something that she knew she would enjoy… even if it was out of the stand up comedian’s comfort zone (think yoga class). “But we ended up meeting at a comedy show and going to a comic book store,” he laughs.

Dan must have been wearing his lucky shoes because he later wore the very same brown leather Converse (along with a rad Marvel superhero-clad bow tie) on November 15, 2015 — a.k.a his and Marissa’s wedding day. “His style is super nerdy and I like vintage and rustic themes,” Marissa explains. “Our tastes weren’t easy to combine, let me tell you.” Yet they did so flawlessly: Dan had his bow ties and self-made boutonnieres fashioned from Legos while Marissa incorporated vintage-inspired colors and touches of lace. Meanwhile, their venue, Bittersweet Farm, took care of the rustic aspects (the ceremony took place in its wooden barn) as well as their desired brunch menu (the main entrees were ham and grits, Dan’s pick, and chicken and waffles, Marissa’s favorite).

These newlyweds will be the first to tell engaged couples to forgo tradition and to stay true to their relationship and their personalities. Also, “Surround yourselves with as much positivity as possible.” For Dan and Marissa, this included an a friend slash comedian in a top hat for their officiant, a best woman, gold-painted dinosaur figurines for escort cards, a quirky one-man band, and a ceremony reading done by Faith, their beloved niece-turned-daughter. “At the rehearsal dinner, we had given some of the younger guests framed four leaf clovers and told them they were each good for making one wish,” Marissa recalls. “Faith used hers to wish that we would adopt her… Little did she knows that it was already in the works.” Be still our hearts.

Click through the slideshow below for a more complete picture of Dan and Marissa’s big day.

Calling All Brides and Grooms, There’s a New Venue in Town!