Allison and Christopher
Prev Next
Search 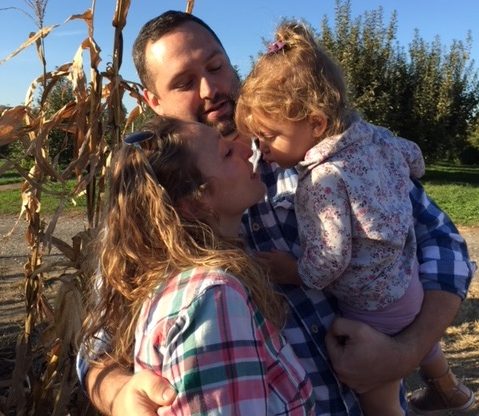 Does it get anymore adorable than enlisting the help of a toddler to pull off a picture-perfect (or, rather, video-perfect) proposal? Probably not. After stumbling across a clip of the engagement on Baxter’s Facebook, we knew we had to get the full story from its leads, Allison and Christopher (now newlyweds!). Watch the full video below and then read on to see if Chris’ little helper also scored an invite to the wedding (spoiler alert: she did).

Allison: We met at Target actually, a place we were both working at the time! I was (and currently still am) the pharmacy manager at the CVS Pharmacy within, and he was the new logistics manager — recruited from upstate New York. He came by the pharmacy with the other store leaders for introductions and I could tell he was romantically interested. I thought, “Oh boy, now I gotta let this guy down gently…” But the more I chatted with him, the more I realized he was very funny, kind, and seemed like a great guy. He popped by the pharmacy a lot more than his job required and was always stirring up conversations with me. I decided to casually ask him to grab a bite downtown, and even though I didn’t consider it a date back then, the rest was history! 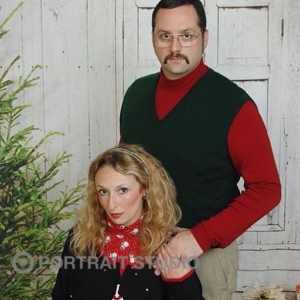 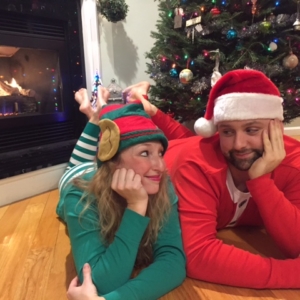 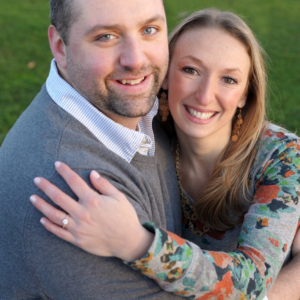 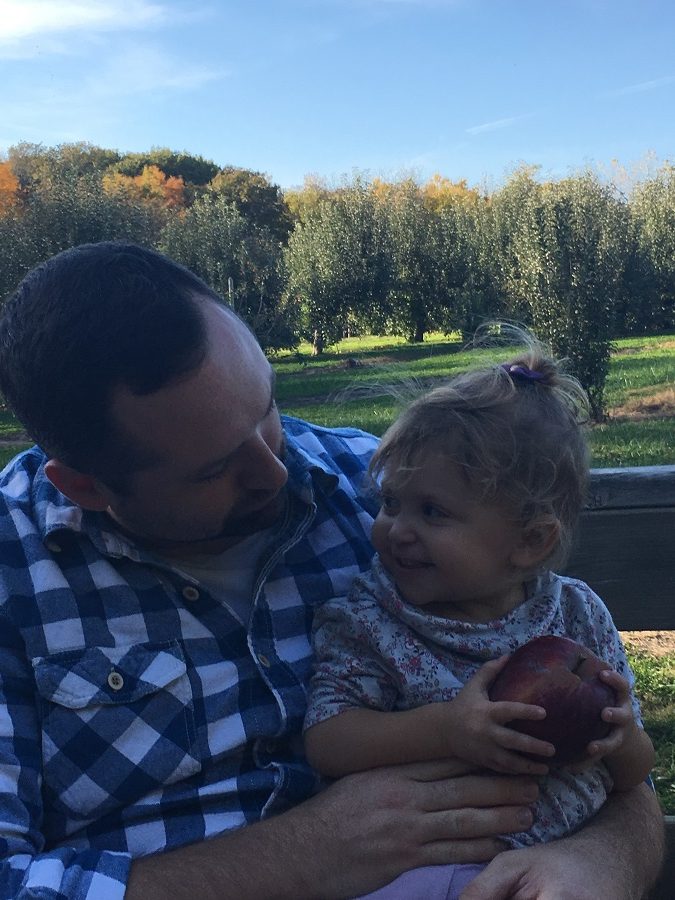 Who was Chris’ accomplice?

Allison: The little girl is my cousin’s daughter, Eliana. My cousin and I are very close so I have always referred to her daughter as my little niece. She was almost two at the time of the proposal. My husband had only informed my cousin’s husband the day prior of his plan and then my cousin the morning we went apple picking! I don’t believe Eliana was clued in at all; the whole execution was just based off of “fingers crossed!” She’s a very sweet little girl though, and she did such a great job assisting in the proposal of a lifetime! My husband knows how much I care for her, so involving her in that special moment was perfect to me.

Tell us about the proposal.

Allison: Christopher proposed on October 23, 2016, about a year and six months into our relationship. We were visiting my cousin and her family in Nebraska and we decided we wanted to spend the day apple picking so we could make a cobbler later on. I didn’t think anything unusual about it at the time, but looking back on it, I did find it funny that my cousin asked what I planned to wear that day, and that Chris totally overreacted when I grazed his pocket trying to hold his hand (apparently the ring pocket was in there — I was oblivious).The plan was supposedly to propose in the apple orchard, but it had rained the day before and the ground was pretty soggy in the field and there were lots of fallen rotten apples around. He decided the corn maze would be more suitable and only right before we entered did he hand off the ring box to Eliana (which I mistook for an apple in 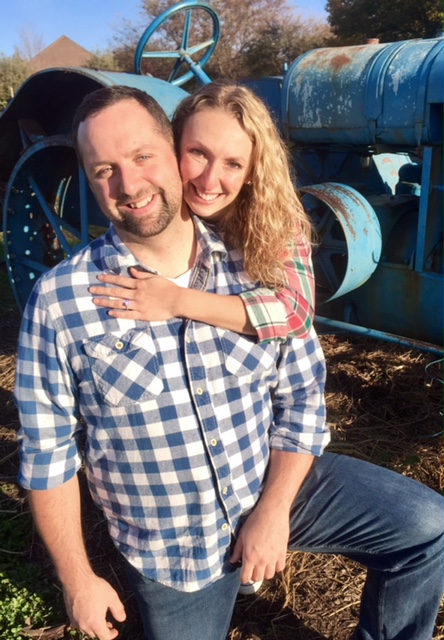 her hand originally because she was eating one when we entered the maze!) We found it comical later that the maze was so easy (and also pretty decrepit) but I wouldn’t change any aspect of that day for anything! I saw the Baxter’s symbol on the box when Eliana outstretched her hand to me — they have been our family jeweler for many years now so it was easy to pick out. I think a part of me knew there was a ring inside but apart of me still wasn’t sure! I honestly even thought for a second, “Where did she get a Baxter’s box to play with?” When I saw the ring intact inside I looked around for Chris and only knew at that point that he would be on his knee behind me. I had been playing with an old ear of corn along our short journey in the maze so when he summoned me over to him, I thought, “Oh man, I can’t get proposed to with this disgusting ear of corn in my hand still!” So the “corn toss,” as it’s been called by friends and family, was also a very laughable moment afterwards. My cousin took it upon herself to video the whole thing,  and that certainly made all the difference!

Tell us a bit about the ring.

Allison: I had never discussed details with Chris in regards to ring specifics other than that I liked princess cut. He also knew I was very big into rose gold. I had sent my mom a couple photos along the way (within the year) of some rings  and so she and him collaborated. Apparently it took him versions total to get the perfect design — he even ended up changing it for the final ring (of course my favorite and absolutely perfect for me in every way) the night before our trip! He was at Baxter’s until they closed along with another man who was proposing on a trip the same weekend (and who Chris saw in the airport the morning we left but couldn’t say anything to!) Getting married was definitely something we planned for, but the timing was for sure unexpected. I didn’t even know about him starting his ring shopping process. Apparently he got the first ring a few months before in August! He just wanted to wait for the right moment with the proposal and I would have to say he nailed it. 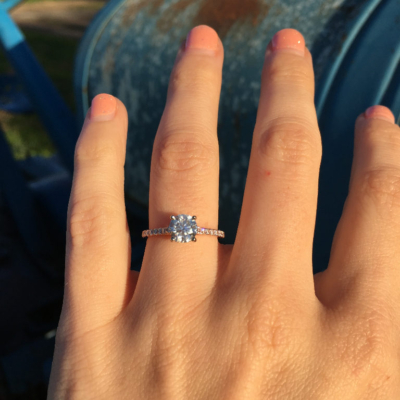 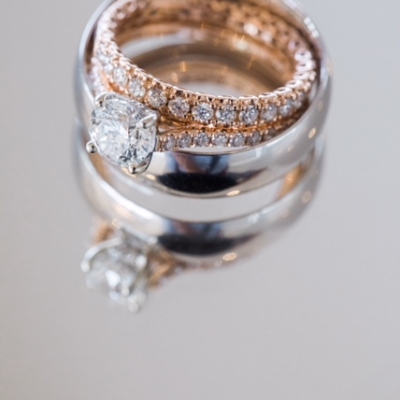 Tell us about your wedding. 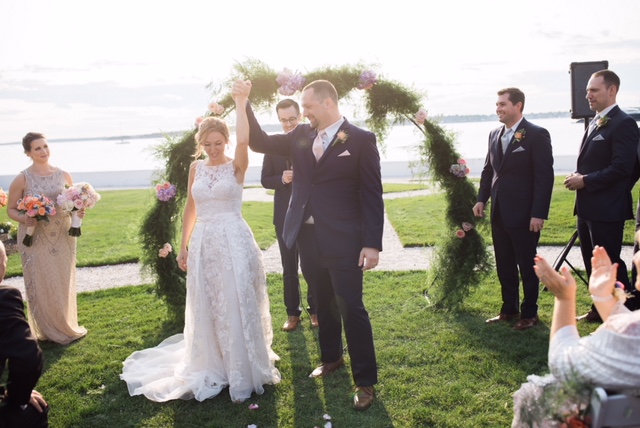 Allison: Our engagement was about ten months; I started the planning process right away after we returned from our Midwest trip (where the proposal was) because I knew I wanted to get married in September. Our wedding was at Belle Mer in Newport on September 10, 2017, and of course Eliana got to play the role of flower girl. Since Chris’ family would be coming from upstate New York, I figured Newport would be a great place for everyone to stay and explore on their first trip to Rhode Island while the weather was still nice. I wouldn’t necessarily say there was a particular theme to our wedding, but everything turned out perfect and all the components of my vision came to life that day. Sitting in the airport waiting for our honeymoon flight to Greece the next day, we discussed how even if we didn’t have an amazing venue with a breathtaking view and top notch service and food- the best part of the whole experience was having our closest friends and family together to celebrate our love. It was just a very personal and humbling experience. Truly the best day of our lives. 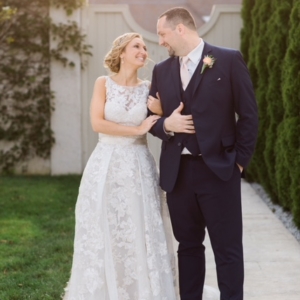 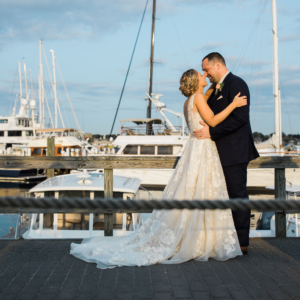 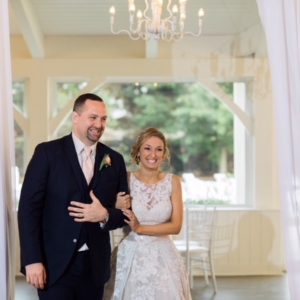 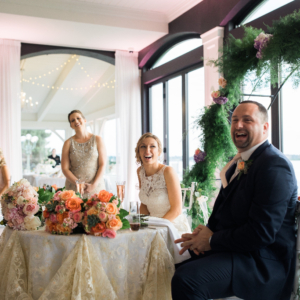 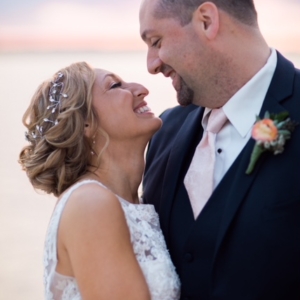 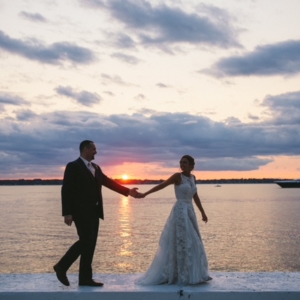 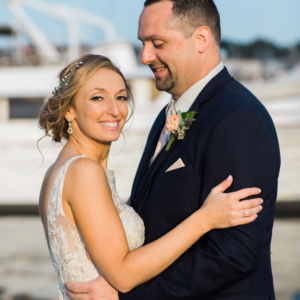 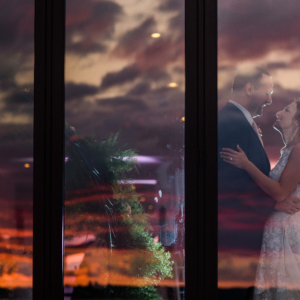 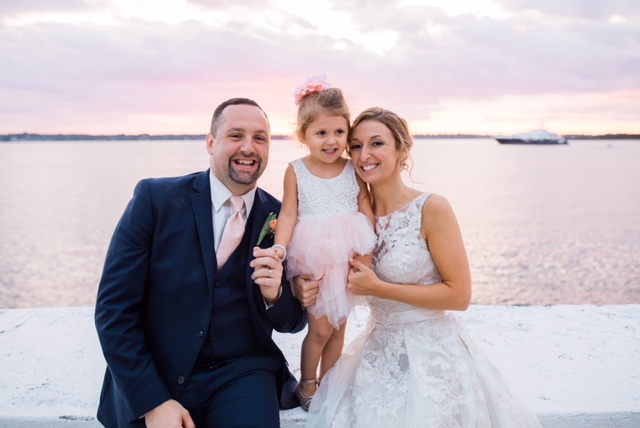