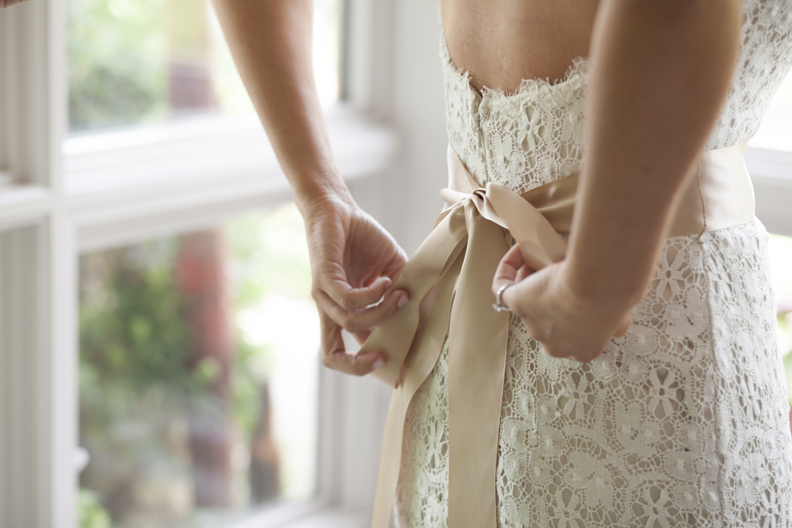 I was already second-guessing my purchase, and then came the three words no bride-to-be ever wants to hear: It won’t zip.

You may recall that a few weeks ago I talked about my experience picking my dress shopping entourage. The focal point of the post was that I initially said I didn’t want anyone but my mother joining me, and then I caved and had a few extra people with me. But, in the end, I ended up walking away with a dress that I loved…

…or so I thought.

Now that it’s all out in the open with my family (mostly, with my mom) I can talk about it here. When I initially went gown shopping I was following my vision of what I’d always imagined I’d look like on my wedding day. And so was everyone else. I tried on a dress that I fell in love with, but I was encouraged to “keep looking.” The next gown that I tried on — a beautiful Allure strapless A-line lace gown — was the gown that everyone had their moment over. They all cried, I got jacked up, etc. The problem is that I had had my moment on the dress just before it.

And so, I got caught up in the excitement. Some of the people closest to me were telling me that this was “the gown I’ve always pictured you in,” and that it was completely stunning. My mother asked about 23,409 times if I was certain that this was the dress I wanted to get, and even told me that I should sleep on it for a night or two, but I was so caught up in the moment that I went for it.

Two days later I decided that I wanted to cancel the order. I had been thinking about it and the dress just didn’t feel like me. I felt pretty, and the dress itself is gorgeous, but it wasn’t the dress I wanted to walk down the aisle in. Unfortunately, the bridal shop said they had already placed the order and it was too late to cancel. I decided to wait until my actual gown came in and I could try on my gown before I made any more decisions. In the meantime I got a little more excited about my gown and bought shoes and my veil.

And then my dress arrived.

And I had to go to my first fitting.

And the dress didn’t fit.

The bridal shop insists that it’s because I’ve gained 1.5 inches in my waist, but since I’ve lost fifteen pounds since I purchased the dress, I don’t think that’s the case. We had ordered the gown a size up with the intention of taking it in for a perfect fit. So, even if I had gained 1.5 inches, the larger dress still should have fit and it didn’t, which makes me think that there was a problem with production and the dress wasn’t made to the correct specifications. But that’s neither here nor there. The dress didn’t fit and I was furious. The seamstress was so patient with me and took the gown home that night to let it out (ugh!) and the next morning I went back and it fit (kind of — it was still huge in some areas, but at least it could be zipped).

But the damage was done. The dress I’d been doubting anyway had became a huge thorn in my side.

I tried. I really did. I looked at all the photos of myself in the dress, and I looked at photos of other brides wearing the same dress on their big day in an attempt to remind myself why I liked it in the first place. I even committed one of the biggest bridal sins — I showed my fiance a photo of the dress, thinking that if he said he liked it then I could be at peace with my decision. Well, he did like it. But I just…couldn’t. The problem is that I don’t think I liked it that much in the first place. I just got excited that everyone else liked it and I got wrapped up in the moment.

So this weekend my mother and I (and just the two of us) are hitting up the bridal shops again. I’ll be trying on any and every gown that meets my specifications (lace, with a train and not strapless) and hopefully will be walking out having placed an order for a dress that I feel really and truly excited about. I’ve already got a few ideas (including the dress that I had my original “moment” over), and am really looking forward to saying yes to the right dress!

In the meantime, I’m keeping my other dress — for now. If I don’t find anything I love then I’ll at least have a dress in the arsenal that I know other people love. Or maybe I’ll even try on a gazillion more gowns and find out that I really do love my original dress.

If I do find a dress I love, once it’s been delivered and altered, I’ll be putting my current/original gown (and a beaded capelet I bought for it) up for sale. So…if you’re in the market for a wedding gown sometime early next year, let me know.

Phew! It feels good to get all of that off my chest!

When the Bridal Outlet Owner Becomes the Bride: The Initial Spark