Lisa and Tiago
Prev Next
Search

Tell us how you met: During the summer of 1997, my mom had began working with a family who had just moved to the United States from Portugal. My mom then set up several play dates at the local park with this family. Week after week I began to develop a kiddie crush on this new friend I had made; Tiago was his name. Unfortunately a few years later our families lost touch and I no longer got to see or play with Tiago. Years went by and I was now in my freshman year of high school. I remember walking down the stairs at dismissal and saying to my best friend “Is that Tiago?” Without her even giving me an answer I embarrassingly turned to him and said, “Hey, remember me?” He was so caught off guard, his face was as red as can be but he did remember me. A few months later we became high school sweethearts. We dated throughout high school and my first two years of college. My junior year of college Tiago went to work nationwide and we both decided to continue life as separate individuals. I was sure it was over and life would go in a different path. About two years later we crossed paths at my nieces soccer game. I couldn’t help but approach him and ask how he was. That night we talked on the phone until 3 a.m. From that moment, the days went by and our love grew stronger and stronger. Two years later we are now engaged. Tiago asked me to spend the rest of my life with him on a sunset lobster sail in Newport, R.I. I remember looking into his eyes as he asked me to marry him, the happiness wasn’t just about the beautiful ring, it was looking into his eyes and feeling secure that I get to live the rest of my life with the love of my life and best friend. 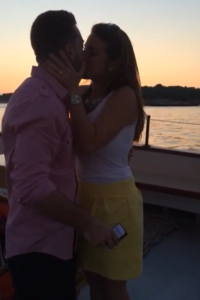