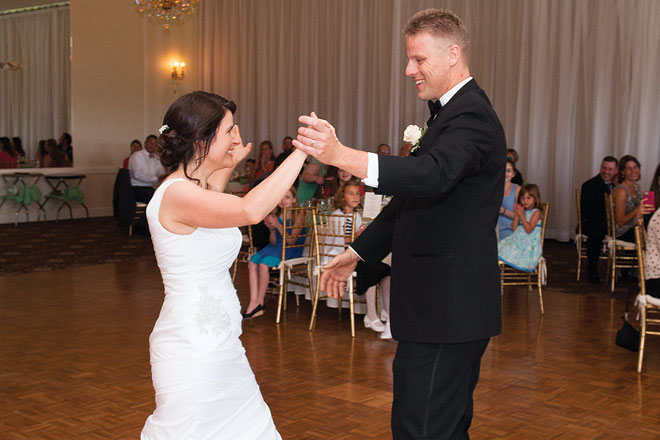 Much like the state population, our employee base is comprised of a nice mix of marital statuses here at Rhode Island Monthly, from those who have celebrated thirty year anniversaries (talk about #relationshipgoals) to recent college grads that are still “playing the field,” as they say. The variety also accounts for an eclectic taste in music, so we thought we’d round up everyone’s first dance song choices, whether they’ve been used already or not, to serve as a bit of inspiration for any of you that don’t already have an “our song” in place. Press play and enjoy!

“That’s What Friends Are For“ by Dionne Warwick, since my wife and I started out as good friends and that song was popular at the time – I think I even did one of those Karaoke recording booth versions for her.

Separately, our wedding DJ thought it would be nice to play a U2 song during the meal, since I am Irish. Unfortunately, his song choice left a lot to be desired… it was “I Still Haven’t Found What I’m Looking For.”

I’d pick “Staralfur“ by Sigur Ros. It’s definitely not your traditional romantic dance song, but then again, I’m anything but your traditional romantic.  For me, romance and love is manifest in spiraling galaxies, stars vaporizing into dust in the inky blackness of space, fireworks bursting into the sky, and the aurora borealis dancing over a frigid landscape. And that’s exactly what this haunting, beautiful, Icelandic song is, and why I would choose for my first dance. So what if dancing to it is practically impossible? We can just slow dance (you can pretty much slow dance to anything slow) and imagine our tiny, wonderful place and new beginning in this massive, mystical universe.

Our first dance was to “At Last” by Etta James. My husband Darren and I love old r&b and blues music, and have always loved this song and loved her voice.

He has yet to put a ring on it, but when the day comes there is one thing I know we won’t have to worry about deciding on: our wedding song. When we first met almost four years ago, one of the first things we had in common was our taste in music. There was one day that we were talking and I asked him if there was a song that made him think of me. He gave one of his trademark smiles, which of course meant yes. He asked me if I had one and the answer was of course. Coincidentally we both had picked the same song- the Hall & Oates classic “You Make My Dreams (Come True).” The real first dance question will be do we stick with the spunky, upbeat original or find a slower more first dance traditional version. We will wait and see.

Our wedding song will be “Home” by Edward Sharpe and the Magnetic Zeros.

Maybe it’s not your typical first dance song because it’s pretty upbeat, but it’s just a really cute folk love song that just makes you smile when you hear it. One of the lyrics in the song is “Home is wherever I’m with you,” and I just think that describes marriage so perfectly.

Ours was “I Don’t Dance” by Lee Brice. It just described our relationship perfectly (from my fiancé’s point of view).

“Wonderful Tonight” by Eric Clapton. Scott and I didn’t plan a “first dance” song. The band, made up of my brother and his buddies, had other ideas for us. When they called us to the dance floor, Scott was nowhere to be found. (It was “Late in the evening,” so to speak, without much lighting around the property.) With Champagne bravado, I yelled, “Where is my husband?” He burst out of the darkness, pushing aside chairs in his path, and swept me into his arms. I’m still swooning.

Actual first dance song: “Been Wishing On” by Big D & the Kids Table – It was a compromise. It’s a group/song we both really love and we liked that it wasn’t what you’d think of as a traditional first dance song. Plus it’s a straight up catchy song… at least I think it is.

As for a song I’d always wanted to be my first dance song, but didn’t use because my husband didn’t know it: “Never My Love”  by The Association. Though I may have used the version by Har Mar Superstar since it sounds more modern and has trumpet; my husband and I both really like ska. – because it’s so pretty, the lyrics are really sweet and I’ve loved the song since I was little.

I’m torn between “The One” by one of my favorite bands, Kodaline, and “Hold you in My Arms” by Ray Lamontagne. I stumbled upon the Lamontagne classic back in high school and, at the time, nothing else could compare. But nowadays I’m really digging the more upbeat vibe and overall sentiment behind Kodaline’s ballad. Only time will tell though – there will be another person in the picture, after all, and I’ll *probably* have to let them have a say!

My wedding song was “Heaven” by Bryan Adams. We started the reception with our first dance to the 80’s version, then at the very end of the song, the deejay transitioned it to the upbeat dance version. We loved it because it got everyone out on the dance floor, ready for a great night. We had many memories dancing to this song so it was very fitting to kick off our wedding with this version.

Our first dance song was “As Time Goes By” by Frank Sinatra, from the movie Casablanca. Early on, when my husband Paul and I were dating, we were walking along the Providence Waterfront and the song was playing over a speaker. Paul took my hand and began dancing with me there on the sidewalk and when it came time to pick a first dance song at our wedding he suggested it (symbolically) as being the first song we danced to together. We took formal dance lessons to perfect our first dance and we nailed it!