Hannah and Drew
Prev Next
Search 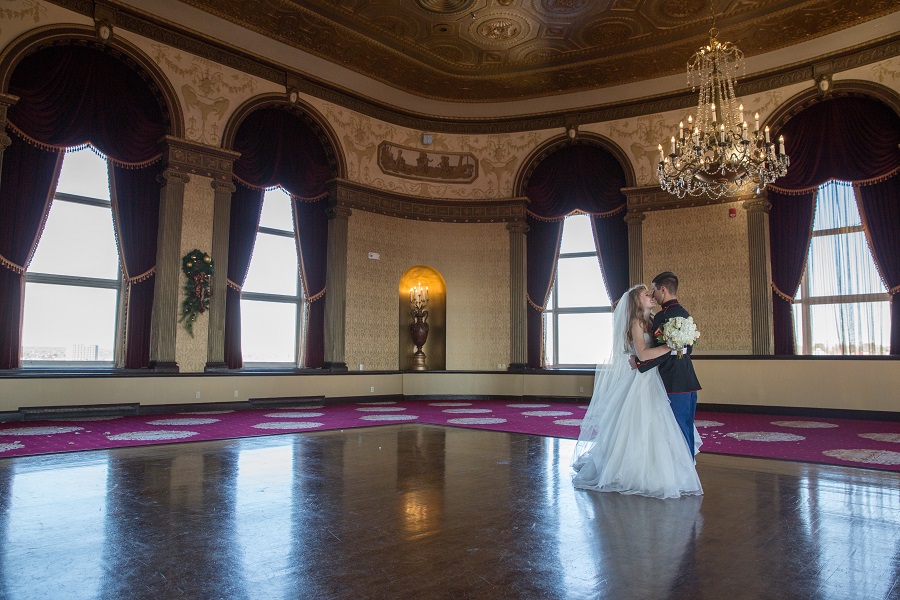 Is there anything more romantic than getting married during the most wonderful time of the year? No, we didn’t think so. From the custom Rhode Island baskets to the adorable end of the day favorite-memory, there isn’t a better wedding to swoon over this Valentine’s Day.

How and when did the two of you meet? Are you from Rhode Island?

We aren’t from Rhode Island; we are from North Eastern Connecticut, right next to Rhode Island. We are high school sweethearts; we met in middle school and started dating our freshman year. 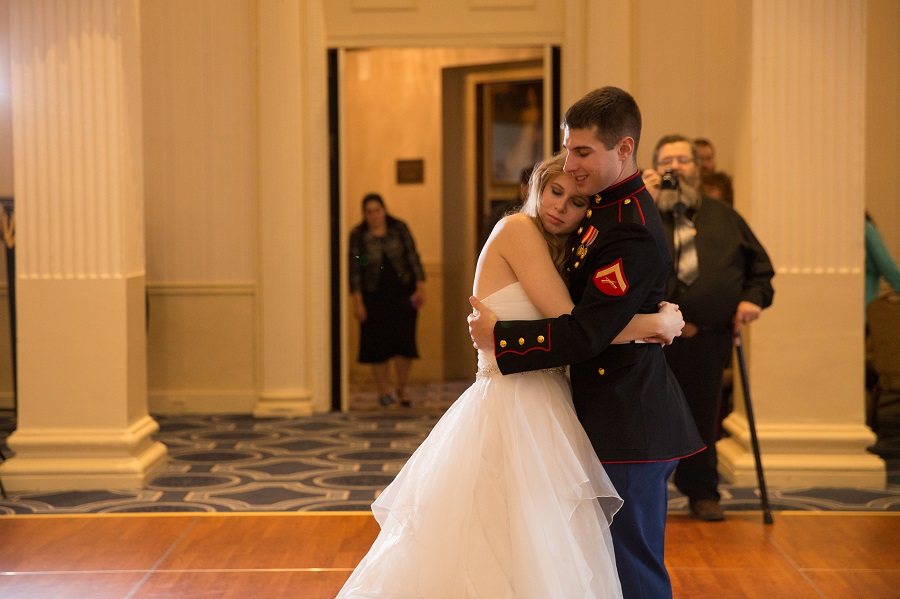 How long were you together before you were engaged? Was your proposal a surprise?

We were dating for four years before we got engaged. The proposal was something we had been discussing, but the way he gave me the ring was a total surprise. When he had come home on leave we went to our favorite diner and he proposed.

Did you always know you wanted to have a winter wedding?

I had always planned on having a summer wedding, but when I began planning I fell more and more in love with the idea of a winter wedding, and looking back now I wouldn’t have had it any other time of year.

How did you come across the Biltmore?

I don’t live far from Providence, so it has always held a place in my heart, and every time I’ve gone into the city I always see the big Biltmore sign. After many failed attempts at looking at venues, I set up my appointment with the Biltmore and fell completely in love with their 1922 setting. 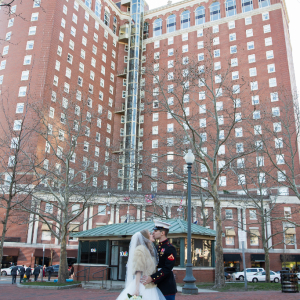 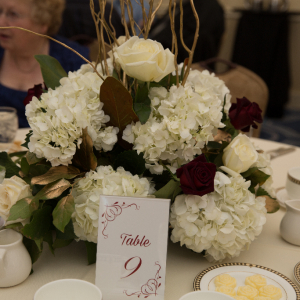 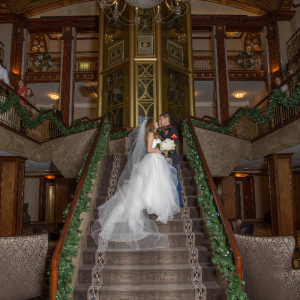 How would you describe the overall theme / look of your wedding?

I wanted to have a very classic theme; my husband is a Marine so I wanted to incorporate his colors into our wedding.

When the day came, were you more excited than nervous or the other way around?

I was so excited I couldn’t sleep the entire night and I still get a big smile and butterflies every time I think about the moment when I saw him standing at the end of the aisle.

The Rhode Island-themed basket was such a nice touch. What was the inspiration behind it?

My mom is a very creative person, so she made all the gift baskets. We had a lot of out of town family coming, so she really wanted everyone to leave with a touch of New England. 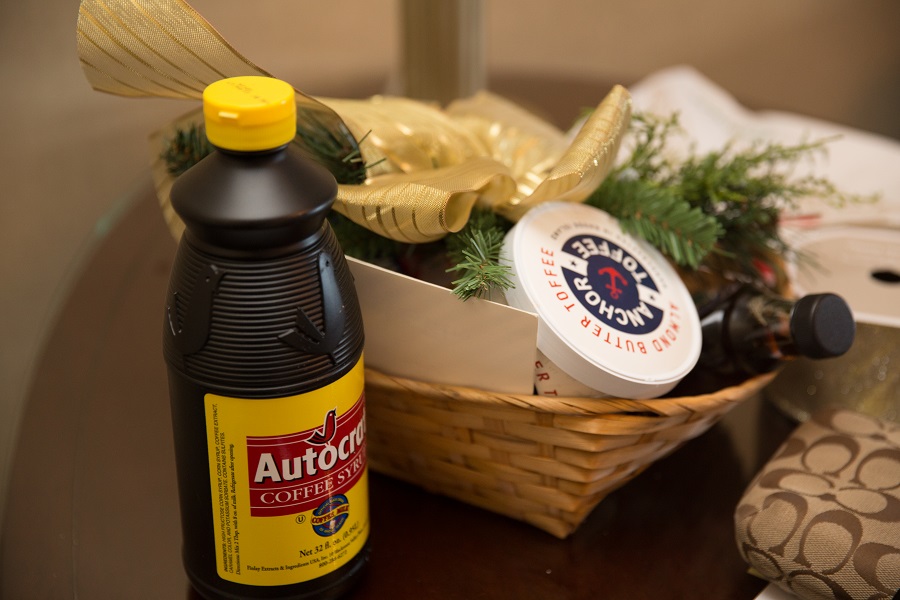 Did you and Drew write your own vows?

We didn’t get to read our own vows at the wedding, but we did write them to hold on to. It was really difficult to think of everything I wanted to say. I had it all in my head but when I tried to put it on paper nothing sounded right. So after the wedding we exchanged our own vows in private and I just told him everything I felt about him and how I feel like he just makes me the best version of myself.

The dance with your father looked so sweet! What song did you two dance to and did he give you any advice?

My dad’s guilty pleasure has always been Cindy Lauper, so we danced to “Time After Time.” I had actually completely forgot about this but when the song started playing my dad was telling me that when I was in elementary school, we went to a father daughter dance and “Time After Time” was one of the songs they played and I was so little I danced on his feet. After that he was an emotional mess, which made me an emotional mess, so not a lot of advice was given, just a lot of happy tears. 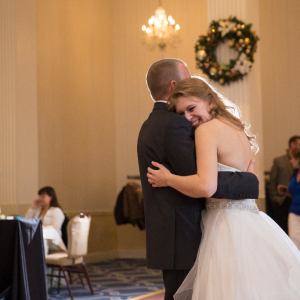 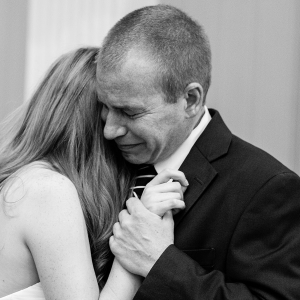 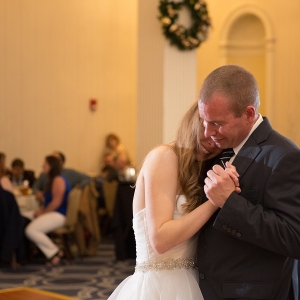 Tell me a little bit more about each of these pics: 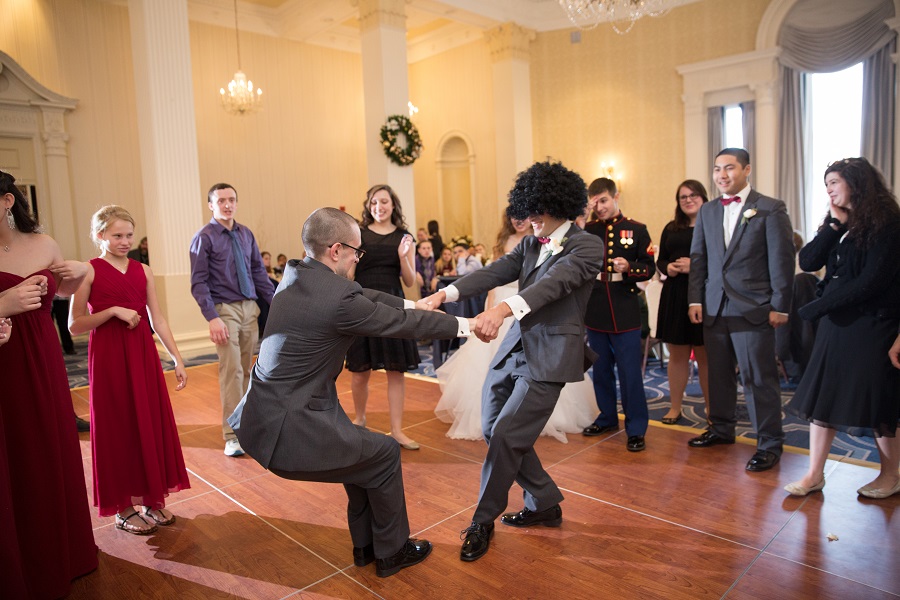 So in this picture one of our groomsmen didn’t want to dance and that is one of our other groomsmen pulling him out on the dance floor. 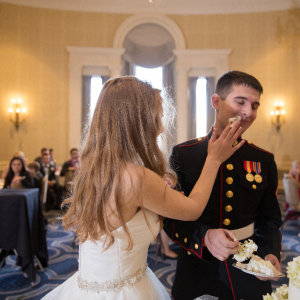 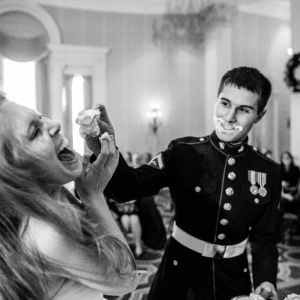 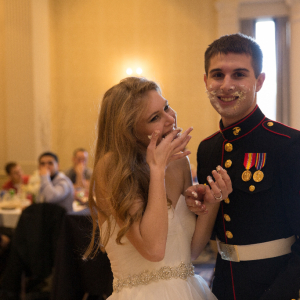 The second set of pictures were taken as we smashed the cake in each other’s faces; I was really excited to try the frosting. 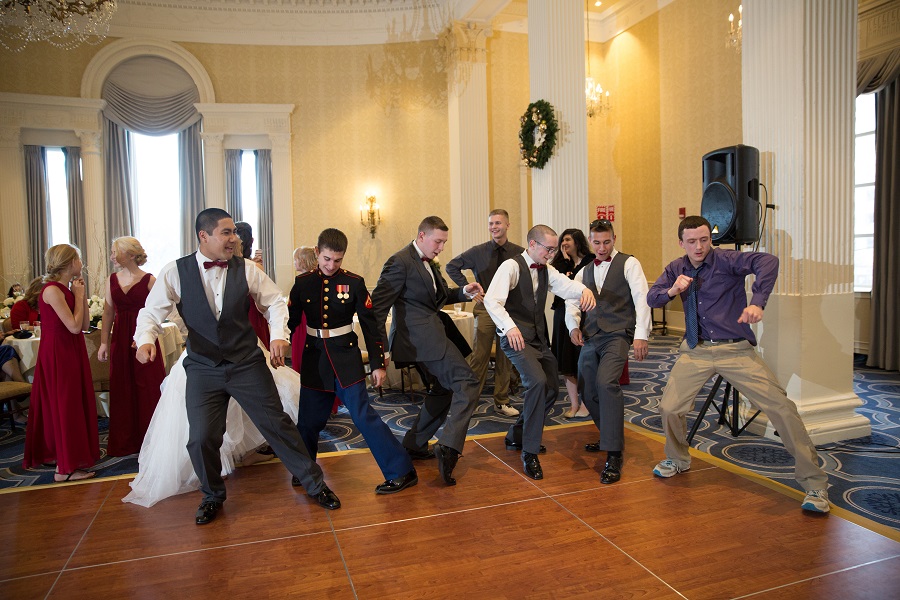 In the last picture, a song was playing that involved a dance and one of the groomsmen knew the dance and he was trying to show everyone else how to do it.

What was each of your favorite moments from that day? 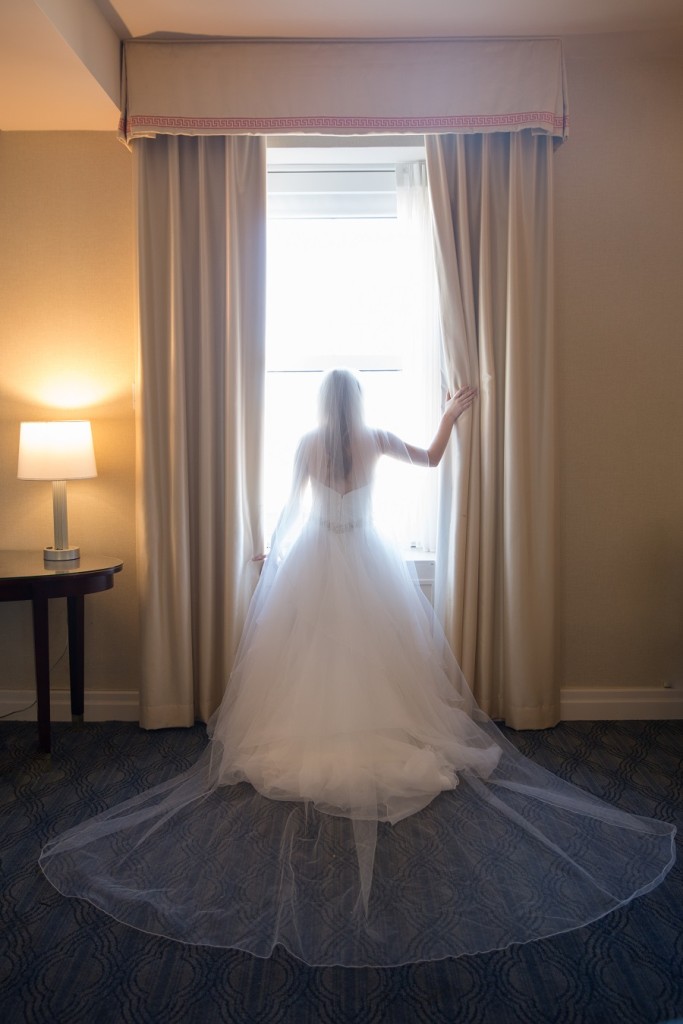 Drew’s favorite part – Seeing me in my dress and how happy and excited I was.

Hannah’s favorite part – Honestly I loved the whole wedding, but my favorite part was when it was all over and it was just Drew and me in our hotel room. We were so hungry that we ordered Domino’s and just laid down and ate pizza and finally got some sleep.

Were there any hitches that day? If so, how did you overcome them?

Everything was perfect except I had a big ball gown for my wedding dress, so some of it spread across the floor and one of our guests stepped on the back of my dress and it ripped. But it wasn’t a bad rip and it didn’t ruin my day. I want to eventually get it hemmed so that way when I show my children one day, it won’t have the rip in it anymore.

Do you have any advice for newly-engaged couples?

Don’t let each other’s families get too involved, and just remember it is a day about you two. No matter what you think will go wrong, more than likely it won’t happen and it will be everything you imagined. 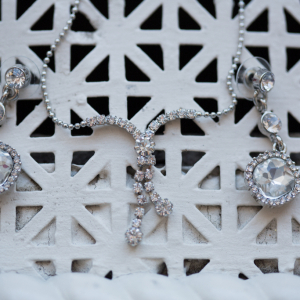 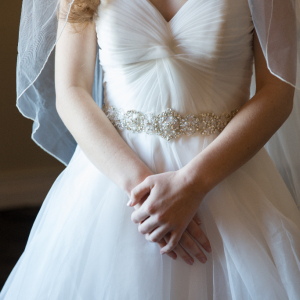 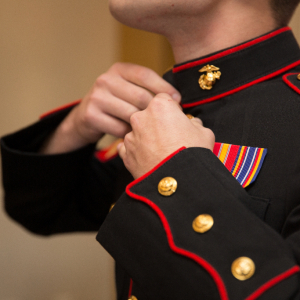 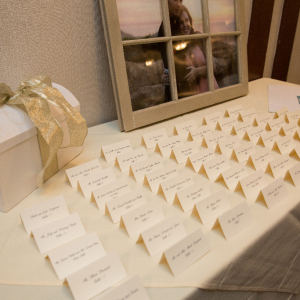 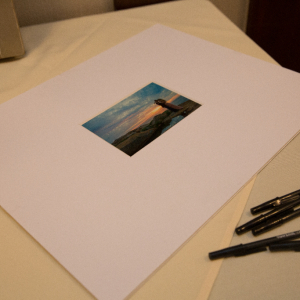 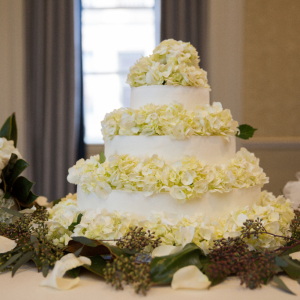 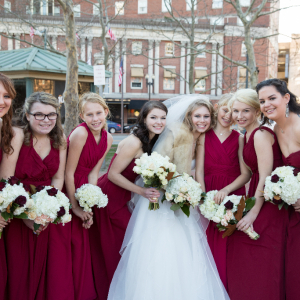 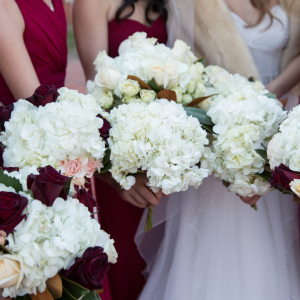 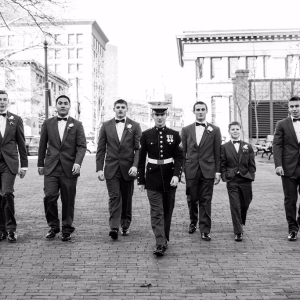 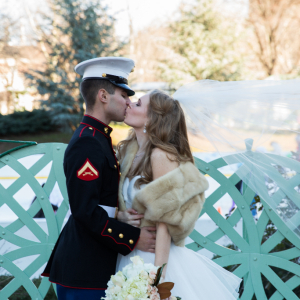 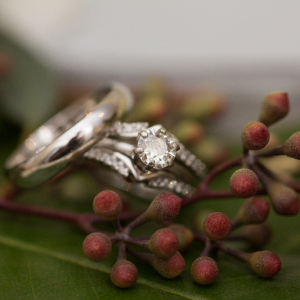 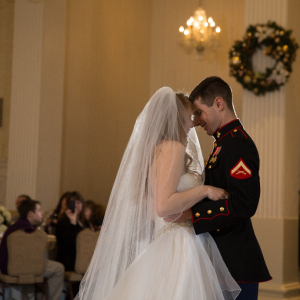