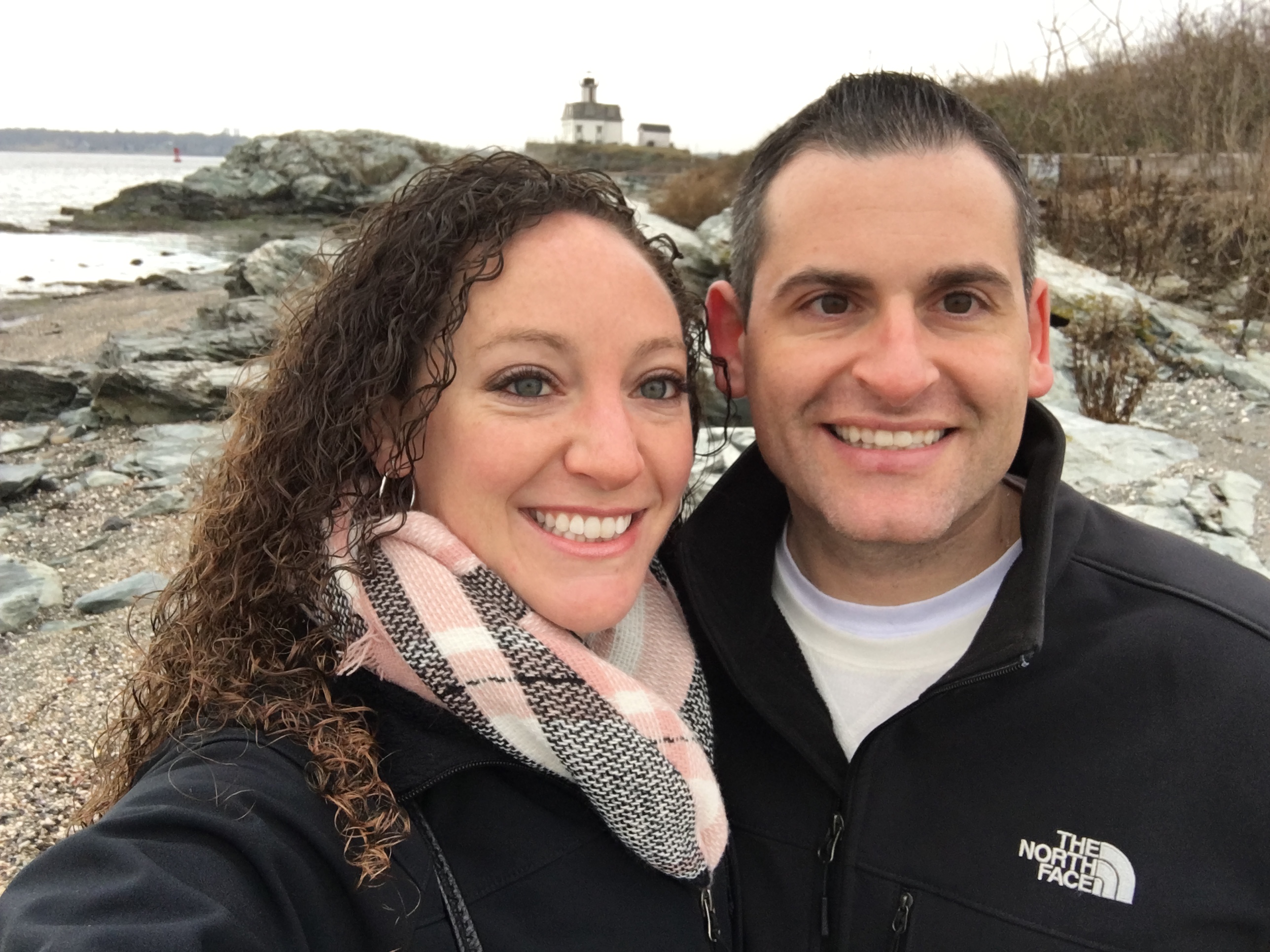 Taylor Butzbach and Brian Votolato of Warwick are set to wed September 23, 2017 at the East Greenwich Yacht Club.

In true Rhode Island fashion, Brian and I met, not through ‘six degrees of separation,’ but two at best. And it wasn’t even through friends or coworkers or classmates, but Brian’s mom — who apparently is a great match maker.

To paint the picture, we’ll momentarily flash back to the mid-1990’s when my cousin was getting picked up from elementary school. Her parents — my aunt and uncle — became friendly with the parents of another young girl —Brian’s younger sister. Ultimately, through enough bus stop chats and sidewalk pick-ups, the two families hit it off and could be found dining at each others’ homes one weekend and vacationing up to New Hampshire the next.

Though Brian’s family was very close with mine, Brian and I wouldn’t meet until many years later. Being five years apart in age, until we were older it would have never even been a consideration for us to get together, let alone have much in common to be friendly.

However, the name ‘Votolato’ was always vaguely familiar enough so that it rang a bell one summer when, as tennis captain for my high school, I noticed the name on the roster for incoming freshman. As captain, I was responsible for calling the ‘newbies’ for summer practices. Sure enough when I called the Votolato household, Kayla wasn’t around, but I got the disinterested older brother, who’d ‘let her know I called.’

Almost six years later, during a ‘GNO’ (girls night out) with my mom, aunt, and some family friends that included ‘Mrs. Votolato’ (Anne), the group was working on putting together a team for the annual MS Jet Pull in honor of one of the ladies present. Anne piped up that her son would be around and she’d sign him up. Well apparently there was more to it than just getting extra guys to bulk up our team to pull the FedEx jet…

The day of the Jet Pull, it turned out that due to Brian’s work schedule he wouldn’t be available to participate, but his clever mom convinced him to meet us at the bar for a bite before work anyway.

Out of the fifteen people in our group at the bar, I was the only one under the age of 45; when a young, professionally dressed —very handsome guy — walked in, I took notice. Even better, when Anne looked over and said, “Brian, over here!” the seat next to me happened to be open, and that was all it took. Hair braided, no makeup, arms sore and beer in hand, the conversation quickly picked up and a few days later we were on our first date.

Go figure — one of our mothers introduced us and we were always a family connection apart. We just missed growing up together but, no doubt, we can’t wait to grow old together.

Thank you to both our parents, all our families and so many friends for being part of our fun journey for the last six years — and many more to come! 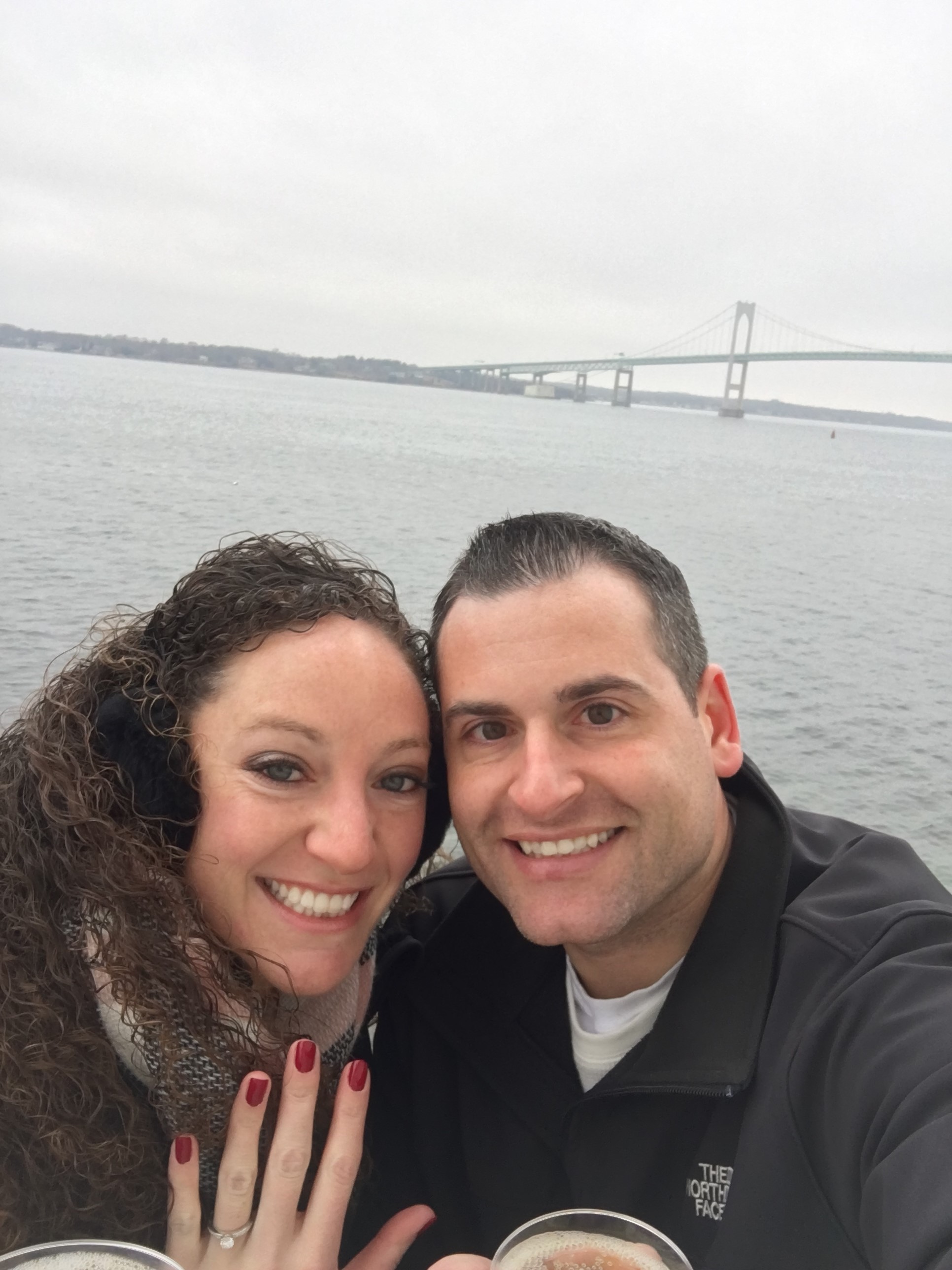 The phrase being used around our friends and family since our engagement has been ‘web of lies’ – every detail covered twice over — but for a worthy cause!

We’d been together for about two years by the time of my 25th birthday. Brian, not particularly one for the dramatics or surprises, managed to actually keep a fantastic one for several months while waiting for my birthday to roll around. He did build up the suspense with lots of teasing, but never cracked.

On November 18th of that year, I woke up to Brian telling me that we’d be staying at Rose Island Lighthouse in Newport for a night in February — we’d be the ‘lighthouse keepers’ and have the entire tiny, charming, historic island to ourselves for twenty-four hours. What a surprise and what a trip we had!

For the next several years we talked about going back for a day trip but hadn’t managed it between odd work hours, ever-changing Rhode Island summer weather, and the everyday things that come up when you think you have free time.

Sure enough, at the oddest time of year, Brian texted early this January that his cousin’s coworker had extra tickets to a company event on Rose Island — a wine tasting no less! Too perfect of a lie, you say? There was a real email, company branding and all, that could’ve done away with any doubt that it wasn’t real.

So we planned the whole day with Brian’s cousin and his wife (Mark & Kim), grabbing a hotel room so no one would have to trek back over the bridges. Brian’s dad was puppy-sitting, had several layers ready to put on… until a text the morning of from Mark saying their 1-year-old was sick all night, keeping mom and dad home. However, “Brian’s name is on the hotel reservation and you’re all set for the tasting, Brian you have all info.”

So we drop off the pup and drive down to Newport according to original plans, heading toward the boat yard we were ‘directed’ to for a ride to the island. After waiting several minutes, I get a little antsy that we may have missed the boat, but hope we’re just early. Right on cue, we see the same boat that took us out almost exactly four years prior. The captain makes a comment about a group running late but he could run us out while he’s waiting for the rest. During the trip we get to chatting about how we’d stayed on the island before and our captain says, being familiar with the place, that we could feel free to wander the island and lighthouse (both very small) while we wait for the remaining guests.

Once on the island we notice a smattering of people we don’t know milling about — clearly also waiting for the wine tasting — so we head off on our own. Trying to remember how to get up to the light room, without disrupting the guests residing in the lighthouse for the night, we end up behind the building with a view of the Newport bridge and Narragansett Bay on that balmy January day.

A split second pause in the conversation and Brian turns to me with a smile and says:

“So, this is a special place for us, and you know you’re very special to me…”

Brian: *Kneels and pulls out a perfectly prepared red box*
Taylor: *Starts weeping*
Brian: “Taylor, will you marry me?”
Taylor: Between sobs and giggles, “Of course!”

After the kiss, Brian stands up — still holding the box and ring — and says ,‘So… do you want it?’ And I proceed to stick out my hand and say, ‘Are you going to put it on?’

For the record, there was no wine tasting… but my clever Brian brought a celebratory bottle of Champagne for us to enjoy while walking the island and me pestering him for all the details of how long he’d been planning, how he roped in the boat captain, had the talk (and a shot!) with my parents the week prior, and managed to pull all of this off.

After the Champagne was done and the January weather started to sink in, we called for our ride in to check in at the hotel that Brian — not Mark — had booked, deciding where to go celebrate first.

At this point I was so excited and ready to start making calls, any beverage at any location with a seat sounded great. While I waited in the car, Brian checked and was pleasantly informed that if we showed our room key next door, we’d get a free beverage — music to our ears! Well, come to find out I would not be making any calls (at least for a while) or sitting — the ‘free drink’ was just another ruse to get me through the door where I didn’t even notice it was packed with friends and family… until they started clapping… and I started crying… again.

After an exhilarating day filled with loved ones, phone calls, pictures and stories, we’re thrilled for what’s to come, to bring our relationship to engagement to long, loving marriage. Cheers to many years! 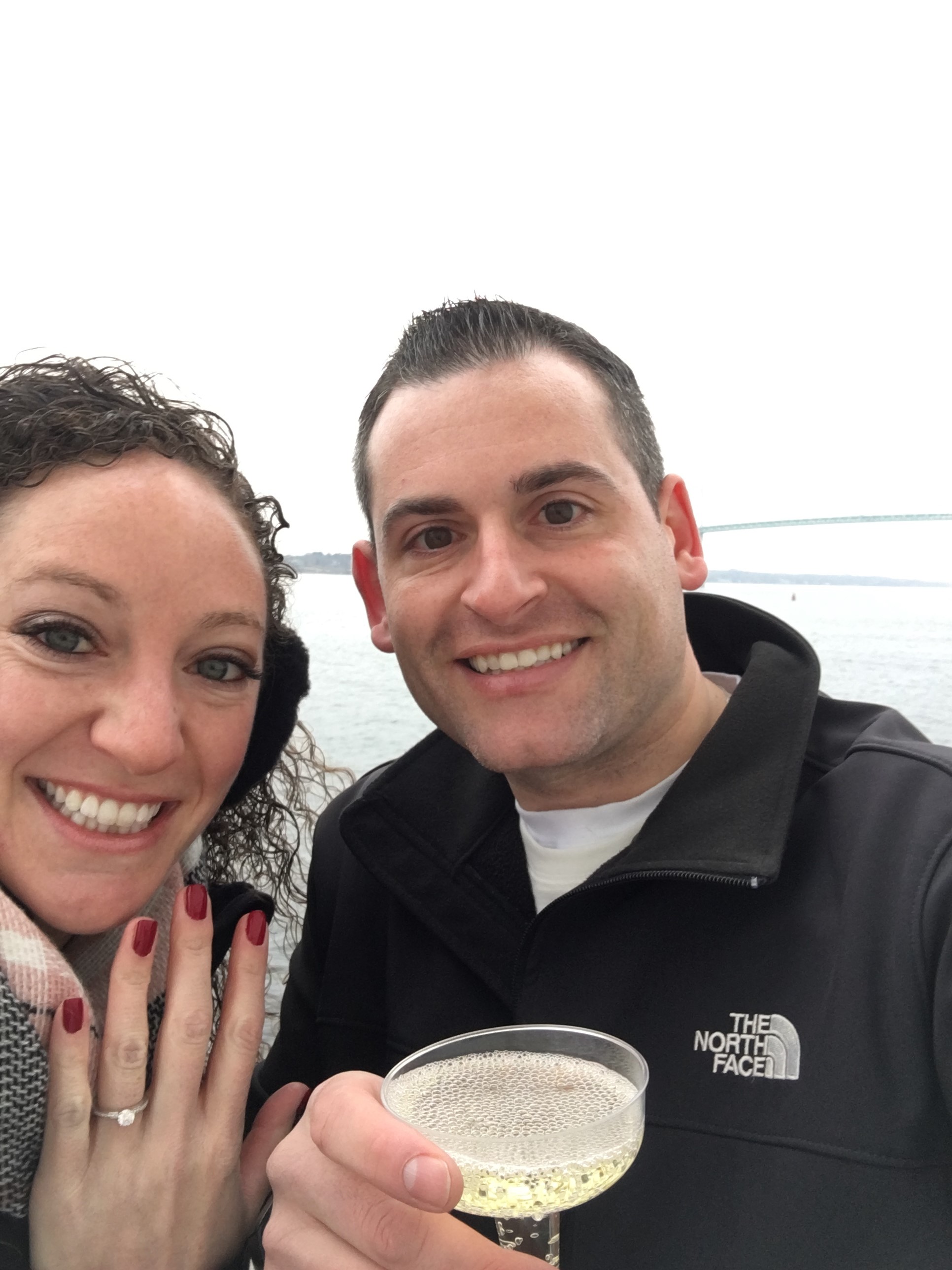